I Bet You Look Good On The Dance Floor

afterwards. You know, get their autograph, take their picture, make out with them on the dance floor. Ok, I personally didn't get to do that last one, but I was close enough to watch!

I didn't do the first two either, but my friend Brenda did. She promised to email me a copy of the pix. Here's my crappy cell phone pic of her autographed ticket stub in the meantime. 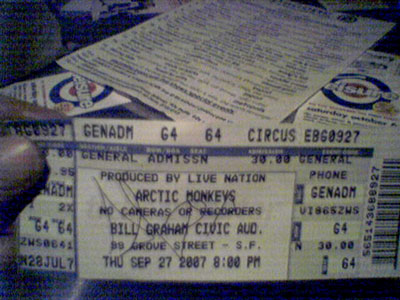 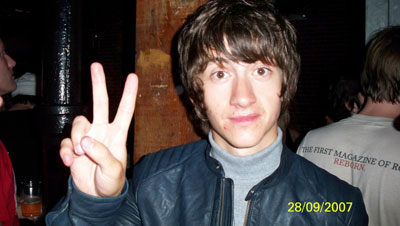 p.s. -- apparently, this is the userpic of someone who is completely undatable. I sure wish someone had told that me a long time ago. Could have saved me a lot of time and trouble.

We can do that anyway. Thanks (e:strip)!

p.s. -- I wish you could be here for :::link::: LoveFest's official mega-rave right down the street from me tomorrow. Then we could hit :::link::: Folsom on Sunday.

Okay, I am seriously jealous of your dancing lifestyle!

I wonder what the deal is with dating? My theory is it is just the guys you date are mostly from online and men that are online are generally after a specific thing. I totally realize that that is a generalization but there is probably some truth to it. You are fun and cute and you have your life pretty together. You must just be looking in the wrong place.

I wish you lived here. Not that it would be easier to find a boyfriend but at least we could hang out and bitch about men over coffee this morning.

So, my 3-5 week part-time contract with Autodesk has already been extended to 11 weeks full-time, and I haven't even started yet. Sweet! Maybe now is a good time to ask for a raise, haha.

Hopefully my background check will come up clean. As long as they don't find my secret blog I should be ok. ;)

you have a little asian girl on display in your office? sounds illegal

Congratulations! --Thanks for the package. I put the little asian girl in my trinket treasure box display case on my mantel in the office.

In The Future When All's Well

That was the best freakin' 65 bucks I've spent all year! 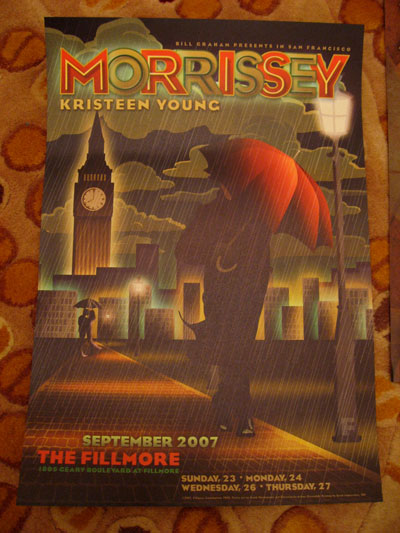 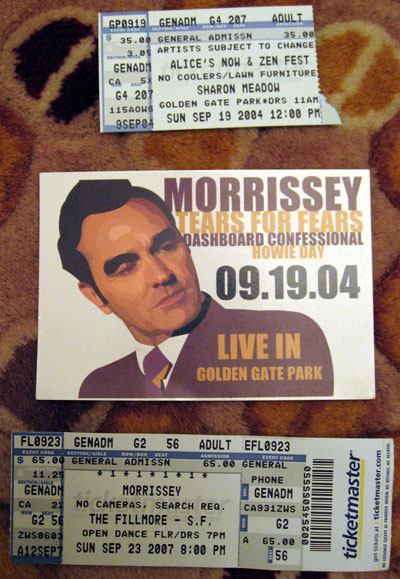 p.s. -- I think the same artist must have done the Editors poster. 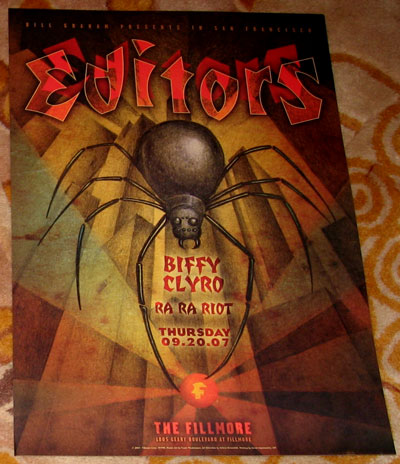 Tonight is my "make up date" with Steven Patrick, almost three years to the day (September 19, 2004) since he stood me and thousands of other adoring fans up due to alleged illness.

This better be good.

a little more up close and personal . . .

Probably the most obvious reason why I don't have a real job is because here I am posting about various topics only of interest to me instead of looking for one. But what the hell.

So, my ex hasn't returned from Burning Man yet, and no word from him. That's not necessarily ominous, since he didn't have a ride back, which means he probably got recruited to help with the clean-up of his theme camp's art installation. Although I don't know how much would be left to clean up from the 1,000-foot fireball of an exploding oil derrick.


Yeah, that looks like a mess. But cool! And maybe a little dangerous? It's not like they can test these things in advance. But I guess that's all part of the experience . . .

In other news, my building-mate did return from Burning Man intact. Thank God! Since the plan I had for his cat to fullfill his financial obligations by co-writing a "Fung Shui for your Cat" book with me has already been done. I'm always behind the curve.

Anyway, as long as I'm posting Youtube videos, I think it's high time you met him. He's the one on the left, and his twin brother is on the right.


Oh, and he didn't actually run into Mark at BM as reported in (e:twisted,40896), he was just kidding about that. Guess that's what I get for owning a building with a comedian, haha.

p.s. -- don't I get a bronze medal for "peep most likely to go bankrupt due to estrip-dependency"? Or maybe that's too long for an honorary title, haha.

I don't run the site but I say why not. However there is a bigger problem as to why you can't get the bronze Medal The Silver and Gold Medalists must be determined first. What if you got the bronze medal and then the next two people wound up being not as good as you then you would have to send your medal back and then the former gold medalist would have to send that out to you and it sure could get awefull messy. Ok so there would just have to be a little programing done but... lost my train of thought so hope everything is going good for you out there.

Jesus Christ. Tickets for Morrissey's "4 night residency" at the Fillmore are priced at $65. And they're already asking $158-183 each on

StubHub, even though they don't go on sale until Sunday 9/9.

Ouch. Doesn't Steven Patrick realize he still owes me from canceling at Now & Zen Fest 2004? Probably not. Oh well, maybe I should just suck it up and buy two tickets at the Fillmore box office, then sell one for $130 and call it even.

ha ha ha ha... are you whining about tickets to a Morrissey show? How... uhm... appropriate.

I will add my whine to that. Last time i saw Morrissey live i came home with a black eye. You think punk shows are rough, try being in the front 2 rows, close enough to be pulled up on stage by Mozz himself and see how many passive frail vegetarian Mozz-a-bes are willing to elbow the person half an inch closer! ha ha ha!!

No Good Can Come Of This

I got word from my building-mate he won't be back from burning man until tomorrow instead of today as originally planned. Oh, and he ran into my ex on the playa. Now, I'm sure there are many more interesting topics of discussion at hand than little old moi. But the thought of my brand-new co-tenant and my 7-year-ex burn-bonding and possibly trading life stories without me being there to defend myself (it's all about spin-control) kind of freaks me out. I guess that's what I get for staying home with the cat.

Update: Turns out he was just kidding about running into my ex (I set myself up for that one). I'm so gullible!

Why did you end up staying home with the cat?

Yeah. Don't ask me to explain this. 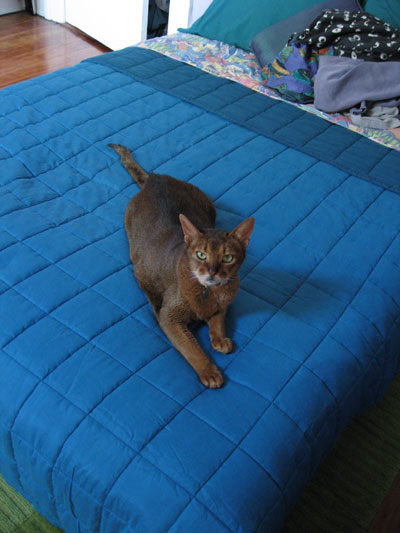 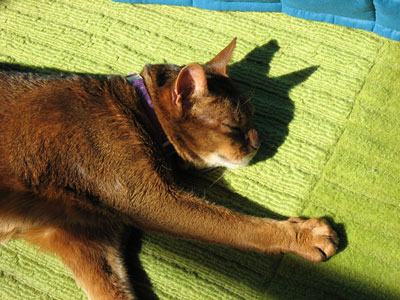 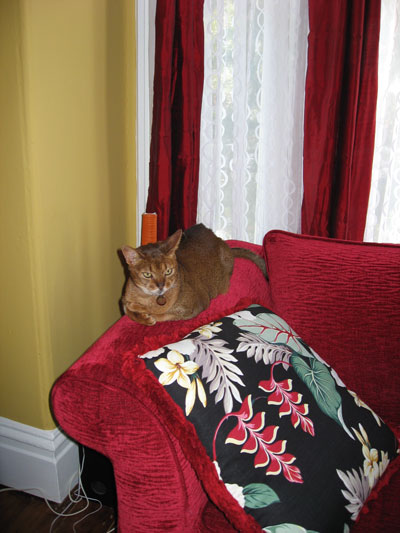 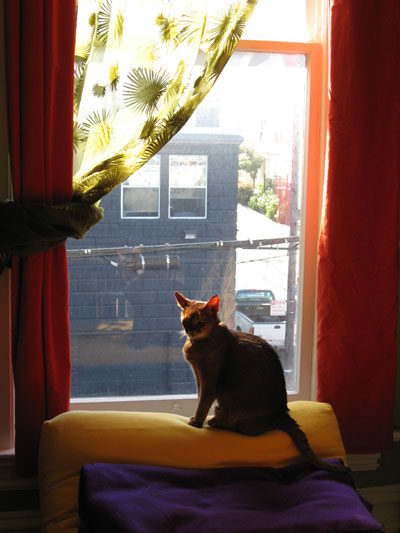 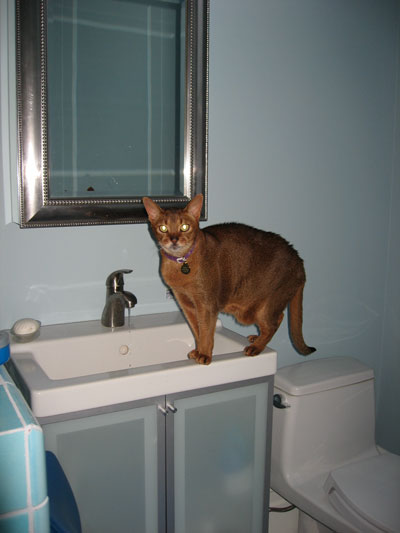 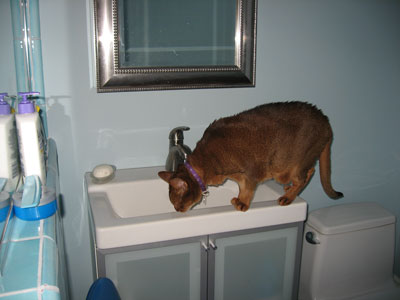 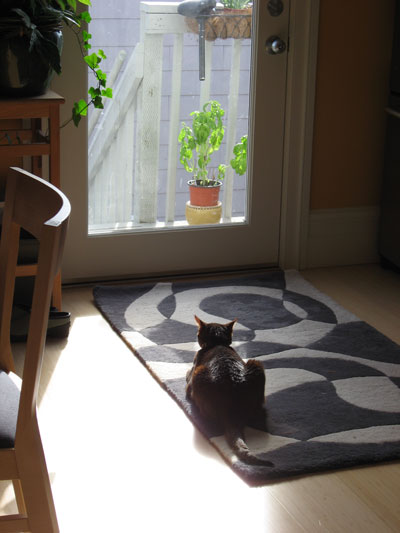 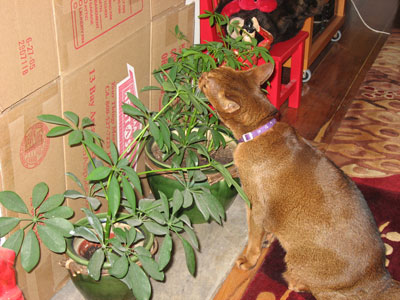 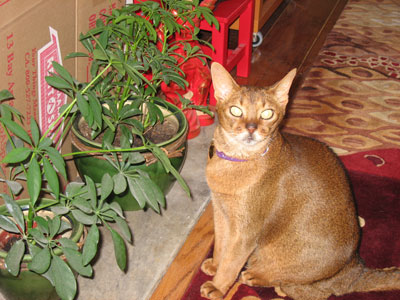 p.s. -- I have an epic craigslist story to tell, which might be interesting on a slow news day. But considering this is a dual-peep birthday weekend, probably not that interesting right now. Happy Birthday (e:Terry) and (e:Mike)!

First of all it is interesting how sometimes we think alike (e:ladycroft) in that first picture I was thinking the same thing but couldn't of the type of "Big Cat" it was. I will admit when there was a fire going in the back at the party at the 24 last night. I did think of ya for a second (not sure of the real amount of time but I think you know what I mean. Before I saw it wasn't your cat I was going to suggest that it starts its own blog maybe it still could I think it would make cat three.

Oops, that link doesn't work because of the (). Check the breed out (believed to be from Egypt) at en.wikipedia.org/wiki/Abyssinian_(cat) .

He's an :::link:::(cat) Abyssinian. They like to sit on your shoulders (seriously!), and this one likes to drink from running water -- thus the bathroom sink shots. p.s. -- I relocated my toothbrush to a safe place. If I'm getting cooties from anyone this weekend it's not going to be the cat, haha.

what kind of cat is that!? it looks like some kind of oriental? that first pic makes it look like a freaking puma ready to puncture your jugular!