Hey (e:Paul), thanks for the [inlink]paul,4175[/inlink] instant website. I know it only took you 2 minutes to code it, but next time, could you give me 10 minutes to populate before linking to it? Who am I kidding, that'll never happen, lol. Anyway, I put some pix of my new 'hood up there

- including one of City Hall lit up at night. That's all I have time for right now. Contrary to popular belief, I do have a life to live here. So I'd better get back to it.

Already behind the curve

We heard from people that they have a strong desire to stay close to the people who are important to them, but at the same time they didn't want to feel like they were exposing themselves online," said Julie Herendeen, Yahoo's vice president of network products.

Although many critics continue to dismiss blogs as mostly prosaic rambling, 27 percent of online adults in the United States read them and another 7 percent write them, according to a study by the Pew Internet and American Life Project.

For 11 years, Justin Hall was dedicated to documenting his life online. Composing more than 4,800 pages from nearly a decade of constant writing, which he posted on his site,

For Hall, nothing seemed to be too embarrassing or too personal to write about -- with photos and links. From romantic relationships to his father's suicide to a bad case of shingles, he shared himself with a fairly substantial audience. Thousands of people read his site every day.

Then, in mid-January, he made a short film called "Dark Night'' and released it on the Internet. He replaced his ever-changing home page with a fixed red heart filled with question marks.

And like that, his Web site moved from the present to the past tense. He left a search bar next to the questioning hearts, letting readers sift through the archives.

I read this article

about LiveJournal last week, and it prompted me to create an account there to check out "the competition." They're also revamping their Terms of Service now that they've been acquired by Bay Area blogging tech company Six Apart (home of Movable Type), and I was curious about that too.

Here's my one and only LiveJournal post so far. I can't take credit for the userPic. That was (e:estrip)'s old Second Life avatar before I gave her a digital makeover[inlink]estrip,6[/inlink]. 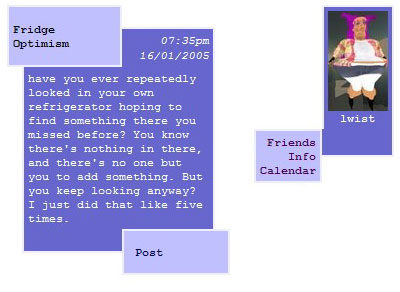 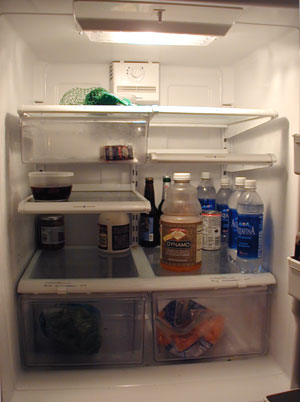 (Just in case you thought I was exaggerating.)

Have you guys seen the Internet Archive?

It's sketchy at best, but you can find some tidbits from the past.

The Internet Archive is building a digital library of Internet sites and other cultural artifacts in digital form. Like a paper library, we provide free access to researchers, historians, scholars, and the general public.

People can call up a business listing to find contact information (with an Internet-to-phone dialing service), reviews, a local map and a photo of the business' facade. With a feature called "block view," people can also click to see adjacent businesses or surrounding neighborhoods.

To accomplish this feat, the company has sent a handful of vans onto the streets of America, touring around with digital video cameras strapped to their rooftops. The cameras are synchronized to a Global Positioning System (GPS) receiver so that A9 can map local addresses to their images once recorded onto a computer hard drive. Because GPS can be inexact, the company has proprietary software to further map some images with addresses.

Internet goes to the dogs
Calling all canines -- Dogster.com is the online spot for Spot

Cubby from New Jersey has a passion for peanut butter. Dedeaux from Baton Rouge likes to suck his brother's ear. Spike from the East Bay just wants to kiss pretty girls.

Two months after a group of self-described computer and canine geeks in San Francisco launched a social networking site for dogs, thousands of furry ones have their own Web page, complete with mug shots, personal stories and listings of likes and pet peeves.

The online site, called Dogster.com, went live Jan. 12 (2004) with fewer than 100 dogs. As of Friday (February 27, 2004), there were more than 8,000 dogs posted on the site. Hundreds of new pooches from around the globe are added daily. There are dogs from far-flung countries including Malaysia, Afghanistan, New Zealand and Croatia.

In its quest to identify the programming elite, Google recently inserted an unusual aptitude test in such magazines as MIT's Technology Review, the Linux Journal, Mensa, Dr. Dobbs and Physics Today.

The 21-question test includes such geek brain twisters like, "How many different ways can you color an icosahedron with one of three colors on each face?" and "On an infinite, two-dimensional rectangular lattice of 1-ohm resistors, what is the resistance between two nodes that are a knight's move away?"

The test also includes more subjective, tongue-in-cheek requests like "Write a haiku describing possible methods for predicting search traffic seasonality" and "What is the most beautiful math equation ever derived?

Google also has this employee benefit going for it:


Here's the real insider's view: "Google employees must have the sweetest bottoms in the high-tech world. The women's toilets at Google were over-the-top, Toto bidet/toilets. They sprayed, fluffed and warm-air-dried.'' Never mind the IPO and pending piles o' cash; no wonder everyone there's in such a good mood.