Down the rabbit hole

[inlink]haikuster,30[/inlink] No way (e:haikuster) ! Cool, I'll look for you guys there. My first ever in the flesh (e:peep) encounter.

I'll email you when I know what my disguise will be...

Damn, those Halloween pictures[inlink]matthew,422[/inlink]are cute. Why couldn't my nephew want to be a fairy princess for Halloween?

I'm supposed to meet my friend at the local sports bar (you won't hear that from me often) to watch the Red Sox, then possibly go see her friend's band play locally. I think I'd rather stay home and work on this costume. On the other hand, I'm supposed to be keeping her out of trouble while her spouse is out of town. Which means she'll be buying to keep me quiet. Hmmmmm...

PJ Harvey show was pretty great. The crowd really loved it. Didn't turn me into a fan, although I definitely have a better feel for her sound now. Reminded me most of Siousxie, although that could be because I just saw her in the same venue last month. I can also see the comparisons to Patti Smith. PJ's music just doesn't resonate with me the same way. That's just me, though.

On a good note, the Warfield started giving out free posters again. Somebody's already selling theirs from the Thursday show

(note: CL link won't last long). Ha! That's funny. Maybe I'll sell mine - I can use the money for my next concert ticket.

On a not-so-good note, between meeting at the bar, quick/cheap/good dinner at Naan 'n' Curry, and strolling through the oh-so-scenic Tenderloin neighborhood

to the Warfield, I got to sidestep guys peeing in the corner on two separate occasions. What a treat! I'll take a virtual trip to the men's room with (e:Paul) over that any day.

Which reminds me, congrats on replacing the dubious (at best) remnants of crap code with 100% authentic Paul Visco code. Maybe you should copyright that for your code library.

It's volcano costume do-or-die weekend, so only expect occasional bursts from me while I recaffeinate.

Winamp TV[inlink]radio,68[/inlink] is seriously fun. Thanks (e:radio). Just what I needed - another way to waste time on my computer. Thank goodness they don't have a Golden Girls channel. Now if I just had that 23" cinema display monitor... ;)

My friend Steve (Halloween guy and videophile) made a cooking show spoof all about using your garbage disposal to prepare a meal. It was pretty funny. Kind of like the SNL bass-o-matic sketch

except no fish were harmed. (Note to vegans and fish lovers - link just goes to a transcript. I don't recommend watching the skit. I had to avert my eyes myself.)

The bass-o-matic does share one of my core tenets of cooking - using the fewest possible utensils, appliances, dishes, pots, pans, etc. Now there's a cooking show concept for you. If I could prepare, cook and eat an entire meal off the same plate, I would so totally do that.

PJ Harvey tonight. I've never gotten into her for some reason. It'll be interesting to see how I like her after shelling out $30 to see her live.

www.slowwave.com, a collective diary of dreams submitted by different people from around the world and drawn as a comic strip by Jesse Reklaw. You can submit your dreams there and they may end up in his weekly comic strip, although neither of mine did. Oh well.

The strips are archived

going back to 2002.
I even bought some of his self-published dream comic books

will give you some insight into how he chooses which dreams to draw.

this journal entry brought to you by...

Pre-movie commercials don't go over well in the Bay area. I saw F9/11 at the Grand Lake (which publicized on the marquee they would not enforce the "R" rating), so I didn't have to sit through commercials myself. But I thought it was pretty funny when I read the F9/11 audience at the Sony Metreon hissed during the commercials there. They really picked the wrong test audience for that.

Hot Tip: last time I went to a Landmark Theatre, if you spent $18 at the concession stand, you got two free movie passes. That was in Berkeley. LA and NYC contingent might want to keep an eye out for the same deal there.

p.s. - I love the new superfreakin'cool spellcheck. Maybe you should trademark that.

Congratulations on completing ComedyTrafficSchool.COM!! We will process
your certificate immediately. Below is your proctored final completion
confirmation information, save this for your records. We hope that you
have enjoyed our course, TELL A FRIEND!! Thank you for choosing
ComedyTrafficSchool.COM...and remember, the gas pedal is on the RIGHT!!


They were the only ones who listed an approved test proctor center right here on my little island of Alameda. Clocked in at 11:59AM, punched out 6 minutes later. Quick stop at the farmers market and home in time for lunch.

One bad thing about living in California is the threat of wildfires in the fall, especially when the northwesterly winds suck all the humidity out of the air after five months of virtually no rain.

We woke up Wednesday to the smell of smoke from the wildfires in Napa and Yolo counties. 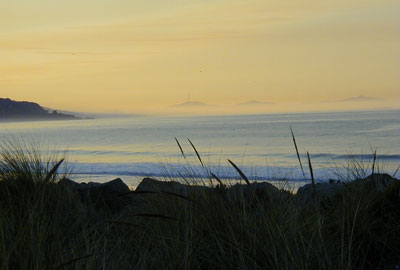 Yellow haze at Stinson Wednesday AM. You can still make out Sutro tower in the distance, but the air quality was lousy most of the morning.

Yeah, there's something about this time of year there especially. Here's a link to pix of last year's Rhinebeck Halloween festivities:

It's funny - my friends Chris & Monique bought the place in Rhinebeck shortly before I moved out here, and that's become the weekend/holiday getaway gathering spot ever since.

Hmmm...I may have to rethink my "holiday" plans after all. I'd love to see my old gang again.

Ghost of Halloween Past

Time to get motivated for Halloween again. That week at the beach threw off my seasonal time clock. I really do miss having a full-fledged Fall season. At some point, in the spirit of balanced reporting, I'll write up a list of all the things that suck about being in the Bay area, and that'll be on it. For now I'll have to be satisfied with (e:Matthew)'s [inlink]matthew,412[/inlink]glorious pix.

My local Halloween party hosts for the past 2 years aren't going to have a party this year, and the host from the year before that moved out of state. So we're having a Halloween party crisis here. I should just have one myself, but now I'm sorely tempted to go back to Boston/Rhinebeck NY where I know my friend Steve will be pulling out all the stops for his party, which defies description. Here are some stills from the video Steve made one of the years his party was at my house. 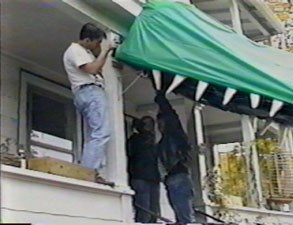 That's my ex-boyfriend, Mark (before he was my boyfriend) attaching the dinosaur head to my front porch. (Once a guy has screwed a dinosaur head into your front porch you might as well give it all up to him, right?) 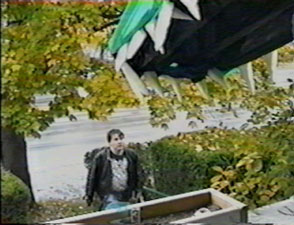 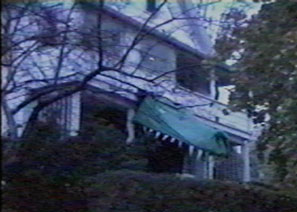 View from the neighbors. 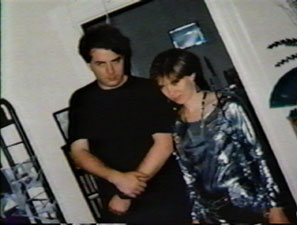 Steve & me. You can't tell from this still, but here's another of my infamous conceptual costumes. Silver base with a bunch of junk computer parts/media (resisters, hunks of motherboard, optical tape, etc. scavenged during my system manager days) attached to a clear vinyl overlay. People kept asking me if I was supposed to be Barbarella. You'd think I would have learned my lesson then, but no.

I was pondering the Boston vs. self-hosted party options with my music buddy last night (R.E.M. concert was great, BTW) and he asked me if I've been to Halloween in the Castro. I've wanted to do that since moving here. This might be the year.

Halloween in the Castro

Hey, will the Bot be able to give Site Status Updates during the [inlink]news,510[/inlink]outage? I'm going into withdrawal already.