I'm going to see R.E.M. at the Greek Theatre

in Berkeley tonight. I can't wait. It's a great place to see a show - I saw the Pixies there last month. Possibly the most magical convergence of a peak (in my opinion) performance, incredible setting, and crowd being totally into it I've ever experienced anytime anywhere. I was at the Saturday 9/25 show. Here's the set list if you're interested. Apparently they change it around for every show.

this just in / marine mammal rescue

Whoa. my friends just called me on their way back from the beach. They said I left too soon - they got to participate in the rescue of one of the sea lions that were frolicking with us. It was really amazing (the frolicking, that is). All of a sudden this sea lion's head popped up not 15' from me. He was just checking us out. Then he went and got his buddy and came back. My friends were giving me a hard time about having to experience the moment first hand instead of through the lens of a camera, so of course then I had to go get my freakin' camera and try to get a picture of him. I probably spent two hours trying to get a good shot of him and his (by then) two buddies. Not easy to do with my camera because of the shutter lag time.

Anyway, they got to name him so we can now track him. They named him Kolby since it has the initials for all our names (Kathy, Lisa, Brenda). Great, now I have a sea lion named for me and my homies. ;-)

I don't know when he'll show up, but look for Kolby here:

Here's the best pic I got of him. Maybe he was trying to communicate telepathically with me and I was too busy playing Nat'l Geographic photographer to notice. Damn!

p.s. - I know, I know -- I've seen more convincing pictures of the Loch Ness sea monster. But take my word for it, that's a sea lion.

back to reality / traffic school

Well, I'm back from my extended stay at the beach. My friends seem to think my presence keeps their relationship on stable ground. I think it just gives them a reason to avoid getting into it, which isn't necessarily a good thing. It's kind of weird to be the third wheel in a lesbian relationship, but it seems to work. We're all getting something out of it for now anyway.

So what I really should be doing now is picking which online traffic school to "attend" so I can avoid getting a point on my driving record and having my insurance skyrocket. Yeah, I was bad. I actually ran a red light - my first moving violation ever! Not counting those two speeding tickets of course, which I had perfectly legitimate excuses for. Anyway, I was just pointing out Japantown to my out-of-town friends when the damn light changed and I didn't see it. I know that's not a legitimate excuse, but I was hoping for a little leniency seeing as I'm not a chronic offender. In Boston, three cars would have gone through right behind me. I know that doesn't make it right either, but it would be nice if that could be factored in. No such luck.

Postcard from the beach

No, I didn't bring my laptop. Just a quick pitstop at home, then I'm driving back up to Stinson after a thing in SF tonight. 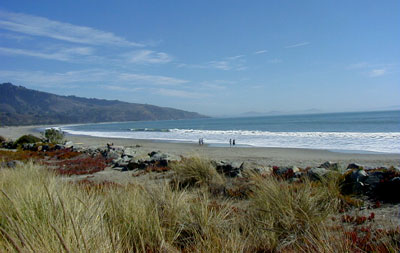 Looking left toward SF from the beach house. 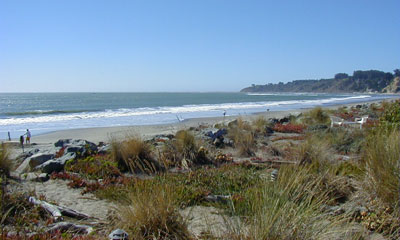 Looking right toward Bolinas from the beach house. 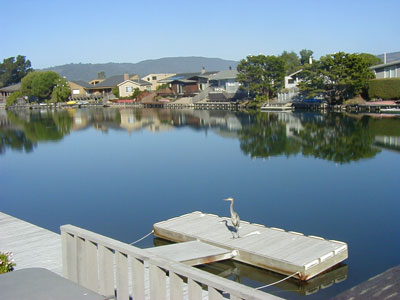 On the lagoon side of the other house. A blue heron was standing on the neighbor's dock, and there are a ton of snowy egrets in the trees across the lagoon (also some cormerants, but you can't really see them in this pic.) Also saw lots of pelicans, but no great shots. Maybe later in the week. 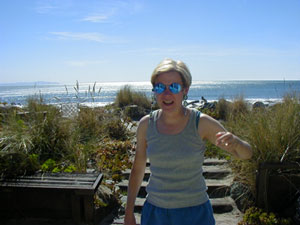 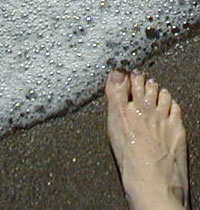 Couldn't resist getting the scoop on the wedding while I'm here. Looks like a great time! Best wishes to the happy couple!

Time to get the hell out of Dodge and clear my mind. My friends are trying to convince me to stay for the whole week, and I just might do that.

The northern California coast is really beautiful and accessible. Just jump on Hwy 1 and you're hugging the narrow curves cut into the cliffs of the coastline with no barriers between you and the Pacific. It's just incredible. The beaches (near me at least) aren't built-up at all. And there are plenty of secluded spots along the miles of CA coastline where you can just pull over and claim your own private refuge. 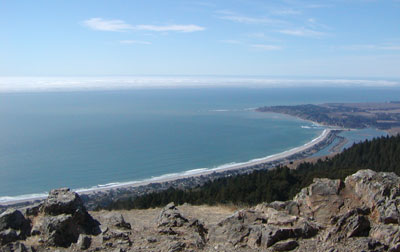 My mother always registered as "unaffiliated," saying she voted for the person not the party. Anyway, I liked the premise enough to start doing that too, although it's a pain in the ass and I can't imagine I could ever vote any way but Democratic. So why the frick did I do it? I don't know. Because I liked the fact that the option is there, I guess.

I still like the concept, and it was kind of fun throwing a curveball at the volunteers manning the voting booths, but in practice I've found I have to be very careful to check what it really means in my state

every time I vote. Just when I thought I knew how screwed up the election process was, I find yet another way. (damn! didn't want to turn this into a rant. "La-la-la happy-place la-la-la...." Not working.)

All right, one last point, this time applying the logic I thought was inherent in the "unaffiliated" political label to sexual preference. Now that I live in the land of "pansexuals" and "heteroflexibles" et. al,

it occurred to me: wouldn't it be refreshing just to be sexually "unaffiliated?" Fall in love with the person, not the gender? The rest is just logistics.

Crazy, I know. And the distinctions/labels do make it easier to communicate. But I still like the idea. Anything that widens the field for me right now sounds good.

<disclaimer> the above content is not in response to opinions contained in any other journals. just random musings. if I've offended anybody for any reason, believe me that was not my intention. </disclaimer>

Oh, and to top it all off, instead of politically "unaffiliated" they now label it "decline to state," like you're hiding something. ("La-la-la happy-happy-place...." Damn.) Anyway, I won't be doing that any more.

In the Beginning...was the Command Line

(e:paul), [inlink]paul,2031[/inlink] wow, you aren't kidding about the social-techno freak thing. And I mean that in the most complimentary way. ;)

In the Beginning...was the Command Line by Neal Stephenson? I should preface this by saying I haven't read it yet, although it's been in my amazon wish list for a while. My lame-ass library doesn't have it, and right now my entertainment budget is largely limited to what I can check out for free.

Anyway, turns out it's also online. Ha! Now I can read it. This is really old school stuff, so may not be of interest to anybody else here. I'm still stuck on the Apple vs. MS wars.

Here's the link if anyone else wants to check it out:

I didn't get to make any costumes for Burning Man

this year because my ex-boyfriend and his brother didn't go. I sewed two huge banners for their camp last year, along with various other acoutrement befitting the occasion. 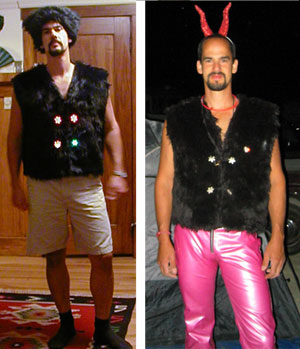 Carl (my ex's brother, and my first roommate when I moved out here) wanted a fake fur vest with flashing buttons, matching hat and thong. I couldn't get him to model the thong for the picture so you'll just have to use your imagination. Final fitting on left, ensemble variation on right. I wish I could take credit for the pink vinyl pants, but I had nothing to do with that.

I have a weird habit of making abstract costumes inspired by some material. One time before my ex was my ex, I had carte blanche designing the Halloween costumes because he had a last minute trip to Germany. So I find these blue glow sticks in bulk and, well, the result is below. 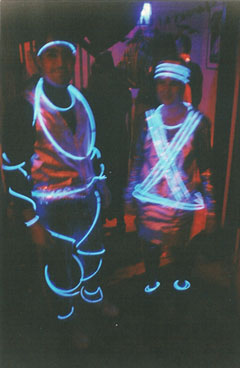 Anyway, despite his jet lag or perhaps because of it, Mark went along with this. Although he did make an interesting point I hadn't thought of. He said he doesn't like wearing costumes where people have to ask you what you are. Hmm. I never thought about it like that. I guess I like to leave some room for interpretation. But that's just me.

My nephew wants to be a volcano for Halloween this year. Last year he wanted to be a tornado (he's got a thing for meterorology). I put my money on hurricane for this year, but volcano won out. I'm sure it was a tough choice.

We're trying to schedule a netmeeting to discuss his vision for the costume. It's amazing how booked a 7-year-old's schedule can get.

I felt pretty good about the tornado last year, but in the end it didn't quite live up to my expectations. I hope to do better with the volcano. I might need an FX budget to really pull it off. 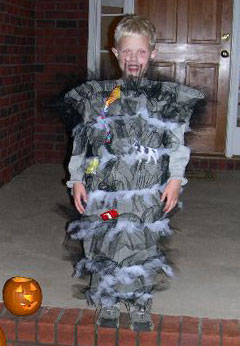 As you can see, it kind've looked more like an inverted Can-Can costume, which wasn't what I was going for at all. You really have to be close enough to see the props caught in the tornado (cow, kite, umbrella, car), and controlled lighting would help. To compensate, I added the infographic below. He was fascinated by how I made that. Go figure. 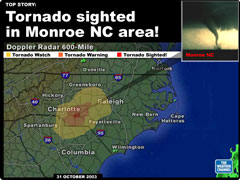 The year before, he and his sister wanted to be secondary characters from Clifford. You can buy a Cllifford costume at any KMart, but they wanted to be T-Bone and Cleo. So back to the cutting board. 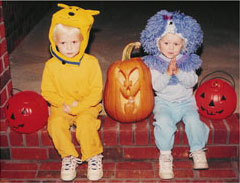 I keep thinking maybe this year I'll start early enough so I'll have more time for my own costume. I've been envisoning some kind of dramatic cape that could also double for goth shows. Even when being mysterious I'm still practical.