i feel horrible. i saw some advil in the kitchen. i need it. just getting in a little while ago. Had Mega FUN last night - my last night living in Buffalo spent with the peeps!

not so fun was when I got in the car this morning it was ravished! someone had been in it and went through the glove compartment and all...

I don't keep much in there but I had an old cd player and tape adapter. they took that. losers. its so wrong to steal and take whats not yours!!!

Wow, what a wonderful evening @ the (e:estriphouse)! The peeps represented in full costume. ps. DR. Chlorine wants the community to know that he and (e:Rachel) are just friends. However, he says, if she were to wear eyeliner and perfume she would be all his...

so anyway, speaking of Dr. Chlorine came dressed as Darth Vader, Jim came as Charlie Chapin, (e:) Mike came as Captain Planet, (e:) Jill came as Margot from the royal tenenbaums, (e:Tina) and (e:) lilho came as Brit Pop Chics (but I told them they look like escape convicts from a hot lesbian women's fashion prison instituion!)(e:Rachel) came as a satanic catholic school girl from another realm; (e:Trisha) came glammed out as always & accompanied by hubby (e:paulnotpaul). and then there was (e:) Springfaerie all glittery with big beautiful wings that were purplesque! oh and there were others too, like Juan Valdez, the coffee man & then (e:) southernyankee (me) came as temptation with a capital T as described by (e:Dr). Chlorine (you know how that goes) I really looked like Minnie Mouse with little devilish horns, apparently I cannot be as evil as the package looked!!!

Captain planet has returned to his normal look. (e:Mike)!


Before I arrived, I stopped by my neighbors party and Melissa was oh so fabulous!!!
decked out as a cutey queen witch

lots of fun was had by all...of course loads of dancing!!!
I will totally miss seeing everyone and having a good time in life with you on a regular basis. but there are always visits!
I don't know what I am still doing up. drinking champagne and all when I have loads to do... I have never drank champagne out of a smirnoff bottle - how crazy is that. you know the party is crunk at that point!

I have a headache now. I need to nap for four hours.

The next few days will be off the charts nonstop!!!!!!!!!!
I need to be up by seven thirty or so... I had to spell out sevemthirty since I don't know where the nuimbers are right now. two many chocolatini's courtesy of (e:Paul).

a tragedy has finally been put to rest..

no more friday mornings. no more crazy involvement. no more BigBee.
I feel the devil lifted off my shoulder!!! Who would have thought it would have gone this far? well, I guess everyone knew so no thinking necessary. I didn't. whatever. spare the details. its over.
i can progress now and not continue to drag around a dead baby - yea~~~ ole!

i just watched the garbage truck digest the futon.
"mmmmmm... me want trash!" said the truck

hmmm,
my commute to work
will now be an hour & 10 minutes.
how fun is that? 8*
walk across arlington blvd
catch a bus to a train station
or bike to a train station (which means
I need a decent bike lock)
train it to the metro center station
to transfer to the red to arrive @
Union Station 25 minutes late for work
Thats a good foot to start on isn't it?

Sounds like I need to invest in a
better coffee brewer/no time to grab
an $2.00 cup a day along the way !

. I thoroughly enjoyed my evening on the town with (e:PMT) sunday evening!!!
I had dreams about those dancing dudes(the less naughty kind). I dreamt they went to school to learn what they do and there were a couple of other people I know from the elmwood way secretly enrolled in the same classes. Why I was there I do not know.
I still don't know what I think of them...It was interesting nonetheless. For some reason I couldn't bring myself to "get to know them better"... Perhaps there is still some prudishness left in me...hmmm, well, ok.
I still had fun because I got to spend time with the guys on the town before I head out. Thank you Guys!!! I had a blast. I too paid for it yesterday as I was exhausted and made a few oopsie daisies (correctable ones) but still...

So today is my last day @ the old grind mill in cheektowaga - gonna trade it for another less taxing one (at least I hope). Whoo Hoooo!!!
I must say that I will miss the carpooling with (e:Terry) and the fact that we go into work in the afternoon and the "stuff yourself like a fat turkeypig" lunches we buy everyday and the"peeling out of the parking lot race" just to make it to the square on thursdays and a of course the stickybun coffee that I indulge in from time to time @ the local Crafts by Fran Shop in the office park.

Things that I won't miss:
1) Grumpy Co-workers
2) Stretch Pants
3) The PHONE!!!
4) Stupid Rules that are made to run circles around your mind
5) FURLOUGHS (well/eh... I will want it come 2 months down the road-hee hee hee)
6) Slightly Crappy pay for work performed
7) Cheektowaga
8) IRS Training classes
9) did I mention "Stretch pants"?
10) oh yeah, the crazies !!! "You will Feel the Wrath!"
11) undefined rules and regulations that govern the work performed upon which you are evaluated on... "Good Interpretation worker #267u89r08a*go1343ob9654e8787r!"
oh no, I have gone over the the limit for TOP TEN!!!

Just had wonderful sushi dinner at the Crispy Roll - Yuuummy! Now I am working on some sexual healing in a glass!!! Matt just went to the potty and he said it was bad--smelled like wet dog(eww) I like nice potty rooms-this is a cool martini bar where we are right now. There is a fireplace, preet light chandelier like things, a stained glasss window with an owl and swayed curtains draped everywhere, happenin' trance music - very ambient! Now we are working on our second martinils. I ordered an Esotterica for round 2.catch u on the next post

(e:Mike), I haven't forgotton what we are supposed to go see this weekend...
Are you excited?
Are you avail tomorrow in the afternoon time of the day?
hit
me
up
!!!

I need a break from packing while the apt is being viewed.
anyone still interested? see link here for details of apartment for rent:
[inlink]southernyankee,84[/inlink]

more pics from party.
no specialcommentary input
my press secretary was out of the office today 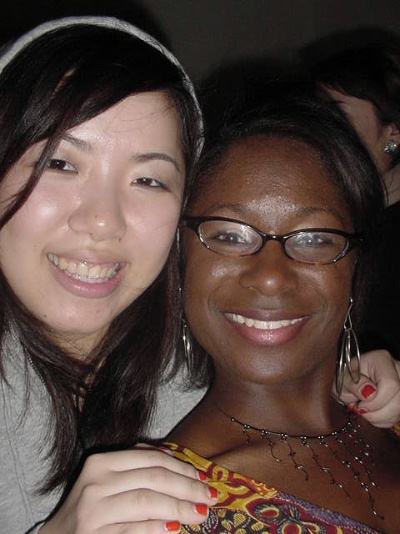 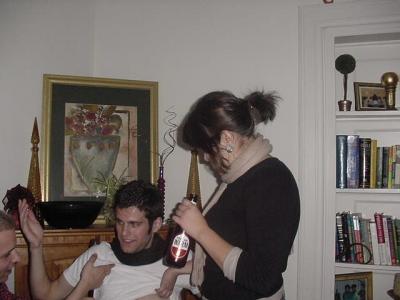