This is my first attempt at posting pix, so we'll see.
Unfortunately I didn't think I'd be able to take a camera in, so all I had was my phone. Then of course they didn't check bags, so I could have taken my camera after all.
Oh well.
But it was an awesome show.
Got a little political at times.
But they did a lot of Lennon/Beatles tribute-y stuff which was cool.
I'd always heard they put on a good show- and they definitely do.
So glad I finally got to go.

Was anyone else there? 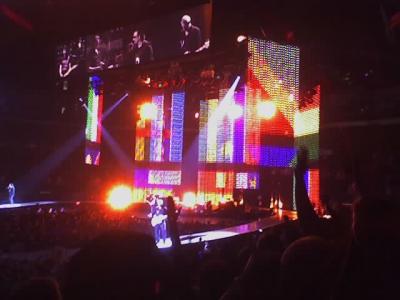 your pictures look pretty good from a sell phone. not to mention your seats seem close to the stage. which is good considering i saw them from behind the stage on level four of madison square garden in NYC. HDnet plays the chicago show from time to time in HD, which is cool to watch, and not as political as the buffalo show was. DT

I generally have the worst luck in the world, but for once, maybe I got a break!
I've been asleep on the couch all day today since I was on call last night, and I almost didn't answer my phone when my friend called. But I did, and now I'm going to U2! I've always wanted to see them, but screwed up when the tickets went on sale and missed out. I think I owe him $200, but oh well, fuck it, only live once- it can be my christmas present.
:) :)

Not sure if it's TOTALLY depressing, or has a little optimism in there somehow. I just hope they're right.

But here's my song.
I'll share, in case anyone else out there wants to feel lonely and mopey.

I once knew a girl in the years of my youth
With eyes like the summer: all beauty and truth
But in the morning I fled, left a note and it read:
Someday you will be loved

You'll be loved you'll be loved
Like you never have known
And the memories of me will seem more like bad dreams
Just a series of blurs: like I never occurred
And someday you will be loved

about a year ago I had a super intense crush. Married. With a kid. That knowledge was such a bummer..

screw married crushes. That shit sucks. still nice to look at though!

But I'm cranky and work is killing me, so I will keep the rantings to myself for now.
This time I will just say hello. :)

Welcome to the wild world of estrip journalling, Jenks.

Fear I may have overstepped my bounds.
Maybe stepped on some toes.

For that I'm sorry,
and I take my leave.

What? Don't go. You haven't fallen for me yet!

So once in a while (generally when I have more important things that I should be doing, like now), I like to think about my skills, etc. What am I good at, what do I have to offer, what am I horrible at [answer: boys]? And I've decided that some things, generally considered negative traits, may actually be talents.
For example: procrastination.
I have finely tuned my keen ability to waste time, and have turned it into almost an art form.
I have just successfully wasted my whole two weeks of vacation. As always, I took books home with me, with the noble intent to study. Did I? Not a lick. But the dogs NEEDED to be played with. A lot. Every day. My sister and her new husband NEEDED me to drink beer with them. I mean really- that would be rude to say no! Those emails from my ex: they NEEDED to be read and re-read and analyzed and cried over, and then responses composed that will forever sit in the Draft folder. That's fun! And that first season of Lost, all 25 episodes- well that REALLY needed to be watched. Because honestly- if I haven't watched the first season, I can't watch the second season, and if I don't hurry up and watch the second season, my Tivo will be full and will start self-deleting things like Arrested Development, Nip/Tuck, and Gray's Anatomy. And that would not be good... (I am also especially good at rationalizing ridiculous things.)
So I thought I would come back to Buffalo on monday, but my parents bribed me into staying longer (by feeding me and buying me things). So I came back with only 3 full days left to myself. But that's LOTS of studying time. I mean, the test isn't until the end of january... no need to give myself an ulcer over it yet (even though it is probably the single most important determinant of my future career). So what did I do with my three days?
Waste time on the computer seeing if I could get my webcam (that I have never really used or cared about before) to broadcast online (because so many people care what my bookshelf looks like). Rip my CD collection into MP3s. Read craigslist. Check out my brother's skanky friends on myspace. Stay up too late. Drink FAR too much, which thus required spending the whole of yesterday in bed, afraid to roll over or answer the phone for fear of bringing back the pounding in my head. And then going to "pick up my car" that I had left downtown due to massive drunkenness, which turned into several more drinks. But really, my friends had missed me, they needed me to regale them with fascinating tales of dog-playing and beer-drinking and lost-watching.
So today... today was REALLY the day to study a lot. So I got up "early". Made coffee. Unpacked from vacation. Watched tv. Checked out myspace. Chatted with my friend in australia. Decided it was time to deal with the pile of laundry that covered my bedroom floor up to my knees. (why do I hate folding sheets so much?? That task was quickly abandoned in favor of doing dishes.) And of course, what better day to decide I need a blog. I never even got around to my other near-patented skill: fake studying. Fake studying involves laying out lots of books and notes and pens and highlighters, then making snacks/coffee/tea during many "breaks". To the point that it looks like i'm studying, but at the end of my designated study time, I have read about three pages. Whenever crunch time comes near, suddenly I invent all sorts of things I need to. Things i usually hate, like laundry and grocery shopping are suddenly very appealing. I suddenly feel urges to rearrange my underwear drawer and balance my checkbook.

So now it's nearly my should-be-bedtime. (but I'm sure I won't go to bed til 1). I have done nothing I should have, and tomorrow I have to start getting up at 4:30 again, and working 30 hour shifts and fun stuff like that.

But hell, that's what vacation is for, right?

But I think the real art to my procrastination is that I have learned to postpone negative feelings. Running late, stuck in traffic, going to be totally late for work? Don't get pissed... nothing you can do about it. It's out of your control. Enjoy the traffic and the music and don't worry about the shitstorm at work until you get there. Consciously did something you shouldn't have? Well don't let the guilt ruin the moment... Might as well at least enjoy your misbehavior, let SOME good come out of it...

Yep, that's me. Master Procrastinator. If anyone wants lessons, I'm sure everything else I should be doing can wait.

The art to folding a sheet, it to not fold them. Roll it, wad it up into a ball-like shape.. it saves time to procrastinate on more important stuff :)

Well, here I am...
Guess it's time to say hello.
I have never had a blog, since I don't consider myself much of a writer, and am completely UNcreative. I could talk to a wall for hours, but when it comes to writing- I'm not sure I have much to say that anyone would want to read.
But I heard about (e:strip) a while ago, and thought I should check it out.
So I've been lurking about for a bit; checking out all you (e:peeps)... A little stalkerific and creepy, I know, I apologize.
Then last night I saw familiar faces out... Even shared the bathroom line with you... And I felt like I knew you, and I should say hi- until I realized that you have no idea who I am.

So, hello everyone!
I'm Alex.
I come in peace.
I mean you no harm.
Nice to meet you.

Hi Alex, Hope you enjoy the site. Write what ever you feal like. I'm not much of a writer either but some how I wind up posting or at least reading and commenting everyday. you may want to pretend you are talking to the wall but write that stuff down then read overit to make sure that none of it is to private for the web, just a suggestion, enjoy!!

Hey Alex,
Welcome to the site, you should have said hello. Lilho said she saw you in the bathroom line.