Have you seen the new John McCain promo poster? 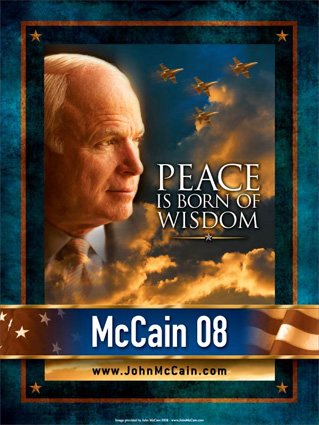 The lighting, that overly-poised face, the jets, the cheesy tag line. It reminds me of something. 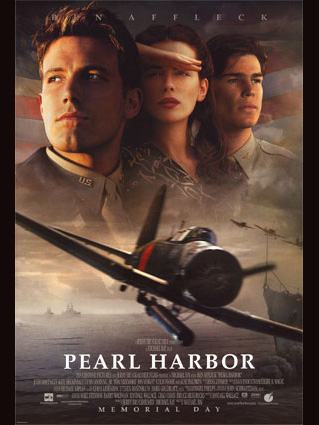 High above the jungles of Vietnam our two Americans bravely battle the Viet-Cong air force. John and Cindy keep trying to out do each other, shooting down enemy one for one. Then, a missile is launched at Cindy! She can't shake it, we see an explosion in the air, a big Michael Bay explosion. When the smoke and fire clears we see Cindy still flying. But, crashing towards the ground is John's plane. The hot shot John took the missile to save her. The drama!

(Three months later) A sinister looking Vietnamese man walks into a cell made of bamboo. John McCain is sitting there, bloodied but with the same confident look on his face, his hands tied behind a chair. "you will never get me to talk!" spits McCain. "We don't expect you to talk Mr.McCain. We expect you to scream". John breaks the man's neck with his legs. Then, a more officious looking vietcong walks in. "You may be commander of these people, but America is going to get you some day." Just then, the commander takes off a mask. He isn't Vietnamese. No, it is Osama Bin Laden!


It will be great.

It will bomb like most Michael Bay movies except for Transformers:Republicans in Disguise!

Joshua: Ya, that was pretty terrible. I sometimes wonder how things like that pass through so many people, each giving their approval.

Janelle: Yesterday was everyone's first day. By the end of the week they will be lean, mean canvassing machines! Thanks for breaking them gently.

James - A Sam Hoyt volunteer stopped by my house the other day. It was kind of funny. She asked if I was planning on voting for Sam Hoyt and she looked a little confused as to how to precede when I said maybe. She asked if I needed any information, I said no. And she still didn't seem sure what to do, so she left.

Poor thing. She seemed kind of young. I'm not sure I would have done any better, though. lol.

Personally I enjoyed Barack Obama's pseudo-Presidential seal that they were embarrassed into scrapping, and rightfully so. This picture of McCain is certainly over the top. I mean really - do we need the Navy jets in the background?

Oh the exotic places I have been.

Yesterday I had to go to the Greased Pole festival at the Olivencia center on Swan. It was so freakin crazy. For those not familiar with it, as I was, it goes like this: you take a telephone pole, staple a six pack to the top, and grease the whole thing. Next you have teams of people climb on top of each other in an attempt to reach the top and win prizes. The people though are only partially clothed. A pail of shorts and a shirt pulled over the neck with the arms still in, giving something to grab on to as the next guy climbs up.

A pile of greased up guys with no cloths on, and the homoeroticism is just getting started.

One grip is the shirt, but before that you pull on the shorts. Then you use the shorts as a foot hold. Add several tons of crisco and the shorts were just slipping off. There were so many asses it looked more like Marchelas.

The South Park team won easily. But saddest of the five teams was Rochester (when said in Spanish sounds like Rach-Chet-Tar). They came all the way to Buffalo to barely get two guys up. South Park needed six guys standing on top of each other's shoulders to win. Too bad RachChetTar. Come back again next year and give it your all.

the picture in my head is of how people staple flyers to telephone poles and how most are now so covered iwth staples, there is no actual wood left on the surface. And how this must feel scraped against the skin.

oh, I meant that as an expression of stupefaction that such an outlandish and totally fun game existed here. We have a "Desi"* version during the festival of Holi. A huge pole is set up and a clay pot with milk or water or some gooey sticky liquid is tied to the top - sort of like a piÃ±ata. Teams take turns at climbing the pole and whacking at the pot with a stick while they get pelted with water balloons, colour sprays, and other unimaginable coloured wild stuff. I am not sure what they win when they finally break the pot to make it worth all the pelting though. They get drenched with more ickiness. :)


adjectives. It could also mean idiosyncratically or characteristically Indian. If you said it, it would mean the same, but for the US.

It was the first public event I went to in Buffalo where police patted me down before I could go in.

What no pictures? I am sad to have missed it.

One of the great things about being the gay guy on the campaign is that everything gay gets put on my lap. And please, do take that sentence out of context. Today, I met with a bunch of members of the GLBT political community and talked about what we can do to get our guy elected. It was a lot of fun.

So today I arranged two fundraisers in Gay bars this August. It will be super fun. I am trying to get one to do an open bar. ANd open bar = crazy balls out fun. That is the sort of fun that politics often lacks. Oh sure, I got all happy looking at the new Nevada poll. But that is nothing like an open bar. When everything is finalized I will get you guys information and some passes if needed.

i like fund raisers at bars...particularly ones with open bars.....keep us updated

GOoooooodddd LUUUuuuuuucCckkkkk! I am sure you candidate is well on his/her way to victory! :)