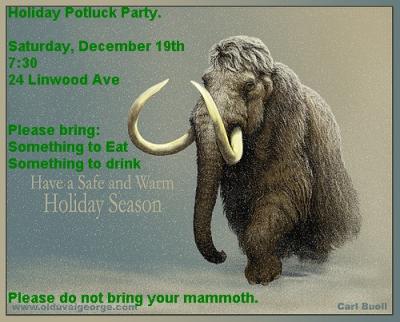 Thank you to Paul, Matthew, and Terry for being nice enough to host.

And thank you to you for being awesome.

Just Thought of something, noticed that it is a bring food and drink, so is it a dinner that then turns into a party after that or just a dinner. Reason I ask is cause I'm wondering if it would still be going on after the Sabres Game?

Looking forward to it... Are we organizing the potluck to create an actual full meal? I'm happy to make molasses crinkle cookies for (e:jim), or soup, or a veggie main course, or an appetizer...

I am planning to attend, however, because I MUST be in Bloss on Sunday, 12/20, if it's threatening snow, I'll have to leave sooner. Last year I got caught in that awful snowstorm right before xmas and missed out on my favorite annual event - judging the holiday lights contest: :::link:::

I checked the date and I will be at the Sabres/Penguins game so I can't make it. Hope someone brings their camera and takes Pictures. Well or multiple people could. Hope everyone has a great time.

That is so generous of you! :) I will badger you when the time comes - unless I change the plan. It has to be pumpkin themed - else those pumpkins would rot!

(e:tinypliny), I have a stock pot you can borrow.

I don't have anything that can safely hold 3/4th gallon of Hot soup...

Problem is I would have to steal a stock pot too...

Hmmm... thinking of stealing one of the pumpkins (smallest one?) on (e:PMT)'s porch and making a ultra-hot soup that would make people cry if they didn't want to. HEHEHEHE

I have to double check to make sure I have no tickets for any events that Night, but I think I should be able to make it. I don't really cook so I have to figure out what to bring.

Thanks for setting this up. Oh, and I don't mind if people want to bring their mammoths...as long as they aren't high heel wearing mammoth types.

We have had three elections this year:
School Board
Primary
General
And each time I asked you guys for a few votes. So, here are the two I am asking you guys to cast.

1) Captain John Glascott for Sheriff. John, undoubtedly, has the experience necessary to run Erie County. He has run prisons, and even began his career as a corrections officer. The incumbent, Sheriff Tim Howard, is incompetent. He is under several different investigations by state and federal agencies. There have been several escapes from prison in the last month alone. Remember, because Tim Howard can not run a prison, Bucky Philips escaped while unsupervised and killed an officer. Tim Howard refused to let a woman with unpaid parking tickets in the holding center get her cancer medication.

2) Mark Polancarz for Comptroller. Mark has done a brilliant job over the last few years as our Comptroller. While the County Executive is trying to bypass county charter to cut human services, Mark is keeping him accountable. His opponent argues that Mark can't count. That Mark predicted a $10 Million budget shortfall and we ended up with a $10 Million surplus. What a crock. Mark examined the budget, told everyone there would be a shortfall, and the budget was adjusted. That is doing your job and doing it well. The opponent is being funded by Chris Collins to be a rubber stamp. We need Mark to keep him accountable.

If any of you live where there is a County Leg race, don't vote for Michele Iannello. So there, you can't say I never supported a Republican.

Thanks for sharing your endorsements.

WFP has endorsed Poloncarz. And I think they have staid out of the Sheriff's race... which is odd as Glasscott is good on their issues.

Dig it, I wonder if they're on row E, the Working Families line.

When I read this I groaned, thinking I'd have to leave the apartment again just to please you but then I realized it's tomorrow! Ha!

Oh hellz yes. Next party, I need to work on you two. You need to become registered Democrats so you can vote in city elections.

Hey, as long as I am eligible this time! Haha.

Ug... Higgy. He does quite a bit of good, but he needs a tick in the pants some times.

But, let's not talk about Token's here. You should get out there and vote for Glascott and Poloncarz because they are dope shit, yo.

My token Democrat is Brian Higgins, and I kind of wish that I would have abstained at this point. Personally I think he treasures his Ways & Means Committee seat more than his soul.