Some kid was arrested for making this: 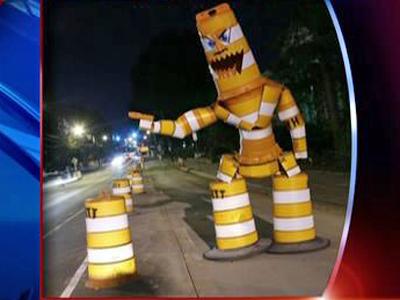 That is really awesome. I get why it concerns the police though.
1) Some construction area isn't marked correctly and that is a danger
2) The distraction of the monster itself is dangerous

That being said as long as the guy took one piece from each area as opposed to all the pieces from the same spot then nothing should happen to the guy.

that is amazingly awesome

That is awesome! It reminds me of when someone programmed one of those electronic construction signs on Main st. a few months ago to say "Zombies Ahead, Proceed with Caution". I tried to snap a picture but it came out crappy.

I can't wait to get it, my current phone's battery is starting to die the past month or so, only holds about a day's charge. Didn't want to pay for a new battery in the mean time so I'm glad they're releasing this in June.

I've been using the beta version of the iPhone 3.0 OS for a few months and it rocks, and as always Apple's API's are a joy to use. Since I use it for development I can write off most of the cost of the hardware ;) Now I just have to actually finish one of the my half finished iPhone apps...

I've heard from a couple people that it's kind of a boring incremental update, but since I have the original version of the iPhone, it's actually a fairly large step up for me. Mostly, due to the 3G network and 4x as much storage. 32gb, yum. Also, the new camera is a huge upgrade, w/ auto-focus and macro. Sick of blurry looking crap photos.

Yeah really. That's about the most retarded reason I've ever heard.

And I'm no computer guy, but- even if they DID have to go manually change a feature on every account, would that really take 2 months? Can't they write some little program that would do it in like 5 min?

And, if they have manually put all iphones on "no MMS" accounts- I wish they would bounce them back to the senders or something.

I mean I can handle not sending MMS myself, for now. But I hate that people send them to me, and they get no error or anything, but I have no clue they've send it, and then they're annoyed that I don't respond. At least bounce back "unable to send, this user cannot receive MMS" or something.

And while I'm griping about ATT- do you guys drop calls like ALL THE TIME? For a company whose ad campaign makes such a big deal about 'fewest dropped calls'- I had NEVER dropped a call before switching to ATT. Now it happens OFTEN. Now, I don't know if that's ATT or the iPhone, but I have my hunches.

Supposedly AT&T has manually flagged all iPhone accounts as not capable of receiving MMS messages, and has to manually unflag them all again, hence the delay until late summer.

Also in that report, tethering will bring the data cost of the plan to $70 from $60. Yeah right.

oh yeah and what about push notifications? they mentioned it, but I don't see it listed anywhere on the iphone site.

I was also hoping for a revamped notification manager. Like I only get a popup when I have texts, but not emails? etc.

and still no flash support in mobile safari, too, right?

Not to mention that f**king ATT isn't going to support MMS and tethering right away (see my journal). Blah.

I still want one.

But the 32gb will cost me not 299, but $699, until february when my contract is up. Oy. $400 change?! I can live without video until then. Esp since a lot of what I want (cut and paste, text forwarding, +/-MMS) will be available for free in the software update next week.)

Ya that is lame, but this is nice :::link::: I imagine my journal will be much more interesting with an app like that.

And still no file upload in mobile Safari.

The camera is a huge upgrade in that it does video and auto focus but I am really surprised they kept with 3 megapixels when all the high end phones are going 5+.

I definitely will consider getting one seeing as the price is reasonable. What I don't understand is the 7.2mbps HSPDA. Do we have that here? The whole time it is just the phone hardware holding back the speed?

Well, big news today: two Democratic NYS Senators have agreed to caucus with the Republicans, flipping control of the chamber.

I am disheartened this basically kills my chance of getting married in NY.

I was pleasantly surprised at some of the rule changes that were voted for after the coup (partial list):

- Committee Chairs and Rankers are term-limited to 8 years.

- Proxy voting in committee is eliminated.

- All agendas and voting records will be published on the Senate Website; all committee meetings recorded and webcast. A plan will be put forward by January 1, 2010 to create NY-SPAN statewide broadcast of legislative proceedings similar to C-SPAN for Congress.

- No bill may be introduced without a named Senate sponsor.

- A non-sponsor amendment if successful will retain its place on the calendar for three days and then shall be taken up by the body for final passage, not returned to committee. Messages of Necessity shall only be permitted in cases of actual emergencies.

- A new motion for consideration is created. A sponsor may move to have his or her bill included on the next active list if a majority of members present and voting agree to the motion.

- A petition for consideration is also created, which allows a majority of the members elected to request a bill be put to the floor. If successful, the bill shall be placed on the active list for the next session day. If within the last four days of session, it shall be immediately considered by the body if successful.

- All procedural votes require only a majority of members present and voting, rather than members elected.

- Debate may exceed 4 hours on budget bills, any bill considered pursuant to a message of necessity, or those which appropriate money.


Now granted, this is mostly all just so in 2010 when they end up back in the minority they're not locked out of power (demographic shifts virtually guarantee they'll be ousted again shortly). But still.

This also means that the Republicans will be mostly in charge of redistricting NYS Senate districts, which will keep them from losing as much ground in 2010 versus what the NYS Senate Dems would've drawn.

Ah -- one other new rule I just parsed the meaning of: 'Member items will be divided evenly.' -- essentially pork will be able to be given out by the minority and majority equally, so they can keep the folks back home happy.

Wasn't he supposed to be in Florida by now?

I may have a chance to permanently transfer to Boston, MA, for my company... it wouldn't happen for a few or six months.

Has anyone here lived in Boston? Should we stay or should we go? I know it's a very expensive city. Presuming I got a cost-of-living adjustment to Boston wages, is it a fun/cool city to actually live in?

Plus, (e:james) and I could get married there :)

my friend maureen lives in boston and i love it there! its a cool not too big not too little city i think!

Shit, Jim, sounds like a good opportunity. Everyone I've spoken with loves Boston. I certainly wouldn't hesitate, and the marriage thing is another great reason to go as well. Fuckin sad how you have to move away to enjoy full civil rights. 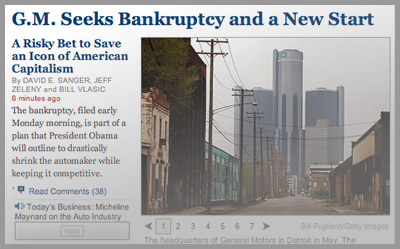 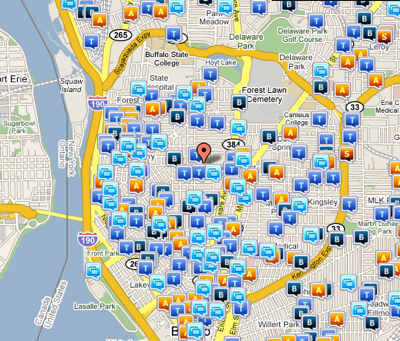 I just love these so much.

I just got to do a favor for Kent Beck (

), which for any normal non-geeky person would be like getting to do a favor for like, Jesus, or something. 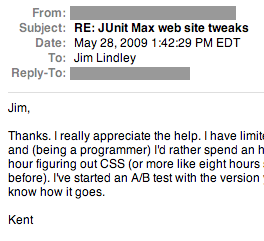 What doesn't buy you dinner, makes you hungry?

I was told by Jim this was better than a raise.

Money is good. But Jim's super geeky excitedness is good too... though it doesn't by me dinner.

heh. he has wikipedia entry. I say you and (e:james) are famous enough that you could start one for yourselves.

10 Things I Hate About Commandments

Principle Firebush is an awesome name.

Saw Must Love Jaws too... Ridiculous as fuck. :p 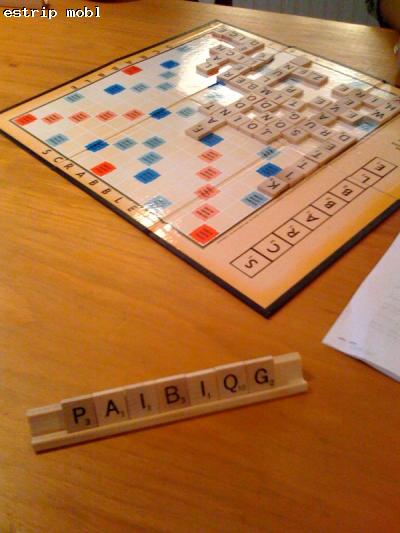 I'm sensing two distinct themes here ... you got FANDOM, LICH, and DICE on the one hand, and DRUG, JOINT, LACED, and BLUN* on the other hand ...