To those helping me out, and to Paul. I have to start getting ready to present at my conference, so I can't finish anything more this week. I get back Monday though and my slate will be clear. For everyone else, sorry for all my boring posts about this stuff. I promise in the future, I'll blog about my dog instead.

Sorry for the delay. I wanted to get more done this week.

What conference are you going to?

(E:James) and I went to go pick up the rings we had made (tomorrow is our Anniversary) but the jeweler had made them out of yellow gold instead of white.

I almost didn't notice they were wrong ... the rings turned out really well, just ultra plain bands. I thought maybe they were just colored by the lighting in the store. Offhandedly at the end, I asked,"Isn't this a bit yellow for white gold?". So, no rings. It'll be on my finger for the next million years, so what if it's a day or two late? I'm trying to be philosophical about it.

yeah, happy anniversary! And I'd say it's worth waiting to get the rings the way you want them. Like you said, what's a few days compared to the years and years you'd be wearing the wrong one... The jeweler actually put the wrong diamond in my mom's ring, and she thought about not complaining, but in the end was glad she got the right one.

Who wants to volunteer to proof read documentation this weekend?

I'll have a bunch of stuff to review by Friday. It's super fun! You know you want to sign up... leave a comment here if you're down with the English language.

Actually it's my anniversary tomorrow, so I might be running a couple days behind.

don't know how much time I'll have, but I am a massive grammar nazi, so proofreading is one thing I'm usually pretty good at. So go ahead and send me the file/link/whatever, and I'll do what I can. (just don't be too mad if I run out time and don't get much done!)

Ok, like 20 people said they were coming, but only 8 showed up. Probably typical for this kind of thing. We had lot fun.

I'll post again when the next when will be in February.

If this is what we get, I think we should all go out and rip the mufflers off our cars. And burn down all the trees in our yards.

it was also a full moon! No wonder it was all crazy... and campers were killed at lake crystel

Here are my 2006 New Years Resolutions

2. Sit ups and crunches every other day.

3. Only one cup of caffeinated tea in the morning. Decaf the rest of the day.

Things are moving along. We've mostly got an outline of what to cover.

And let me know if I'm missing anything. You don't have to write anything, just point me in the right direction if I've gone astray. I'm not too worried about writing every little step down, but if you see a feature or big thing that I missed please let me know.

For a more involved role, please email me at

And I'll add you to the documentation program.

Thanks for the help so far Uncut and Paul

Feel free to log in and check it out. The password is 'estrip'. Without the quotes of course. I've set up an outline of what I think needs to be in it, but of course it's bound to be missing some stuff.

I'll work on this some more tonight, but I wanted to start the ball rolling. I will be taking screen captures to illustrate the various functions. Mainly what I need is to be sure that I've got everything I need to document listed on the outline.

One: Add to the outline itself, or add a comment at the bottom. You can also leave a comment for me here. Do keep in mind, it is just an outline so far. So don't be too harsh on me for the sparse page. Remember it is just an outline, so no need to get too detailed. Think more along the lines of 'What can be done?' and not 'How do I do it?'

Email me at
web ~at~ jimlindley.com
And I'll add you to the list to access the ongoing documentation effort.

UCSF, if you want to email me I'll set you up a basecamp account so you can stay involved.

Thanks... now that I've got an outline it doesn't seem too daunting of a task. I think I'll start on the screen shots tonight.

Also, a screen cast might be nice too. I'll have to try to remember which is a good program for that.

its a very good outline. time and tide (i.e., my lazy nature) premitting, i'll help flesh it out.

Never Speak of it Again.

Please for the love of God, never say:

When you should say:

PLEASE FOR THE LOVE OF GOD

If I catch anyone around here saying it, you will be first against the wall.

Seriously, and just to reinforce: of the pages that contain this phrase, 9000 pages spell what's as whats, and only 400 spell it as what's. Don't make me hurt you. I'm itching... it seems suddenly there aren't enough dead trendy people in the world.

I blame Rupert Murdoch of News Corp. Think about it. That man owns the two worst cesspools on the planet: Bill O'Reilly and MySpace. I would say it's hurting the children, but to be honest I don't care about children. It is hurting me, though. That I'm sure of, and I'm offering up the proof on this very page.

What kind of world am I living in that I am forced to deal with this? I think this proves that I'm not solipsistic, because were that the case I would make these facts flee from my mind in terror, instead of the reverse.

(Paul has informed me that I am exempt from the site Terms of Services and can threaten any and all with death. FYI.)

This is my enforcer. 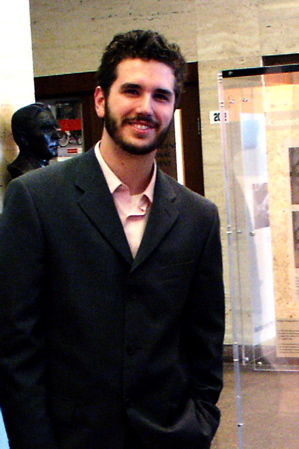 This is the man who will show up at your door if you displease me. His name is Mike... and sure, he looks friendly, but it's a clever ruse. He knows karate and is not afraid to use it, so mind your 'what's' and 'happenings'.

I pledge my alliegence to the White Hand of SauruJim that I will slay anyone who uses such a phrase in a genuine or ironic sense and throw their bodies to the whales!

How awful! I have never heard of this; somehow I am thinking that I am not missing much. Please let it dissolve from my memory..bad bad bad.