I'm sure that title is misspelled but anyway HAPPY BIRTHDAY MIKE!!. Sorry its a little late but I still don't have a computer (I'm using a friends). Expect a present in the mail but not too soon I have so many still to send other people too! tty soon!

No, not that crappy Disney movie about the pets on the farm or whatever but me being ready to spend another fabulous summer in Buffalo! I can't wait to go home and watch shakespare in the park with the coolest kids in town, and have ice cream by the river (ps who wants cheesey bread at Tully's right now?), seeing movies and talking though the corney parts... etc.

I have a week and a half left at my miserable job and I could not be happier about that! I make more at my craptacular job than my sister who is a vet tech in Buffalo but money can certainly not buy happiness. Unless it is in obscene ammounts that would allow me to buy Orlando Bloom for a week, or rig the Vibe awards to start a hip hop war. But lets face it that kind of money is only made through birth, ill buisiness gains, or marrying a 90 year old oil tycoon like Anna Nicole Smith. But sadly even she lost her millions. Needless to say I will only miss the money but it wasn't worth the frustration. I wonder if I will ever find a respectable, good paying job that won't make me want to put a gun to my head at the end of the day. Speaking of which I am currently looking for a summer job so if you hear anything let me know. I sent out a bunch of resumes already so hopefully something will come of those. Matt has been putting in resumes for architecture internships in Buffalo left and right but none of the firms seem to be taking interns. Its sad because the kid already second guesses his talent and then to be continually rejected makes it harder. I keep trying to explain the differences of places not wanting interns and real rejection of people wanting interns but not chosing him. He seems to think they are the same but to the outside person it is easy to see it has nothing to do with talent just supply and demand.

We are subletting a place off of main street for the summer right across the street from UB. It is the apartment of a kid we both went to school with at Morrisville who now goes to UB but will be at home in Rochester for the summer. he was supposed to pay off the end of someone elses lease so he and his friend could have the place for the next school year. Matt told him we would pay half of the lease for the remaining 4 months to stay there while they were home for summer. So we are getting a big 2 bedroom apartment for like 350 a month utilities and cable included. After spending the last week in Boston looking at places for next year that are half the size of my bedroom for $975 a month without utilities this seemed too good to be true. It will be interesting to live in Buffalo without my parents hassling me every day. So if anyone needs a place to lay low from their parents this summer- we have an extra bedroom. As I recall Jesse had to sleep on a couch at his new house so Jesse you are more than welcome to come stay at the apartment and have your own room no charge. That offer is up for MK or Mike or whoever will be home from the crew this summer.

Speaking of being home for the summer who else will be? I know Matt and I will be home, last I talked to Mike and MK they were going to be home. I heard that Jill and Teres were going to europe and Jen would be in KY with Glenn. Will Jesse and Maureen be home? What about Yo, will she be gone for mass periods of time? I would like a summer pre-cap and I expect Mike to be the one who will know so I will look forward to seing that in his and all of your entries. Well I must go, my paper on the Sexual Roles in Gone With the Wind will not write itself.... unless I feel like paying $39.95 for it online...

hey guys, I don't have all of my Disney World pictures on my computer yet but here is one that I thought was incredibly goofy and fun that I hope you enjoy of me and Matt with winnie the pooh 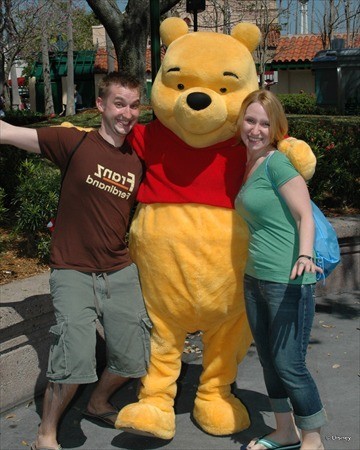 I can't wait to show you all the rest, I used like 4 rolls of film and matt used a memory stick of like 140 pics on his digital. Of course most of them were from the fist few days when we were in awe of everything so it looks like we wore the same clothes all week. Mike I owe you a postcard, I found it in my suitcase when i realized I had not mailed it, it will be there soon. MK your present should be arriving at your house soon because I don't have your apartment address. Jill I think I am going to have to ask you about your present, hopefully I will see you online sometime this week so I can get that sent to you asap. I know jen also has a b-day coming up, I perused some john lennon stuff at the UK pavillion at epcot but decided she probably had 90% of that stuff anyway. I think I have a few ideas for her though...does she even read e-strip now that I think about it? Okay well back to work, more on the incredible time we had at Disney later.

My new user pic is of my darling little Amber, who won a cat of the day award in May for this picture....

My goal for the summer is to subrent/sublet or even apartment sit in Buffalo. I need to come home for a few months and de-city-fy myself while not living with my parents. I can't stand my job any longer and I am home/kitty sick. I know this is probably my last summer of freedom before I have to settle down and keep a real job and apartment so that I am not homeless, therefore I know that I must take advantage of this fact by quitting the job I hate and living on my own but yet still being in Buffalo. I have enough saved up to rent/sublet an apartment in Buffalo for the summer May-sept and just need a place to do so. If anyone knows anyone that will not be staying in their apartment for the summer months, ask them if they would mind if a very clean, non smoking or drinking 20 something pays them to live there in their absence. I have a few offers but nothing I am jumping up and down over, so if you know someone please let me know. Also if you know anyone hiring for the summer I could use a job during that time as well, I have great credentials. I have enough saved to not work, but it will be easier for me in the long run to work over summer even though I know just how hard finding a summer job in Buffalo really is.
I missed MK's recital yesterday *sniff* but I hope she got my message of good luck that I left on her phone. I haven't heard about it yet but I am sure she was amazing. I really wish I could have been there. I also heard that Jen and her mom are having a joint grad party which sounds like mucho fun. Jen and her mom throw great parties... martimis aside. I have been incredibly kitty sick this week. I miss my brother and my kitties and my friends so much. Maybe its because I usually go home for all my breaks so I never really go away for more than 2 months without coming back for a hit of home but now I know I won't be home until May because of Disney. Must not think about it now or I will get teary, sad how you never know what you have till you can't have it.
Matt and I leave for Disney late Tuesday night, technically early wed morning. We are super excited. Yesterday I went out and spent a cool hundred dollars on summer clothes to wear. That in its self was exciting, shopping is so fun, I am so glad I have a boyfriend who loves to shop too it makes it so much easier and more fun. We went to the mall in cambridge, and down newbury streetand around copley square, it was the first time all year I havent worked on saturday and it was a beautiful day. Today, I am alone at work and it is horribly ugly, I think we are supposed to get another few feet of snow which makes me so excited to get out of here for a while and work on being tan and warm. I wish everyone was coming with us, it would be really cool to meet up with all of my favorite people in a tropical location. We must do the cruise next year guys, it will be a memory to last a lifetime.
Okay must get back to work/ studying for midterms, my love to everyone in Buffalo, I miss you tons!