On days like today, fortune favors those who stay in bed.

There is a small group of Latvians who are visiting Buffalo. On Monday, my aunt was driving them through the Finger Lakes, doing some wining, with the ultimate destination of New York City where my cousin could help with the touristing.

But they got T-boned coming out of a winery, sending my aunt to the hospital and totalling the car. [This makes my own story small in comparison.] My mom eventually brought the rest of them back to Buffalo to regroup.

So they decided to put them on a train instead. This morning, when I was the only one available to take them. No problem. My mom says their train leaves at 8:40. I remember: their train leaves at _:40. Before bed, I check the schedule for the Empire Line, which says 7:36. I groan and set my alarm.

But we can't take my car, because it's too small. We switched cars last night so my mom could take mine to work in South Buffalo, and I can take mom's to the train station. Once I've dropped everyone off, I'm to drive to the school where she works, and switch cars so she can drive hers to have it serviced after work.

So. See if you can spot all seven ways in which this can go wrong. I already gave you a freebie. Consider this your spoiler alert.

1. I show up promptly at 6:45 and the whole house is dark. I rang the doorbell a couple times before someone staggered to the door half-asleep and asked me in Latvian what my deal was. I eventually determine that Mom had put them on the Lake Shore Limited, which an Amtrak employee once informed me was referred to by employees as the Late For Sure Limited, which is scheduled [heh] to leave at 8:40, not 7:36.

2. Sitting at the intersection of Englewood and Kenmore, I look at Kenmore, then I look at Englewood, and I think, why not just take Main to the Scajaquada instead of backtracking to Parkside? Maybe because they've closed off half of Main Street to install stupid medians. During rush hour. It was supposed to take 20min to get to the train station; it took 20min just to get to the Scajaquada.

3. We arrive promptly around 8:30 - more than ten minutes to spare. Get up to the counter, get everybody's IDs sorted out [thank God] and get the tickets. By the time everybody's done signing their tickets, the train pulls up. The Late For Sure, which was six hours late the last [only] time I took it, was eight minutes early. Everybody got on the train ok.

4. Driving down Abbott, which is not my neighborhood, I overshot the school by about 600 house numbers...

5. when I realized I'd left my own keys at home. Turned around, went back to the school, got buzzed through, found my mom, and

6. she can't remember where she put the key we'd given her. She was going to leave them in the car, but didn't want to because the windows wouldn't go up [apparently the child window lock also applies to the driver, who is ... also a child?] but doesn't know whether they're in her purse or wallet or desk or if she stashed them in the car anyway.

[At this point, a child came up sniffling to my mom that he was having the worst day probably ever [it was only 9:30]. For some reason this made me feel better.]

So I have to go all the way back home. Along the way,

7a. I cut somebody off [because I'm still driving mom's land yacht],
7b. almost get T-boned by another person, and
7c. watch as somebody else almost gets T-boned. Needless to say, I am hypersensitive to the T-bone.

This was the point when I understood that the cosmos was sending me increasingly less ambiguous memos regarding my placement on the org chart of the universe. [Answer: it's better to be at the bottom than to not be on it at all.] This was also the point at which I bought a toasted Everything Bagel Jaygel and a French Roast with heavy cream, did not get food poisoning, and did not get a pink slip from Upper Management. I went back and picked up my car without incident and things are going OK so far, but I've still got to make it through another ten hours before it's tomorrow.

Pardon me, but this story made me chuckle uncontrollably. I had to confess just in case you expected some other reaction - in which case accept my totally insincere apologies.

That is Crazy. If it was me the message I would have got with all the T-boning and almost T Boning is that I'm not eating enough T Bone steaks but that is just me.

(e:dragonlady7) has finally read everything there is to read on the Internet and has started over from the beginning.

So I have a distant n'th-cousin from Latvia visiting my aunt. She asked if we could take him out to do "young person things" [I'm pushing 30 and I'm the youngest person in my family who still lives in Buffalo, so I guess it counts] on the 11th or 12th. I'm like: no problem. And she's like: he's 20.

GRAHH why is it that my idea of a good time always involves beer, or at least, a place where you have to show proof of age? And there's no f*ing way we're taking a Latvian to Canada on Amateur Night* - I don't know whether it would be worse to get buttraped by the border guards, or have to spend an evening in a bar full of drunk 19-to-20-year-old Americans.**

Help me out here people. I mean seriously my idea of crazy times is going to the Century on Free Bacon Night, getting some wings and a burger and several [ok three] beers, and making fun of mixed martial arts for a couple hours.

If you find yourself hungry in Rochester, seek out dogTown gourmet hot dogs & garbage plates

[also, oddly enough, very vegetarian-friendly]. Never before have I had a hot dog served on hand-cut French bread or, for that matter, a hot dog garnished with a reuben [genius].

It's conveniently located right off 490 and well worth the detour if you're just passing through.

We'll be there within a couple of hours....

I sicced my friend onto this today and she is going on Thursday! :)

Finally, a celebration of the dog's diversity. woof!

So What Vulcan is that?

It's a True Fact that before 2011 we'll each be called before a Nazi Death Panel. This is a democratic country but the legislation is shaping up fast, so now is the time to weigh in: who first? I'll compile our answers and send them to our representatives.

I'll start us off: I think the first people they should kill is the kind of person who offer unsolicited opinions on groups of people to kill. You know the kind- they start a conversation with 'When I take over the world, first thing I'll do is kill all the--' These people are always insufferably boring, and a world full of them is not worth living in. Now I hear you saying: 'Didn't you just offer an unsolicited opinion on groups of people to kill?' To which I say: 'I'm a patriot, baby. You're welcome.'

Second group: anyone with a rubber scrotum on their car.

Nicolas Cage: is he reallly a bad actor? Or is he a so-so actor who gets cast in a whole lot of really dumb movies?

Exhibit A: Face/Off, which is a really dumb movie wherein Nicolas Cage plays John Travolta and John Travolta plays Nicolas Cage,* allows us to measure his performance directly against a known-terrible control.

Face Off was a great Movie, what are you talking about? That being said I haven't seen him in a movie in a long time. I like him because he brings that odd ball sense to a movie, I love that one I forget the name of it when he is at Alcatraz.

You Can't blame that on the actors only though. Most movies have actors play themsleves playing a character. Yes there are some exceptions but that is pretty much true most of the time.

Get ready for the sequel "I've Gotta Hand It To You"

I like Cage. I think he's accepted some really terrible scripts in recent years though.
And Face/Off is one of my favorite movies!

sex in an mri

More likely than not, you didn't really want to know. Click 'play' and get what you deserve:

Don't mind me, I'm just going to go over here and be a nun now.

Ben Goldacre's blog, Bad Science, is filled with stuff that is so less arousing, but the science is ten times as bad. :::link:::

we drank alone [with nobody else]

. Oddly enough, I probably had the most actual pirate cred among the group, having been running rum across the border the same day that I arrived

Some poor fucker brought a handle of Old Grand-Dad to the camp which we had to dispose of. It's a testament to the perseverance of the human spirit that the bottle was already half-empty when I got there one week into the event, but with one day left before packing up, we needed to figure something out. Enter (e:dragonlady7) and the #1 invention of the year: The Old Granddadtini*. Using several cans of Dr Pepper, a few bottles of sparkling cider, a fair amount of sour mix, and a smattering of triple sec, brandy, Mountain Dew, and anything else we needed to get rid of, she bent the laws of space-time physics to make Old Grand-Dad palatable --nay, delicious-- to enough people that we finished the bottle in only a couple of hours. The bartender was offering free upgrades to the Ballsacktini, which someone jokingly ordered and inadvertently received. Upon finding out, he drank the whole thing out of spite.

Another night, one of the tiki torches we used to light the road got busted and, with the help of a rubber band and a bottle of Stella, turned into Best Invention #2, the Beeki Torch. It earns points for majestic splendor, but loses points for practicality.

Deciding that there were too many Daves in camp [two], we founded the House of Daves. Our coat of arms [still under development] is Dave rampant sinister, Dave drinking dexter, beeki torches supporting. We have no constitution, but we have a number of amendments that start at number three because one and two seemed too important to use right away. I guess it doesn't matter because I can't remember them anyway. We also have the House of Daves Ladies Auxiliary which historically predates the House of Daves itself. And, using the closest item available [a monk-shaped dildo], we dubbed a knight John Henry David of the House of Daves based on his outstanding service to the Ladies Auxiliary [back massages].

Thus was a good time had by all. I'm glad I have the weekend to recuperate.

House of Daves would be so much better than House of Cosbys.

You Linux guys got a real sense of humor. 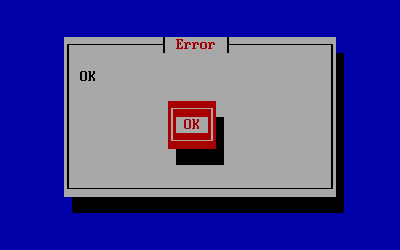 And yes, this goes into an infinite loop.

That is some U.G.L.Y bit of colour.