This is my second start on this chart. I had designed it for 18ct natural but I was feeling a little stressed out a couple months ago and I needed something to fidget with and all I had in 18ct was white.. I finally got some natural cloth yesterday and I think it's turning out much better. 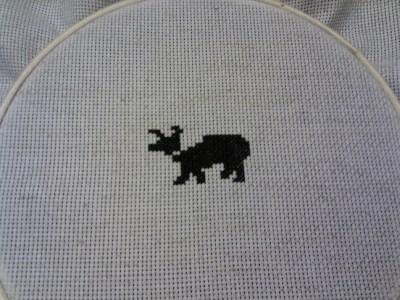 I'm sure this is all very boring but if I don't post status updates I'm probably never going to finish it. On the other hand, if I keep posting status updates it'll totally blow the joke before I'm anywhere near done.

I have a recurring motif in my dreams that I have a loose tooth. It sorta hurts a little bit, and it sorta doesn't line up quite right when I close my mouth, and I'm trying not to lose it while important other things are happening in the rest of my dream. It really freaked me out at first but it became so common that I eventually started ignoring it. But last night I had a dream where they were actually coming out, one by one. After I had lost two I did a thing where I convinced myself I wasn't dreaming. [I don't remember what that thing was, evidently it wasn't very reliable. I probably just asked somebody.] It wasn't until after I'd lost four teeth before I thought maybe I should go see the dentist. When I'd lost six teeth I started thinking what the hell is going on here? and the best thing I could come up with was a gnome in my mouth chiseling them out from the inside. That was too ridiculous for even me to believe so I woke up.

That is my only re-occurring dream and by far the most realistic. Hasn't happened in a while, thankfully.

I think losing teeth is a really common theme in dreams. If you google it, you'll find all sorts of meanings. Either fear of losing control or fear of getting older being at the top of the list. I think. I forget. I looked it up a while ago. I have dreams that my teeth don't line up sometimes- and I think it usually means I'm grinding them.

That animal has a hyperextensible neck?

My nightmares always have this background of plumbing problems in my flat. Something or the other starts to leak, get mouldy, fall apart etc. It is extremely real and annnoys the hell out of me because my management always "does something" to fix it but everything stays leaky.

(e:terry) has dreams about that a lot.

for making my life just a little bit weirder. This is the endorsement on the back of my tax check:

In other news, I wholeheartedly support the Paladino campaign, if only for its entertainment* value.

or Palamino for Gov

In this case "without prejudice" means the state does not admit that your taxes are paid in full by accepting payment. It reserves the right to levy additional charges if it deems it necessary.

I just started doing my taxes, and I just want to say that Form 1040 Schedule SE ["Self-Employment Tax"] is total bullshit. It raised my taxes from $2000, which is reasonable I guess, to $6000, which sucks balls. Don't bother giving me helpful tips for next year, I'm not doing it anymore or ever again. Buy me a drink & I'll tell you how I really feel.

+1 for Orchid Asian Bistro (e:leetee,51352) we went for a sushi lunch this afternoon and gave it a shot. Their spicy tuna rolls are among the best I've had.

Apple/Adobe is a soap opera and I'm trying not to care. Fact is, this isn't the first time I've switched from Mac. Some time after System 8 I got tired of waiting for preemptive multitasking and switched to BeOS R4* which I used until it was basically discontinued. Then I switched to Linux [Yellow Dog?] until Mac OS X v10.1 came out. I don't think I have enough pull with the teeming masses to start an exodus, though, and if I did I like to think I'd make them do something more fun than switching operating systems. Human pyramid, maybe.

(e:tinypliny) - It looks like some guy is already making builds of Chrome OS

from the "Chromium OS" developer project. I have a spare USB drive so I might give that a shot, but I think I'm probably going to stick with Linux in the end.

You can also install Ubuntu and probably other Linuxes [Linuces?] onto a USB flash drive to test it out without taking the plunge. [You can run Ubuntu right off a CD but it's mad slow.]

The human pyramid has been done before - but you might just win the peace prize for the OS switch. Think about how many person-hours it might save in endless helpdesk/technical phone-line queries and troubleshooting and agony and frustration and whatnots.

I've probably had about 75,000 calories today and I haven't even had dinner yet. (e:dragonlady7)'s coworker Strongly Suggested that we stop by Paula's Donuts on the way in to work today, so we bought a dozen each for our respective people. The glazed twisty-stick was decadent; the "strawberry shortcake" - a quarter-poundish jelly doughnut with twinkie-like filling - was obscene [and I have it on good authority that the lemon jelly donuts were heavenly]. For lunch the company sprung for chicken finger pizza, which is pretty good if you don't think about it too much. But if you do think about it too much, fried chicken in a butter-sodium sauce atop mozzarella covering a layer of bleu cheese dressing tends to sit a little heavy.

I've installed Ubuntu 9.10 on a trial basis to decide whether I can use it full-time at home [or, I suppose, work]. If it works out ok I'll do a real install when Ubuntu 10.4 comes out in a few weeks. I've been using Mac OS X since before they named them after cats and it's a little boring. Also it seems that Apple has decided to start beef with Every Company which does not bode well, so I'll wait this one out until Steve's man-period blows over.

Ubuntu is very brown, but aside from that it's pretty good for a product whose logo is a hippie drum circle. Seems to me I had more driver issues with Windows 7 on my MacBook than with Ubuntu [none yet? knock on wood].

It's so not fair that you peeps understand when I am talking technical but the reverse doesn't work...

Yeah, selling Creative Suite to Mac users is probably to big a slice of revenue to cut off. Plus if they cut Mac users off for software like you're talking about, they'd be doing what Apple did to them, and they would lose the moral high ground. Adobe wants to increase penetration and make Flash a suitable cross-platform tool for mobile development. Dropping to the cut & kill level would just fracture their reach more.

I am 100% fine with not allowing a flash plugin in mobile Safari, I think it'll speed up HTML5/Canvas/WebSocket/etc adoption and that's the real future of the Web. And I despise Flash-only or Flash-mostly web sites.

I am very unhappy with Apple about not allowing 3rd party tooling on top of the public API (the latest SDK dev agreement changes).

I know it's all about money but I keep wondering why adobe doesn't pull the final fuck you on apple and just remove the mac version of creative suite. I bet have the people that own macs would not if there was no Photoshop.

This is so exciting, I sense a mac exodus. I started with system 7 riding through each iteration till now and I just started to totally lose interest because of mac politics and because of the fact I fear there computer OS will soon be the attacked by hackers as popularity soars and because I think it will sit on the backburner in favor of iPhone ipad os. Those OSes are too appliance style for me.

I am so sick of windoze and I am a wimp - which makes me gutless and unwilling to experiment with ubuntu. 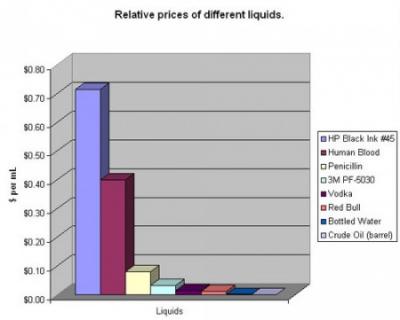 Inkjet ink costs less than twice as much as human blood. What a steal!

What can you do with one cartridge worth of ink? Dying of suspense? Find out here:
:::link:::

That's not a feasible idea unless you heparinize the blood or coat your printer with EDTA.

it's not weird it's METAL

So what you are saying that we should all get printers that use human blood.

Pro's:
-- A pint of blood is a lot of ink
-- Anyone in the family could contribute on a rotating schedule
-- It is a renewable resource
-- There would be zero waste

Dang man. I did not know that. 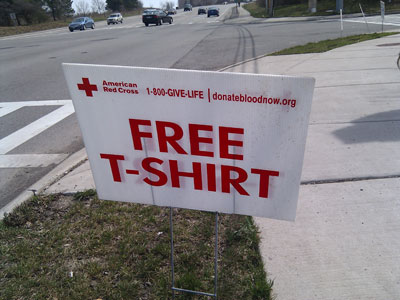 If you think a free t-shirt is appropriate compensation in exchange for a pint of blood, you might oughta reexamine your priorities. The crackers alone should be enough.

yeah, it's stupid. I mean yes, I understand wanting to screen out people at high risk for HIV. But just because someone is gay doesn't mean s/he has AIDS. ugh.

At first I thought you all were joking about the whole them not wanting gay blood thing.

"Between 10,000 and 15,000 of the 25,000 Americans with severe hemophilia -- a hereditary disorder that disrupts blood clotting and often requires large-scale transfusions -- are believed to have been infected with HIV via tainted blood products in the late 1970s and early 1980s, said James Curran, who at the time headed the first AIDS task force at the Centers for Disease Control and Prevention."

"Because blood drives are frequently held in schools and businesses, the donation policy can stigmatize gay men by preventing them from participating in an activity often used to build camaraderie and teamwork, said Sean Cahill, a managing director at the Gay Men's Health Crisis of New York.

The current ban "promotes the idea that gay men are a health threat," Cahill said."

They refused me because I didn't have much time, and couldn't wait in the whole line. I mean, I guess it's obnoxious to ask to cut to the front of the line- but if they're really as desperate for donors as they always act, you'd think they wouldn't turn away willing people. ah well.

They give you Naked(TM) juice now when you donate at Roswell. (Or did, last year). I tried pretty hard to get in because my priorities are in the right place, of course and who in their right minds says no to Naked(TM) juice, right? But they point blank refused me because I didn't meet their weight criteria. :/