may you code in interesting times

best known for his work on a highly regarded local website

- 'due to creative differences we have decided to part ways, and I wonder if we could be of service to your company in the future.'

Naturally I was dying of curiosity as to what constitutes creative differences these days. Answer: Zack believes 'content is king'

while George is enamored with bells and whistles

. Whereas the visual signal-to-noise ratio of their current site is about 60:40, the SNR of their new site [due out by the end of the year] bottoms out at around 35:65 - and that is past a critical threshold. With our better content and his better site, he believes we can rule the universe. I tend to agree.

Of course, their timing couldn't be better - we've been focusing strongly on our website lately, and we have a number of huge changes planned. Thus far, my greatest concern is one of staffing. I am the web department, and thus far any requests for more staff have been met with suggestions to hire part-time unpaid interns. This is where it gets funny: while I don't think I'll ever get actual funding for the actual website, I will bet that we can get as much funding as we need to drive certain people

crazy. And if the most efficient way of getting things done right is to play personalities off each other, well - I'm not above doing that.

We shall see. We code in interesting times.

interesting indeed. I'm not a fan of bogging down load times with fancy gimmics, bells and whistles are ok, but just having the site look cool at the expense of the visitor and the information is not good.

I'm all about local media, and I hope we get more of it since publishing on the internet is cheaper than paper. poor WNYmedia.net got left on the dust when Brising came out. and i definitely dig the artvoice redesign, easy to use and find content. Happy trails

OK so before I worked at a juice factory I got an EE degree.

You could not use that shit in radar applications

It look so bad when people leave error reporting on, on a production server.

somewhat out of control

My family does two Christmas gift exchanges every year: one within our immediate family where everyone gives something to everyone, and one secret santa thing with my aunt's family. There is a bit of a twist to the secret santa exchange in that we also do a creative gift-wrap competition.

OK, you think, sounds (fun|lame), whatever. But you need to understand that my family is both extremely creative and extremely competitive. Entries include a 2' diameter replica of an Oreo [with the correct number of serrations], a large toucan in a cage on a stand, a foam-core laptop computer with functional cd-eject mechanism, and a replica of a meat counter at the Broadway Market -- and none of these were winners. Eventually we felt it wasn't challenging enough, so we began restricting entries to a theme - in 2004 it was "Broadway" [most entries were related to various Broadway shows, but there was also a replica of an N-R subway car as well as aforementioned meat market], and last year it was "The Pantry" [somewhat disastrous, as many people leaned on the pan-tree pun]. Dammit, (e:dragonlady7) - I thought you had photos of this stuff online.

This is the competition's ninth consecutive year running, and it was decided once again to make it more difficult. Since our festivities are being held in San Diego this year and TSA does not take kindly to unusually-disguised secrets, we will be bringing our gifts unwrapped [or having them shipped] and assembling our wrapping, Iron Chef style, in two hours on Dec 28, with only certain provided elements. The theme is "Fun & Games," but the competition will be nothing short of Intense.

And, lest you think I'm joking around, I just got finished putting the finishing touches on this year's revision of the SQL-backed gift registry web application that we use. Yes, it is strictly necessary. [We had done it by hand before, but we had to wait until everyone's list was in before we could send them out, and we ended up having to make two separate gift lists, one for each exchange.]

that sounds insanely awesome! I wish my family did that!

sucker and the pescado non grata

Hope everyone had an excellent Thanksgiving. I was going to upload Arlo Guthrie's "Alice's Restaurant Massacree," but even if I could get it to fit in 5MB it would sound like an AM station through a shower radio. On fire.

On Monday, my coworker said hey, does anyone have a fish tank? I said yeah, and she said do you want a couple fish? Just a goldfish and a catfish, not too big. They need to get off the dining room table before Thanksgiving. Sure, why not? We dubbed them the Pescado Non Grata.

I got them home yesterday, and the goldfish is as pretty as a koi but has the manners and more importantly, the size and appetite of a carp. Truly, honestly ... I have eaten fish smaller than this goldfish.

The plecostamus catfish, however, is awesome. He's kind of cute, and totally antisocial. He can swim pretty good, but mostly he just schlorps around the tank with his lips. I'll get a picture of him up soon, but here's one I found on the Internet of a similar pleco totally chowing on a vacation food brick. I guess they really like zucchini as well. 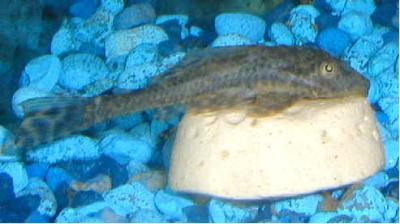 I think this should be our new marketing campaign: 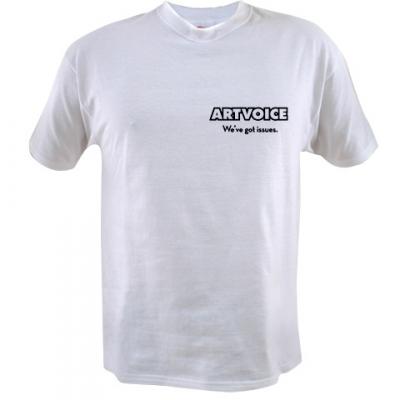 Very succinct, and it sure beats all these pretentious 'The Art Of Thinking' and 'Welcome to the 21st Century' bumper stickers we've got slapped on every available surface around here.

That is a good idea. For some reason I think I have seen it before. Just to let you know the band Korn (backwards r) had a CD called Issues and they used the question Got Issues?

LOL... head to CafePress and get them made!

...but I wanted to see what it would look like if I put our entire bar/business/gallery/restaurant directory on one map. Answer: really crowded.

If anybody can think of any real use for it, I'll fix it up real nice and officially put it on the site; otherwise, I'll just leave it around as a curiosity.

Also, you can get notified of our events by RSS now; there are feeds for each calendar, category, and venue in the database.

I think this would be an excellent application for the wireless web, but sad to say, I've got other stuff that needs to get done first.

It's about damned time the city of Buffalo had some XML functionality to it.

Dammit! I had my meth lab all set up in my basement and ready to go - until I got to the drug store and found out I had to ask the pharmacist for a 24-pack of Sudafed. Damn, damn, damn! Curse my bashfulness! Now that I can't corrupt the youth of America I guess I'll have no choice but to spend my spare time helping old ladies cross the street.

And I would have gotten away with it, too, if it weren't for you meddling legislators.

The ironic thing is I don't even like pseudoephedrine. It works miracles on my sinuses, but it makes me feel all spacy, and it's really expensive. I ended up buying the phenylephrine instead in the hopes that it has fewer side effects.

What I object to more than the supposition that I'm some kind of crank dealer, is the assertion that limiting retail purchases of nasal decongestant is going to have any sort of noticeable impact on wholesale meth manufacture. If it works at all, it will only serve to help eliminate mom & pop meth labs and strengthen the market position of the large-scale manufacturers, who most assuredly do not buy 24-packs of Sudafed.

It is also troubling that it took a large-scale media scare before there was any real research into less freaky nasal decongestants. [see also Tamiflu :::link::: ]

OTC Sudafed seems a little silly, although anybody that is buying a massive quantity of the stuff isn't buying it because they are feeling stuffy.

Jay and I are always talking about the 'nanny state.' This is a perfect example.

you give up too easily my friend.

you could get a bunch of your meth-head friends and customers to go and buy a box or two each at different locations.

in no time at all, you could have all the pseudoprine hcl (or whatever the fuck it is) that you need.

You can thank Linus Torvalds for this idea. Working in Linux, I've become accustomed to "workarounds"

I do ask one favour. Please let me know when you are homebrewing so I can stay away from your lab.

I have to get this off my desktop, but I don't want to lose it. One of the video guys sent this to me a while ago. He was putting together a commercial for a client and had the video cued up wrong at the end.

why i am proud to be latvian

I got some productive fucking-around done at work today.

I've been playing around with Django

a lot. It's a very young framework, but as long as the developers retain tight control over the architecture, I think it's got staying power. Not very long ago I started reading up on J2EE and Jakarta Struts, and it seemed to me to be such a brilliant idea, but like anything Java, it was just way, way more complicated than it needed to be. As I read more about it I kept saying, yeah, if this were done in Python instead we could just cut that out, ... and that ... and wow, you'd actually be able to use it. Django is gunning for everything in J2EE and Struts that is useful, without all that other bullshit that's only there to circumvent Java's fascist static typing. I get the impression that Django is a lot like Ruby on Rails

- except that I know Python.

Today I started poking around at the Yahoo Flash Maps API. I like it. I know this is going to offend certain people, but let's face it- AJAX+DHTML is an egregious hack based on a misbegotten API [XMLHttpRequest

I'm looking at you]. I think using Flash instead is a much more elegant solution to map service in particular, and Flash's HTTP library, while a little weird, at least suggests to me that someone thought it over before they released it. Also, Yahoo offers the Boring-old-image API to their maps, which I intend to use on our fledgling mobile website. Feature request: you should be able to dump a pile of markers onto the map and ask the map to make sure they all fit. Yahoo's agreement says Non-Commercial Use Only, but as long as (e:ajay) doesn't blow me in, I think we're cool.