Warning: Rant below. Stop reading now if you wish to avoid bad vibes about Buffalo, or if you are supersensitive about your taste in music and I am about to insult said taste.


All winter long, I have eagerly awaited the Thursday in The Square lineup for Summer 2008. Ice? Snow? Sleet? Icy wind off the lake? It matters not, because Buffalo has a fantastic summer concert series -- for free! -- with beer!! -- and really good acts!!! -- that make my Thursday evenings in June, July, and August a lot of fun.

Last year, there were some truly fantastic shows. Sam Roberts Band was great. The Old 97s, with frontman Rhett Miller dancing with girls from the audience, a total blast. Violent Femmes played to a huge crowd. Dropkick Murphys were pretty good. And there were some pleasant surprises like up-and-coming Grace Potter and the Nocturnals.

I have been anticipating this year's lineup with bated breath. And finally, it's here! And... it SUCKS!!

MAYBE the Gin Blossoms won't be terrible. And I guess it's sort of nice to have Jakob Dylan. But my GOODNESS, what of the rest of these lame acts?

"Galactic kicks off the 2008 season on May 29th with their unique blend of hip-hop, electronica, latin, rock, blues and jazz."

I'm almost not falling asleep yet.

"Colorado natives Yonder Mountain String Band make their return to Buffalo on June 12th. This quartet is heralded for their "untraditional" bass/mandolin/banjo/guitar line-up and love of bluegrass music."

I heard good things about their show last year, but can't we get some fresh blood in the lineup?

"Grammy Award winning David Sanborn will bring his Grammy Award pop-jazz fusion to the Queen City on June 19th. If you don't already know this 22-solo album smooth jazz musician, we're sure you will leave Lafayette Square a fan."

"Syracuse native Martin Sexton will headline Thursday at the Square on June 26th. Influenced by the magical sounds of the 70's, the Boston Globe says Sexton is "ripe with... raw, expansive talent.""

I'm ripe with raw, expansive irritation. And we're almost into July already. Oh my. This is getting frustrating.

"Kick off the 4th of July weekend with the son of iconic folk rock musician and lead vocalist of The Wallflowers, Jakob Dylan & The Gold Mountain Rebels."

I probably will, but you gotta love when they use a singer's parent's reputation to justify his importance.

"Revered guitarist and founder of The Fabulous Thunderbirds, Jimmie Vaughan rocks the stage of Lafayette Square on July 10th."

Revered, eh? Guess I'm not the only person in Buffalo with a shrine to Jimmie Vaughan in my living room. I'll be sure to keep a constant vigil until I get the opportunity to genuflect in front of his actual corporeal manifestation on July 10.

Somebody kill me... (so I can die and go be with Jimmy Vaughan for eternity.)

Those four books should go a long way as credentials for this once-revered (!!!) now washed-up acid-addled jam-band. Surely he must put on a great concert if he wrote four books! Ugh.

"Alternative rockers famous for the 90's hit, "Hey Jealousy," Gin Blossoms will take the stage on July 24th. We think fans will "Follow Them Down" in droves to Lafayette Square."

Yes, but only because there are no other half-decent acts lined up for TiTS this summer. Hey, I'm jealous of cities that attract good bands!

"Canadian folk rockers, Spirit of the West, will play Thursday at the Square on July 31st. This outfit hit the scene in the 1980's before becoming one of Canada's most successful alternative rock bands of the 1990's."

Most successful, eh? What did you say their name was again? I'll need another Blue Light, please.

"Post-grunge rockers, Saliva, will make their way to Lafayette Square on August 21st. Their single, "Ladies & Gentlemen" made it to #2 on Billboard's U.S. Mainstream rock charts and has been used by Sony in commercials for PlayStation 3 as well as the theme for NFL Network's NFL Total Access show."

Um... icons? I suppose I do own Candlebox's entire catalog, which I acquired for $6.52 from the CD bargain bin at the almost-dead New World Record. But then again, not everyone has a homemade Candlebox tribute jacket made from black stonewashed denim. Oh, and did I mention, Candlebox's drummer is a retread from 'Ugly Kid Joe'? The talent pool runs deep, my friends. Can you believe these guys have a "Best of" album? Is it an EP? 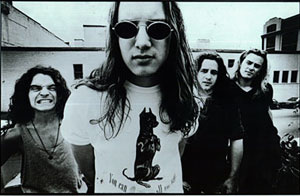 "Big Head Todd and the Monsters will close the season on September 4th. These indie/alternative rockers are known for their powerful live performances and their 1993 album, Sister Sweetly."

Fifteen years later, we shall enjoy their indie/alternative stylings in Buffalo, New York -- which is just about right: 15 years behind the times.

Thursday evenings in downtown Buffalo should be a great time -- in principle. For some reason, this year I think for once I'm actually looking forward to the moment at which the concert engineers flip the switch to Petula Clark's "Downtown". Or maybe I'll just stay at home and listen to some DECENT music.


It's not that I don't love Buffalo. I'm just disappointed by it.

This concludes my rant.

god damn it! The summer I moved here I saw Vince Neil (of Motley Crue/cocaine fame) Twisted Sister, and the Psychedelic Furs. A+ for 80's nostalgia.

But this? Who describes themselves as post-grunge? By reduction is that like saying you are post-post-punk?

but the Beer! the beer is so appropriately priced!
That shit costs so much more at Rochester music fests

There are 4 bands I would like to see on that list. Galactic is freaking awesome and I have been dying to see them live. Mike doughty should be pretty good, I havent heard any of his solo stuff but I liked soul coughing. I would prefer to see Mike Gordon with either Phish or Leo Kottke but I would still like to see what he is doing. Zappa plays Zappa is bound to be interesting. I actually like this lineup better than last years.

I like mike doughty personally...he was in Soul Coughing and now does folkesque quirky stuff

wow, i feel so weird for never having been to a thursday in the square concert. i guess it's my great distaste for people that's the reason.

grade A rant.
FWIW, galactic is good o'l new orleans brass/funk.
they should be good.
and while bluegrass isn't so much my thing, i got roped into yonder mountain last year and they were decent.
and i have a couple friends that will shit themselves when they hear zappa plays zappa is coming. (myself, not so much).
otherwise, yeah, a lot of has-beens and "son of ..." and "former ___ player for the ___"

but regardless of the act, it's still fun to get out there and drink a few cold ones on a nice day...

The Gander mountain string band or what ever they are called is pretty good and I saw Saliva a few years back and they are pretty good. I have an idea of why the lineup isn't to good.

1)I heard they lost money at some shows last year, not sure if that is true but if it is that means they can't pay as much for acts.
2) Stronger other venues to play. For example if you tour is a live nation tour you go to Darren Lake, if you want to play out side you Have the state fair in Syracuse or Erie County fair. Other venues are Town Ballroom, Club Infinty, Water Street (rochester) music hall, The Showplace, is the dome Theatre still open in the falls, Two places owned by the Casino, falls view Casino, Art park (out side again), The "new" Tralf and maybe a few places I'm forgetting.

On a side note In June Deathklok (different shows) and Hatebreed or playing with good supporting acts at towneballroom.

I do have one question what do you consider good music?

Indigenous [4 Sep, opener] rocks out with their cocks out. As for the rest of these bands, I dunno.

He clicked the link, and the link did beget the crazy hot Blues. And the people rejoiced, for the Blues is number one.

All the really good ones are playing Artpark

weren't the gin blossoms here a few years ago?

I, too, am dissapointed.

I bet they just want smaller crowds. Some of the large shows must have cost a fortune to manage.