The New York Islanders signed Alexsei Yashin to a 10-year deal, and the only thing he does consistently is underperform. Of course, with a big fat 10-year contract, he's basically untradeable.

Wrong. I like Rick DiPietro, I do. He's an exciting netminder and not without talent. But to sign a 25-year old goalie to a FIFTEEN YEAR CONTRACT? Whaaaaaaaaaat?!

This, on top of canning general manager Neil Smith and replacing him with Garth Snow. As much as I hate the Rangers and dislike Neil Smith, the guy is a pro with experience building a team. So hey, why not fire him right after hiring him, and replace him with a backup goaltender.

These are strange times for my beloved Islanders. Anyone remember the old Paul Newman flick "Slapshot!"? I'm wondering if it's beginning to come true on Long Island.

Oh, and apologies to all you wonderful e-strippers who helped us out...I still want to meet you all, but the job's got me swamped. Once I'm out from under, I'll be lurking about Elmwood looking for you. 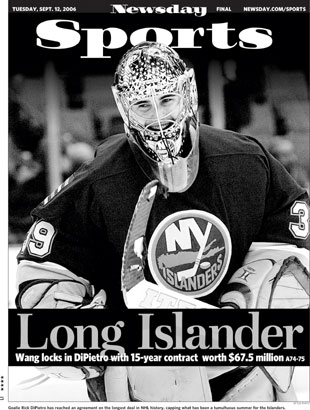