Interesting article in the Washington Post about some brain-imaging research. Don't know whether the study is any good, methodologically, but if there is a neurophysical similarity between gay men and straight women and between lesbian women and straight men, then... well, I don't know what exactly, but it's food for thought.

Similar trends emerged when scientists tracked connectivity in the amygdala, the region of the brain involved in emotional learning and in activating the fight-or-flight response. They noted strong similarities between gay men and straight women, and lesbians and straight men.

I was big into evolutionary psychology for awhile...alot of it makes so much sense that it is hard to deny but some (and by some I mean most) feminists tend to think that it is too much nature and not enough nurture theoretically speaking...but then there are gay/lesbian/trans folks (some of whom are feminist) who argue that they were born that way (which for the most part I agree with) which seems to contradict. The problem for me is that can be a dangerous when gotten in the hands of the wrong people... I wonder how this study would account for "masculine" gay men and "feminine" gay women??

well this makes sense on many levels... as in why lesbians and straight men have less of a tendancy to dress impeccably than gay men/straight women...
(i speak mostly of myself)

That is a very interesting article and you should read the entire thing. There are two things I'm wondering how did they know that everyone who says they are heterosexual really are and the same for the lesbians. My second question is what about people who are bisexual, bi-curious, or maybe a little bit of everything. For example there are girls who say they are stright but will get drunk and make out with a female at a bar or do the college experimenting thing but would never say they like girls and why don't I know any of those girls, HA. In any event very interesting.

I wonder how that research would apply to people who identify as bisexual? Or transsexual? Interesting...

Does the research shed any light into the, um, baseness of male sexual desire? What I am meaning to say is that I didn't think that the average lesbian was as into T and A as the average straight guy. They like "relationship."

...an ice-cold brewski out of a brown paper bag really takes the edge off of fighting for dryers at the laundromat. 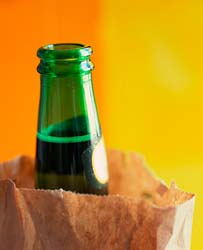 seriously... are there no open container laws in buffalo?

That disguise will throw all the flatfoots off the scent. Seriously, I think that might be why the laundrymat at Elmwood Auburn has a not glass bottle policy.

I love how putting it in a paperbag somehow makes it OK!

Pride in the Name of Unicorns

Sorry I missed the party on Saturday, I was exhausted from a long week and an unexpectedly long Friday night, and was resting up for Sunday. I ended up blowing off a friend's going-away party too and I feel bad about both... Friday was totally weird, A and I went to the Hellenic Festival and lucked into free tickets to the M*A*S*H Bash on the walk home, so we drank free beers and ate free bad pizza and smoked cheap cigars with like 147,000 of our closest friends, some of who were barely clothed.

Sunday was great fun. Started the day with a bike ride up Elmwood to Cecelia's, where we sat in the sun on the patio sipping drinks and eating brunch. Nothing like mimosas, Bloody Marys, and bacon to start your Sunday!

We timed it perfectly, settling the check as the Pride parade came up the street. Checked out the parade (sorry no pics), cheered a lot (Go Bears! ha) and collected a few strings of beads.

Next we walked up Elmwood and checked out the newly relocated Shoefly. A got a fabulous pair of Fluevogs on sale and I picked up a pair of boots for $50. They're great and it was the only pair left, and by sheer chance they fit (despite being 1/2 size down for me). What luck!

We walked up to Bidwell, looked over the scene, and settled down at Caffe Aroma for beers in the sun/shade, partially under the awning. Got a little bit fried (though not near as much as (e:fellyconnelly,44611) !) and sipped Rolling Rock from little bottles kept ice-cold in a bucket of ice (just five bucks for five beers during the soccer game!). Amazing people-watching at the corner next to the big tent, wow it was just so much fun. Among the people we saw were (e:paul), (e:terry), (e:matthew), (e:fellyconnelly), and (e:lauren)... and we had seen (e:lauren) walking ralphie on Saturday but we were whizzing by on our bikes and didn't have time to stop and fawn over the cute little SOB. ;-)

I did take one picture because I couldn't resist... a woman was walking her little dog and it had a t-shirt featuring a gay-pride rainbow with, yep, a UNICORN superimposed on the rainbow. I think even dogs are watching Planet Unicorn now! (see (e:jim,40361) ) Sweet. 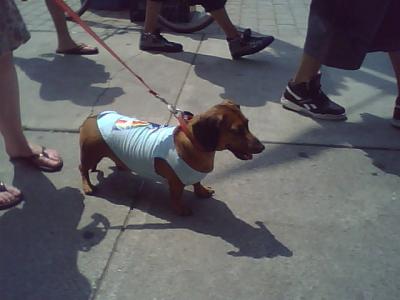 sounds like you had a nice pride, but if your shoulders don't feel like a crocodiles ass, you ain't got nothin on my sunburn baby!

That little weeeeener is so cute! But Ralphie is cuter.

Damn, I didn't know Caffe Aroma had booze deals during the Euro championships. I'm definitely going to check that out as soon as possible.

I skipped Thursday in the Square last night to go to the AAUW Book Sale in Crawford Furniture Plaza on Sheridan at Sweet Home Rd. Wow! If you like books, this is the place. A and I bought 27 books for $23.50 -- some good stuff, too. Most hardcovers are only a buck, and paperbacks 50 cents. A lot of older titles but some current stuff; the most current they have in a special section with specific pricing, but even these weren't so bad (e.g., I got Sarah Vowell's "Assassination Vacation" for $2.)

If you're looking for DVDs or vinyl records, don't bother, but if you love books, check it out.

Also went to Ming's on Main in University Heights for dinner -- omg their food is delicious. I'm addicted now, which is bad, b/c it's a little expensive as Chinese food goes. But it is damn fine Chinese, and the restaurant closes for the season at the end of June. :-(

Follow-up on TiTS SuCKS post (below): I saw a good chunk of the Galactic show last week and thought it was decent. Mr. Lif (that's L-I-F-with no m-f'in T) appeared with the band for a while and gave it an old-skool rap feel to go along with the band's rather difficult-to-pigeonhole style. It was really funny to watch all the uptight folks and bikers make a beeline for the exit as soon as Mr. Lif came onstage.

How was TiTS this week? Were Disco Biscuits any good? Did anyone get absolutely drenched heading home from the show, when the skies opened up and dumped what must have been an inch and a half of rain in 40 minutes?

Someone else's photo of some random food from Ming Cafe 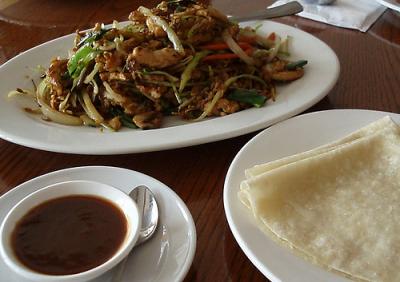 that food made me so hungry...

I need to beat this season closing thing and make it to Ming's!!! *anxiously wrings hands*.
I also need to to a bazillion other things but this somehow has wormed its way up the to-do ladder. (yeah, that sort of describes me).