Just wanted to post a belated thank-you to (e:kookcity2000) for the free oldy-school stereo [see (e:kookcity2000,39165) ]. Here's a pic of the stereo with some goofy/fabulous speakers i picked up for six bucks at a garage sale on the West Side. 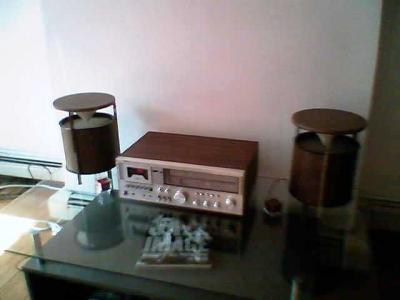 (Sorry for the poor photo quality, it was taken with an old cell phone.)


In other, more disturbing news, looks like (e:joshua,40409) 's post on Jim Cramer's freakout session a week ago was rather prescient.

World stock markets tumbled on Friday and central banks in the U.S., Europe and elsewhere continued an unprecedented infusion of cash into the financial system, as concern spread about the state of the U.S. credit market and the complicated array of investments it supports.

On Wall Street, the Dow Jones Industial Average was down nearly 200 points after the first hour and a half of trading on a day that was expected to add to Thursday's 387-point drop. Though still up for the year, Thursday's decline was the second-worst of the year and knocked nearly three percent from the index's value. Other U.S. indexes were down as well...

It was much the same overseas, as benchmark indexes across Asia and Europe shed upwards of three percent on Friday. Japan's Nikkei 225 lost 406 points, a decline of 2.37 percent, while the Hang Seng Index in Hong Kong lost 2.88 percent.

Europe followed suit: near the end of the trading day, London's FTSE 100 had fallen 184 points, a decline of nearly three percent; France's CAC 40 was down around three percent and Germany's Dax 30 had shed nearly 1.4 percent.

To calm the markets and meet a surge in demand for cash, central banks on Friday continued pumping money into the financial system -- adding to the more than $150 billion that authorities in the U.S. and Europe released on Thursday...

"What we have at the moment is just an all-around sense of panic," Marc Ostwald, a bond analyst at Insinger de Beaufort in London, told the Associated Press. "Quite clearly there's a lot of deep-seated fear out there and it's going to take a while to resolve this."

The sell-off overseas represents the expansion of a problem first glimpsed through rising default rates for U.S. home mortgages -- particularly among riskier "subprime" loans to less creditworthy borrowers. It has evolved into a global credit crunch, with borrowing costs for corporations and global dealmakers on the rise, and investors urging policymakers to help.

I've had fun following this. I am by no means a serious investor, but I love watching Cramer just for the entertainment value. A lot more entertaining than watching the value of my retirement account go up and down. (mostly the latter of the past month)

Here's my dumb question, but I haven't had economics since high school, and I really don't know.

When the fed puts money into the bank system, how does it do that? Does it just give them money? What money goes where? Is it through loans? If so, how?

The Fed tried to pump $24B into the bank system in an attempt to calm the fear, but it didn't work. They have been ignoring the deflationary nature of our market to fight inflation... and in a fit of irony dumped billions into the system on a "temporary" basis? No wonder nobody bought it.

The private equity firms - screw them. They made their bets and losing money is part of the risk. They were hedging their risky bets by buying a lot of this mortgage debt, which is why they are screwed. To make things worse, the credit problem makes it so they cannot borrow any more money. I'm with Cramer when he says that the equity firms should not be bailed out for making bad bets... but the people who are losing their homes? What about finding a way to have the government guarantee these variable loans so that people don't lose their homes, as a result of fluctuations in the market they can't control?

Another thing people talk about is the potential failure of several banks if this problem isn't straightened out, but if you look at the reaction of the world markets they seem to believe that this is a bit of a snowball thats beginning to gain momentum down the hill. I heard a rumor about an "emergency" Fed board session to potentially lower the rate. We'll see.

I saw an interview with Cramer that he did the same afternoon after his meltdown, and he explained that he felt obligated to speak up because nobody else would... and also said that he wouldn't be able to live with not saying anything about what he thought was not an "if" but a "when" kind of scenario.

chica and I went hiking at Letchworth State Park for the first time on Saturday. We hiked nearly half of the Gorge Trail, enough to see the three sets of waterfalls and some nice woods. The trail was very easy overall for being rated "moderate".

Here are some photos, mostly taken by chica. If you haven't been to Letchworth, go. It is a beautiful park. 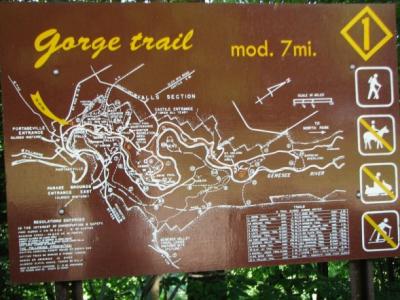 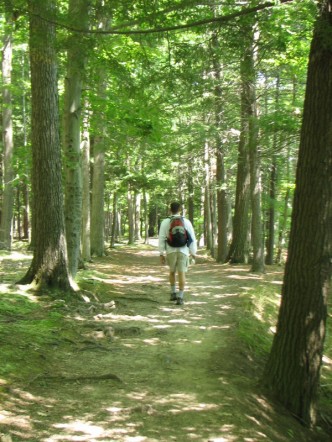 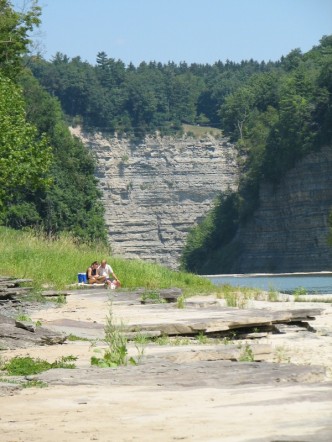 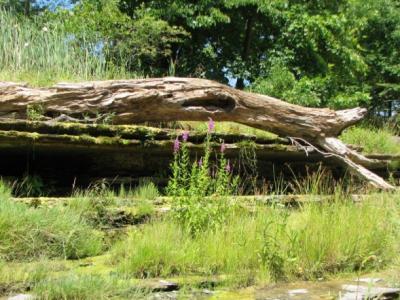 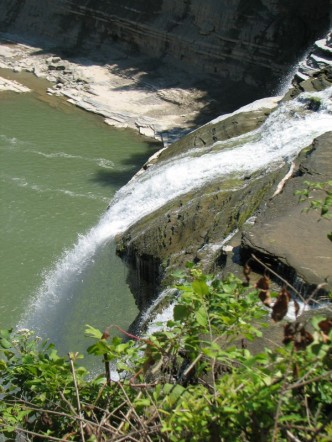 thanks random Asian tourist for taking this shot! 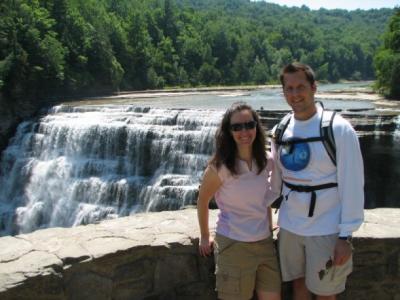 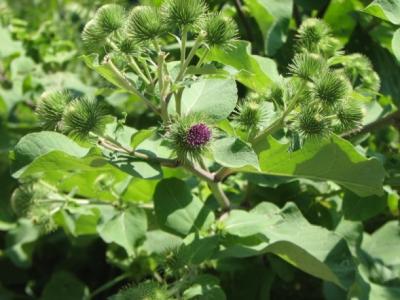 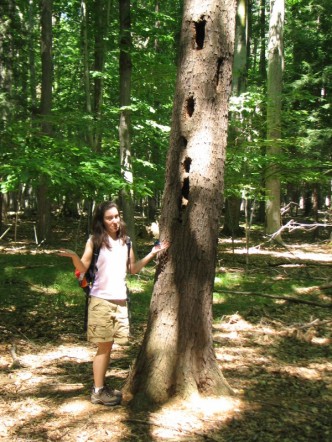 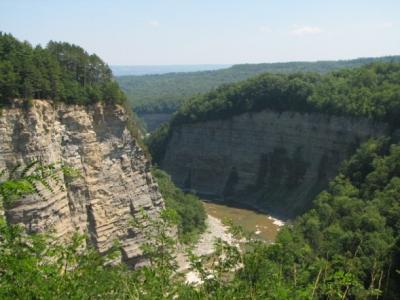 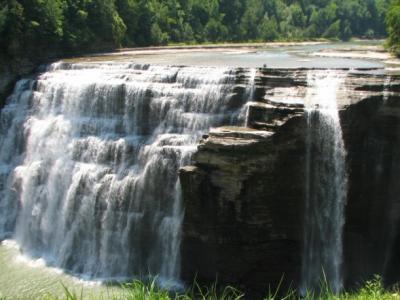 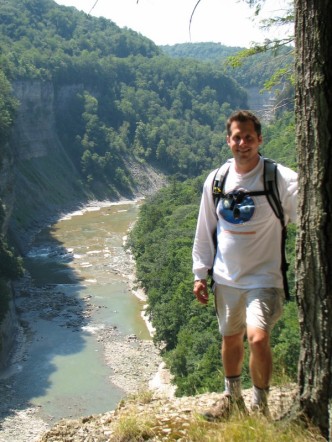 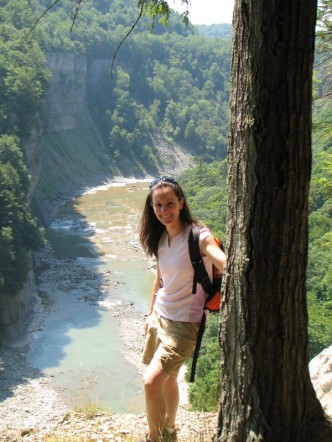 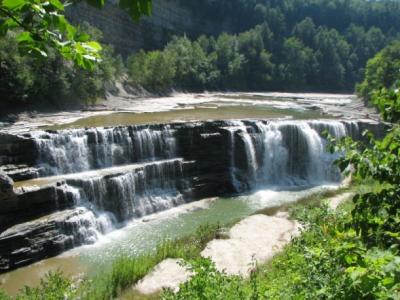 perched turkey buzzard that chica snuck up on 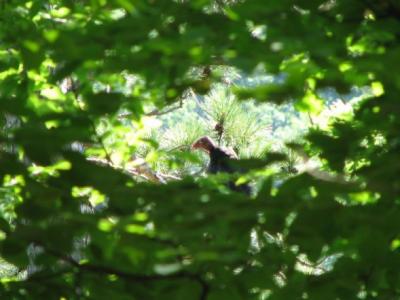 random trash i picked up--people are such savages...is it so hard to understand "pack in, pack out"? 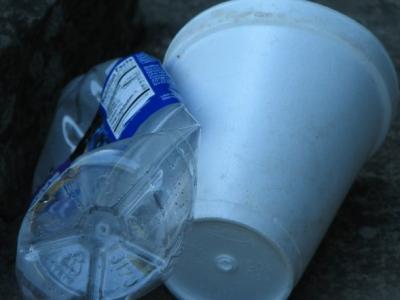 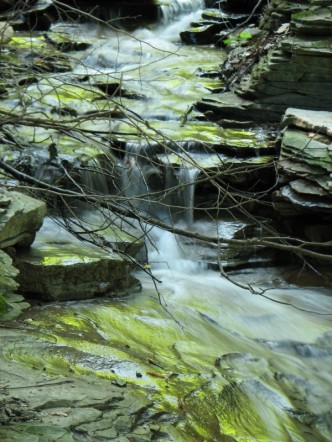 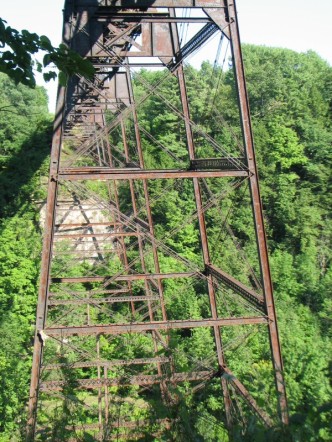 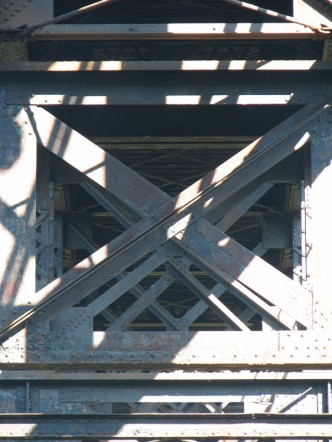 and this was the same trail that we were on. but we didn't go all the way down into the gorge because it started getting dark and i started getting scared that we'd get eaten by wolves or bears or werewolves or orcs or something.

hey, we were there on sunday! you guys should have called or something. are you coming to india gate night?

wow chica looks different. I didn't recognize her and said "who's that "until I read the captions. ¿Donde estas chica? Why don't you post here anymore?