I'm starting a new category called 'education,' where we can get ourselves smart'd -- together.

My great-aunt used to live in this house. She was the only person I knew with an antenna rotor. On top of her big oak television* she had a small plastic box with a knob on it that was labeled with a compass. She had neatly stuck labels on it pointing to where all of the broadcast towers were, so that she didn't have to fiddle with it when she changed channels. Adjusting a TV antenna was always such a black art I figure she must have just marked them all out trial-and-error-like.

Twenty years later people are getting fed up with the cable company and the DTV changeover has renewed interest in terrestrial broadcasts. But the whole concept of antennas has left the vernacular. Now that we're living in the age of Total Information Awareness you can just type in your address and get a cute little map telling you where to point your antenna. 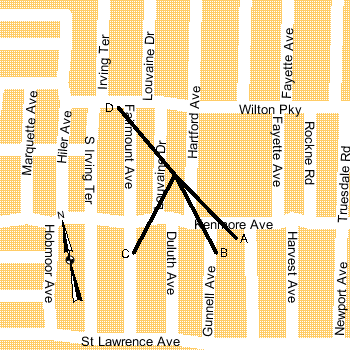 But it only tells you compass heading and distance. Inexplicably, this is nowhere near enough to satisfy my craving for information. Why does it say Channel 4 is 25 miles away when their studios are right down the street? So I asked the FCC.

Apparently I'm a total idiot because it turns out that they don't broadcast directly from the studios. All those antennas and satellite dishes, it turns out, are decorative.

Channels 2, 4, and 7 broadcast from various locations in and around Colden, whereas channels 29 and 17 broadcast from Grand Island. And almost every Canadian station that I've ever heard of broadcasts from the CN Tower.

The upshot is, because I am easily amused and I enjoy putting things in order, here's a map of every broadcast tower within 60mi of Buffalo.

Unless you're going to go crawling around on the roof I wouldn't expect to get anything more than 30-45mi away but at least you'll know you're pointing in the right direction.

And the weirdest part about it is, I don't even watch TV. We got no cable, no antenna, the DVD player is disconnected, and the digital converter is still in the unopened box. I guess I just like mapping things.

It isn't steel, but made out of macaroni and glue.

Really that huge tower at Channel 4 is just decorative - seems like it would be an incredible waste of steal. Maybe they use it to receive info?

you deserve a steampunk microwave for that map. very cool.

Man would you pay attention for like one microsecond? I'm trying to be educational here and you're in the back corner like throwing spitballs or some shit.

Pretty Interesting post. It reminds me of someone who wrote into the Buffalo news. They got the box and hooked things up. It turns out they couldn't get all the stations and that they needed one of the rooftop ones and the person couldn't get one of those where she lived, what a mess.

You could always do a steampunk oak microwave mod.

You will admire your microwaves interior, upholstered with real Corinthian leather.

Where do you get that catalog? The one with TV station accessories. The water cooler, the fake plant, the fake broadcast towers. I wonder if it is the same catalog with accessories for chinese restaurants.