This morning I read a "restaurant review" in Buffalo Rising about Left Bank.

It was a typical fluff piece that they write for all of their advertisers. I felt the need to comment because it was so poorly written and just screamed of being edited to death. Right after I found the original much more honest review on the author's blog here:

and posted it to Buffalo Rising's comments. Both of my comments were promptly erased and my login is now denied!

Buffalo Rising is such shit really. They are worried only about advertising dollars. When I worked at a restaurant and served BR's reviewer I was told to comp the whole bill. Not only did we know we were being reviewed we gave them the fucking meal for free! They aren't reviewing anything. They are advertising.

Not that it's really much different at the Buffalo News, although at least they don't get the meal comped. But every chef in Buffalo knows what Janice Okun looks like. Not much of a surprise that everyone gets high marks. Although I don't necessarily agree with these two all the time

at least they follow ethical standards. Neither of which BR or the News adhere to.

Found your post. I read BRO as a time killer just to see what's going on I might have missed. I was also just deleted and banned from BRO for questioning their piece about Templeton Landing. Despite years (decades?) of horrible reviews, his glowing review looks beyond questionable. They never post a negative or even neutral reviews of the place and they should just be honest about their sponsored posts. It does nothing for their credibility or Buffalo as a whole when people go to one of their promoted restaurants and it sucks.

Ironically, just looking at their grease-ridden pics of Left Bank fare in that article makes me not want to eat there. Pictures speak volumes and often cannot lie very well.

To be fair, I do occasionally stumble upon things in downtown Buffalo because of Buffalo Rising. They may not be the most objective of sources, but at least they do a good job of promoting new ventures and new stuff around downtown - commercial or not. If I am wondering about some new place that opened up or some new service that is being offered in the city (within walking distance of my place), chances are that a google search turns up a top hit in their reviews. Something is always better than nothing.

It's a pity that they are not very objective and do not respond well to constructive criticism.

Yeah, that blows. Notice how she went and edited her own blog explaining her shilling....ERRR....."cognitive dissonance". I like Josh's reviews far better. The Mighty Taco one was legendary.

A couple of weeks ago I was Spar's Sausage on Amherst St. and noticed a large jar of chocolate covered bacon on the counter. I had to try it considering my love of both. 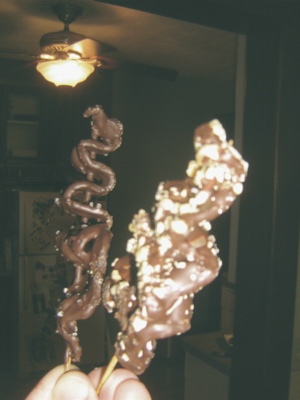 As much as I love everything about Spar's, really everything they make is absolutely great. The bacon was one of the most foul things I have ever eaten. I have had bacon as a dessert before ie. (candied bacon, caramel corn with bits of rendered bacon) and loved it. But this stuff was totally inedible. The second piece ended up in the trash.

I feel bad for not liking it. Especially since I love Spar's, but it just didn't taste good to me at all.

I would have guessed it was awesome - but totally inedible, huh?

Was It that that Bacon was bad or was it that it didn't taste right with the chocolate? With out being a chef I can say that some like Bacon Crisp and hard and some soft and flaccid and then there is the middle ground and everyone is different. I would assume that Crisp would be best to dip in chocolate or maybe there is some way they cook them both.... My point is maybe there is some other way to make it so it tastes great..... Assuming the bacon is how one likes it.... I guess my point is see what happens if you try to make it at home......

For all you bacon lovers out there. I suggest you try the bacon bloody mary at Blue Monk Brunch. It is sooooooo so good.

I was so excited when I saw the title and so let down when I saw your review. Maybe it went rancid or something and it is normally very good?

Your paella in your last journal looks so good.

ha ha ha... i read the title of your post and i thought you were going to say how much you loved it.

I love watching the cooking shows on PBS Saturdays. I know I should probably be productive but I learn so much by watching these guys. It also usually inspires me as to what I'm going to cook that week.

One of my favorites is "Avec Eric" which is Eric Ripert's cooking show. He usually has a couple of segments one usually is him either with a farmer, cultivator or artisan of some sort and the other he cooks something. Frequently his preparations use expensive ingredients, which most cooking shows do, and last week was no exception. On this particular episode he made Paella. I had never made it prior to last week and never realized how easy it is. It is however pretty freaking expensive given the price of seafood and saffron, but totally worth it for a special occasion.

I more or less followed his recipe but deviated a little bit.

I didn't use authentic bomba rice, not only because I haven't a clue as to where to procure that in Buffalo but because frankly I doubt I would notice a difference from any quality short grain rice that is available to me anyway. If I made it again I would definitely not even bother with the saffron at all. I don't really see what people love about saffron. It has a strange plastic taste to me. Considering the cost I don't really see any reason to use it ever again. I also think it would taste a little better if I had used homemade chicken stock, but I can't be bothered to boil chicken bones constantly.

I would like to make it for a large group and think it would be so much cooler if it were cooked over and open flame. Totally a dinner for company you want to impress with your cooking skills. Anyway here is the final result: 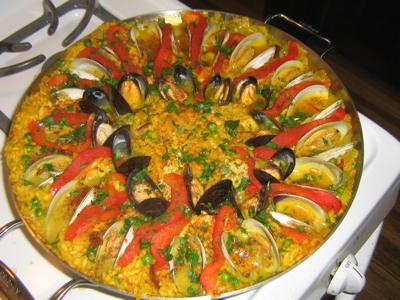 This entry is right in my wheelhouse. I also love PBS on Saturdays although I haven't seen Avec Eric yet. Would love to check out his restaurant one day. Also agree that Paella is most fun outdoors, with friends. Lastly, I don't get saffron either. Ain't all that.

I used Saffron from Spain. This recipe called for 1/2 Tbsp of saffron. Probably way too much in retrospect. I have always wanted to try Iranian Saffron because it is also supposed to be great. But I was a little turned off by Saffron in general after this. The white shell around the outside are little neck clams and the black ones on the inside are mussels. This is the recipe I used: :::link:::

Are those shells seafood of some kind? What was the recipe?

Saffron from Kashmir is the best spice ever. You only need 3-4 strands for the entire dish like that. Are you sure you didn't use too much. The power of saffron lies in how subtle its taste it.. I love saffron milk where you just put in 1-2 strands in boiling milk, add some honey and black pepper and drink it. :)