Well it has been a long few days adjusting back to eastern standard time, starting class and working full time. It was a fun trip and nice to see (e:ladycroft), (e:lizabeth), and (e:john). I was a little worried about how meeting up might work with only one of us having a phone. But despite our lateness at Zagreb airport to meet (e:ladycroft) it went pretty smoothly. Anyway I'll let the pictures do the talking. 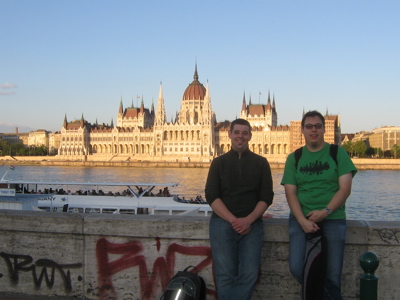 On the Danube across from the parliament building 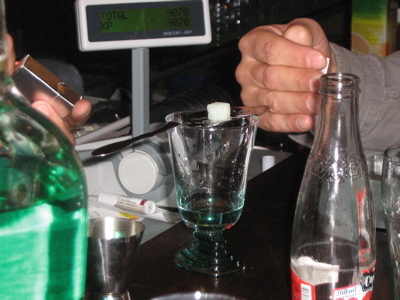 Oh absinthe, the headaches you create. 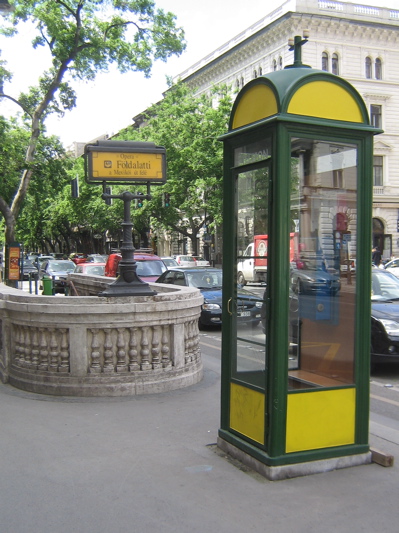 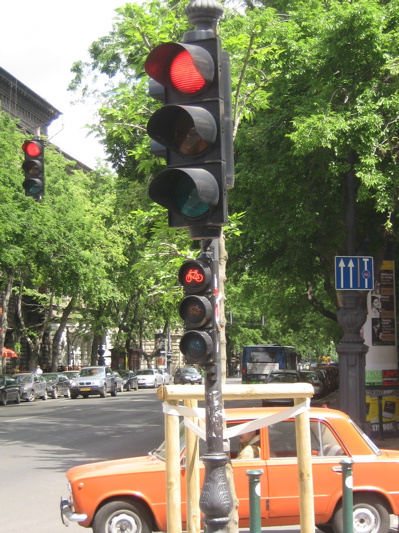 I love the separate traffic lights for bikers 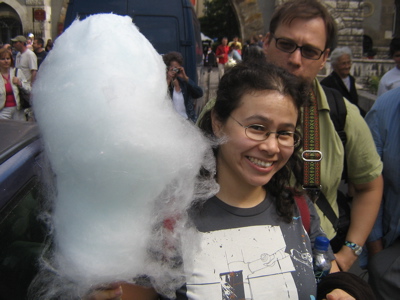 (e:lizabeth) with cotton candy the size of her head 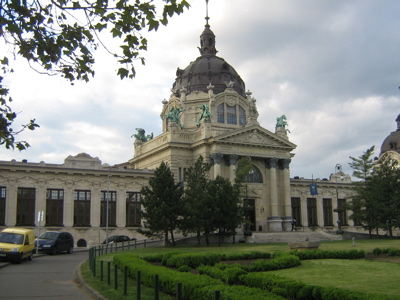 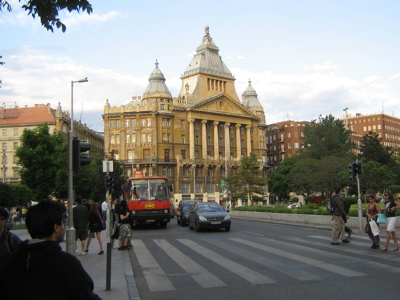 I have no idea what this building is, I just thought it looked cool 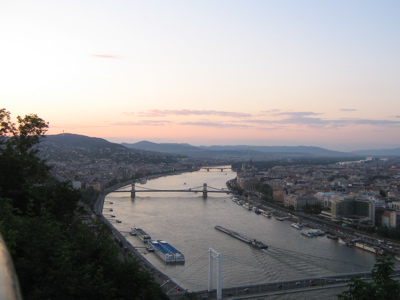 view of the Danube from the Citadella 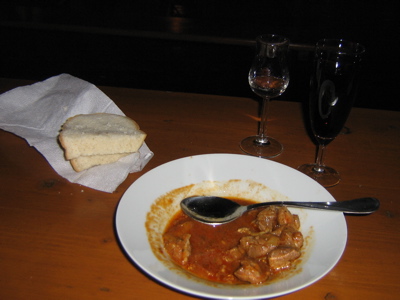 Whats left of my gulyas leves. I was told by the guy who served this to us that Hungarians take a shot of Palinka( which is a fruit brandy) after they eat gulyas leves. 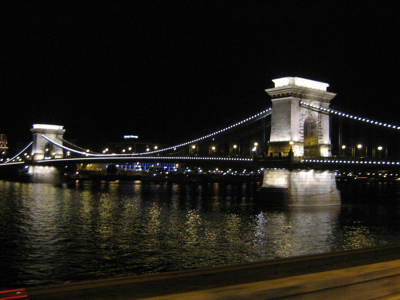 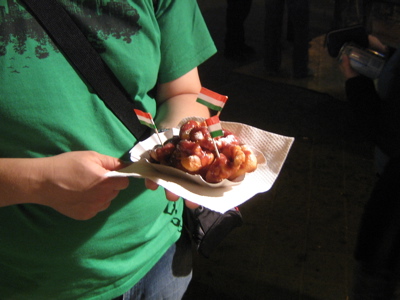 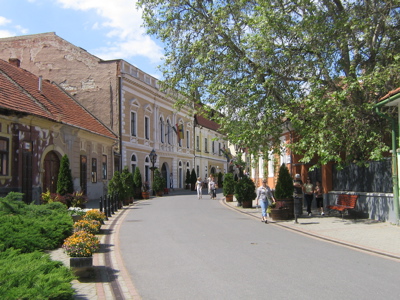 The streets of Tokaj in Northeastern Hungary. Home of the world famous dessert wine Tokaji. And to think I used to hate dessert wine. 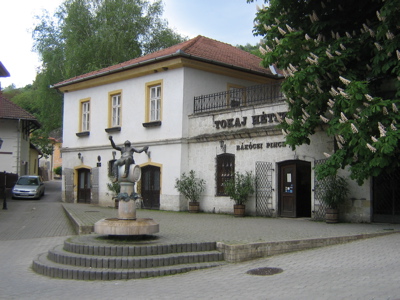 Rakoczi Pince, Tokaj. This is the largest and most famous wine cellar in Tokaj. They store and age wines from the Hetszolo Vineyards. 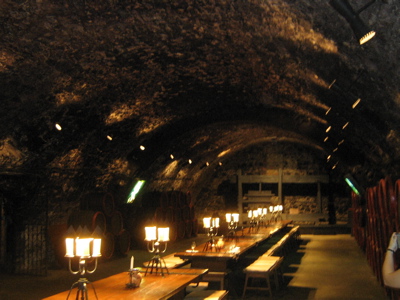 The tasting room at Rakoczi Pince, Tokaj. This is where we sampled some really awesome wines. 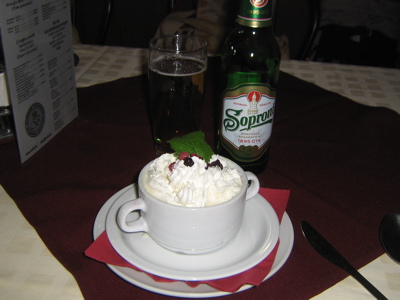 Gyomolcsleves, don't ask me to pronounce this, Hungarians couldn't understand me when I tried. It's a cold fruit soup that is served in the summer. It varied everywhere we tried it. Its basically a creamy soup made with sour cream and pretty much any kind of fruit can be added. Towards the end of summer when sour cherries are in season they are used more often than the pears we encountered frequently. This one also had whipped cream, black currents and blueberries. One place we had an awesome one(I don't have a pic), but is was a lime and peach cream soup with mint sorbet, absolutely delicious. 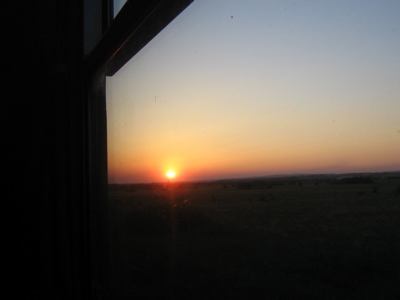 Train ride to Zagreb, to meet with (e:ladycroft)

Wait... When did you drink absinthe? Was that the first night when you went out to the bar by the pizza shop?

I finally got a few pictures up. Scanning takes forever.

You must have had a great trip. I was in Budapest and Croatia in 2001, I'd love to go back. You must have eaten well the whole time. I recognized the parliament building right away. I was there with a friend from Budapest. I hope you loved it as much as I did.

Your journals have the peculiar ability to make me hungry.

Thanks for the pictures that one building I have seen pictures of before but in your picture you can really tell that it is really long. A lot of great pictures and that includes the food, granted I'm picky and may not like how the stuff tasted but it did look very tasty I look forward to seeing the and hearing more of your travels.

So I haven't been here all that long, 8 hours including a 1 hour nap. But I have managed to learn a few things so far.

- Cigarettes come in packs of 19

- Do all of your shopping before 6pm

- Don't go into clubs with hot women you meet on the street (not that I have experienced it, Lonely Planet warns of this, and there was a warning posted at our hostel)

- Orange soda officially kicks ass in all of the European countries Ive been to.

For 8 hours I would say this is enough. Im currently dead tired and forcing myself to stay awake so I'm not up at 4am. Hopefully I will post some pictures of the (e:trek) soon.

You know that is a good point about Vampires I didn't think of that, yeah how hot they are, are a factor I do wonder even more about that?

i am intrigued as to this whole 'no hot women club' thing... are they considered prostitutes? thieves? vampires?

and if they are hot enough, would it be worth it?

I wonder what that hot women warning is about? if it is that they are after the money of if they are part of a gang or if they are on the street they sell there bodies so they shouldn't come in with you? In any event hope you are having a great time and I look forward to seeing some pictures.