Just kidding, I could eat bacon with a side of bacon for breakfast. I did however make another vegetarian dish tonight. Mushroom and Caramelized Onion Quiche. This was my first quiche and I'm reasonably pleased with the results. I cheated a little bit with the dough and didn't let it rest before I baked it. It did shrink a tiny bit, but it still turned out flaky and delicious. 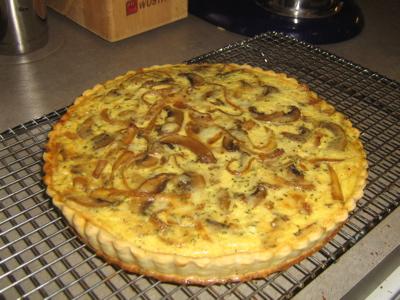 I used to hate quiche as a child, come to think of it I hated mushrooms as well. This dinner would not have been well received by me at age 8. I have a strange memory of quiche from 7th grade. In my English class there was some sort of contest. I don't recall the the contest but the prize was either a pizza party or a quiche party. I do like quiche but the pizza would probably still win out today.

I'm with you. I like quiche enough, but good pizza would still win out.

and in the 7th grade, I don't think I would have eaten something called, "quiche".

Super new rule! If you post a DELICIOUS looking picture, you need to cut that delectable thing into pieces and go around (e:strip) giving peeps a sample.

Don't worry. If you feel awkward, you can always pretend that you are a caroler giving out goodies instead of assailing people's ears.

So every now and then I've been known to cook something vegetarian for dinner. Last night I made Shakshuka 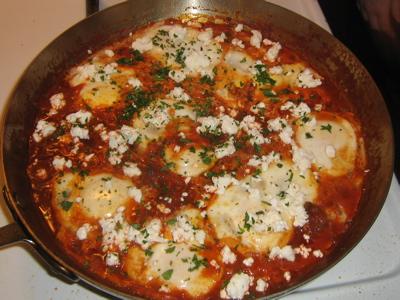 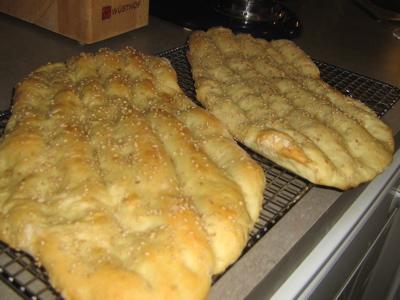 Shakshuka is an Israeli breakfast of eggs and tomatoes with some feta and few other things. According to Saveur (where I stole the recipe from) it is a Libyan dish. The Nan e-barbari is Iranian but it was originally an Afghan recipe.

Anyway as I was chopping vegetables it dawned on me that it was vegetarian but not vegan. Then I started thinking about all the different types of vegetarianism. I work with a girl that claims to be a pescetarian. Which means she won't consume flesh unless its that of a fish. And then there is the flexitarian which is such a stupid concept to me. Basically it means you are vegetarian until you are in the mood for a bacon cheeseburger. I also know someone who states emphatically when referring to his wife and his eating habits that "she will eat it if it swims, but I will eat it if it clucks". I suppose that should be another category. Is there any other types of vegetarianism out there?

Vegetarian food does not bother me, given that it doesn't suck. I wonder how many people out there are vegetarians because they like it, and how many crave a rack of ribs with a side of bacon on a daily basis. With that said Shakshuka is pretty damn delicious.

I was vegetarian in high/middle school. My mother is very Catholic and couldn't understand that fish is meat. To this day we have arguments about it, though we have them over very rare steaks.

But that bread looks AMAZING! I love how the lavash-like flatbreads look - seems you followed that recipÃ© to the dot.

Thanks! I went to the kitchen fully intending to make a whole wheat naan using your recipÃ©. But then I got derailed and soaked urad dal :::link:::(bean) and moong dal :::link::: instead to make an altered version of Ragi Idlis :::link::: . If they turn out remotely presentable tomorrow, I will post. Right now, I am waiting for some teeny-weenies to atleast start the fermentation before I resort to mixing in the yeast.

Apparently my grammar is shit as well.

(e:tinypliny) This is the recipe I use :::link::: . It's not very exactly clear and the grammar and punctuation are horrible but the bread turns out well.

As someone who calls herself a vegetarian, i define my diet as "ovo lacto" vegetarian. I won't eat animal flesh of any kind, or additives to food that involve killing the animal (ie jello --- eeewww). But, i do eat dairy and eggs.

I think everyone chooses to be a vegetarian for different reasons, and often as life evolves, so does our diet. At work, meals can be very difficult for me, since the state of new york does not care that i won't eat that cheap nasty cut of meat that we serve, but so far, i am enduring.

I will say, however, because my reasons for choosing to be vegetarian are ethical or moral and not health, i do find myself craving meat, particularly holiday meals with turkey and ham. Or maybe i miss being a part of that....?

RecipÃ© for the Nan please? :)

I chose to be called a comfortarian. :D

This looks delicious JB. This is almost like the huevos rancheros of northern Africa!

What the fuck? What happened to the whole "labels are just words" movement? =D

my minor in nutrition is failing me at the moment, but there are several nutritional classifications for different types of vegetarianism. Personally, in terms of labeling, I think someone is vegetarian or they're not, with vegan being more restrictive.

Easy enough, pretty much all food appeals to me.

Shakshuka and Nan-e barbari looks and sounds delicious. I enjoy reading your adventures in various cuisine.

Lol@the flexitarian comment. When I first heard that term, I embraced it for Drew and I. Drew was a vegetarian (using uncutsaniflush's definition) when we met. Then, he started to eat seafood when we went out on dates. Around the same time, he started the ministry thing, he didn't want to make an issue out of the vegetarian thing. So he would eat meat when served to him at a church event or a church member's house. He dropped the label of vegetarian

When we were first married, we ate vegetarian meals for dinner and Drew generally didn't buy meat or eat meat at home. Only I did. Now, Drew will eat meat when I make it around the house.

For me, Flexitarian is what I use to try to explain my diet to people who don't understand the gray between black and white. It's a binary between eating lots of meat and no meat. I think Americans eat way too much meat. I think our eating habits are way too meat centered. I have some concerns over the ethics of the meat industry, but I don't necessarily have an issue with slaughtering an animal to eat meat.

Over the years, I've put thought into how much meat I eat. On average, I eat about two lbs of meat a month at the most, which I think is far less than the average american. Now I'm moving into thinking about where I get my meat. Soon, I should be getting organic beef from Native Offerings. And I'm really excited about that.

(e:uncutsaniflush) is totally right about it all being the Pope's fault! I'm from a heavily Catholic area and most folks don't get the "fish is meat!" thing. "Heidi, do you want fish fry?" ew.

"I'm a vegetarian, I don't eat anything with a face." -Princess Daisy, 'Super Mario Bros.'

I've heard that Jerry Garcia said a similar thing, "I don't eat anything with an asshole." but I can't get confirmation from Google. It seems a more technically accurate statement.

Personally, I think that the Roman Catholic Church is responsible for many Western people's idea of vegetarianism. Consider this, on "meatless" Fridays, one could eat fish. The Pope sez fish ain't meat. Vegetarians don't eat meat. Therefore, vegetarians eat fish.

I've known "vegetarians" who ate seafood and poultry but no beef, pork and lamb.

To my mind, a vegetarian is someone who does not eat animals - no matter if the critters are in the air, in the water or in the ground.

Vegans are the fundamentalists of the vegetarian world - they don't eat animals or anything that comes from an animal. So no cheese or eggs for vegans.

And, of course, there are some religions that do not allow their members to eat animals.

most Vegatarians don't count fish and say it isn't meat. But it is meat. I have an uncle who would not eat meat but would make an exception for Beef on Weck when he would visit Buffalo, I don't blame him for that at all.

My sister had a friend who wasn't anything tarian but she wouldn't eat meat if it had 'jiggly wigglies' in it - ie, anything that looked like the inside of an animal. Chicken wings, for instance, were a non-starter. And yet, they went out for crawfish once and she tore that shit up - antennae, eyeballs, and gelatinous brain goo notwithstanding.

Hate to use this again but you can't be a lil veggie any more than you can be a lil preggo!! Your dinner looks so good. I'm excited to learn more and get better. Btw let's talk about beer sometime like we did at the wedding.