Rufus at the Albright-Knox! The National opens. Can't wait for Friday, June 18! 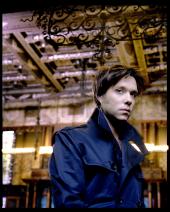 BOO! To The National opening up this show, they should have booked their own show as the headliner.

In keeping with (e:MrMike,48125) I'm wondering about influential records -- not necessarily autobiographical, but what are you listening to these days? Like, what are your current top 5 records/CDs?

So, at the risk of starting one of these threads where everyone bashes everyone else's muscial tastes...

I've been listening to (in no particular order):

2. The most recent Death Cab for Cutie record, "Narrow Stairs"

The fifth one is a compilation of songs--all remakes--sold (apparently) to benefit children in war-torn countries. The original artists, who are iconic rock artists, choose a performer or band from "the younger generation" to remake one of their classic songs. Beck does a fantastic version of Dylan's "Brand New Leopardskin Pillbox Hat," Hot Chip does a groovy take on Joy Division's "Transmission," The Hold Steady does their best impersonation of the Boss on "Atlantic City," Franz Ferdinand does a great version of Blondie's "Call Me," TV on the Radio reinterprets Bowie's "Heroes," etc. Lily Allen and Mick Jones's remake of the Clash's "Straight to Hell" has been stuck in my head for two weeks. There's other great stuff on there too (complete list of tracks here:

So, what are you listening to? What are your current Top Five?

Hmm, i seem to have missed the post at the time you wrote it... I got the War Child compilation a while ago- definitely cool.

And I just got Rules by The Whitest Boy Alive- I loooove it.

And a single by Owl City (fireflies) [actually it was the itunes 'free song of the week']. it's a little cheesy and bubblegum-y, but it reminds me of death cab and I really like it.

The Evens: The Evens

Devotchka: A Mad and Faithful Telling