This buffalo totally has a wang. 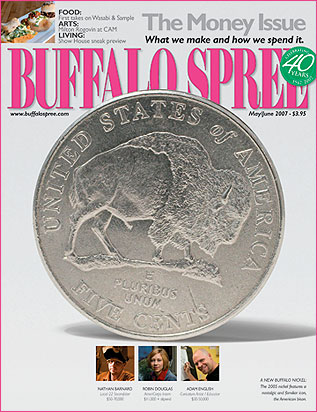 put googly eyes on it!

Come on, it's American money. SOMETHING has to have a raging hard-on, either this or the eagle.

a substitute for political commentary 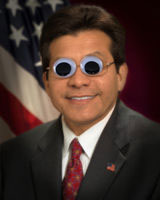 I think it would be great to start a 'political cartoon' of sorts with no actual commentary or talent - just a picture of today's top headline with googly eyes. You probably think that's stupid, but I bet the comment threads would be incendiary enough to generate and maintain significant traffic. How many steps does it take to get from 'Alberto Gonzales has googly eyes' to ' (e:zobar) is an America-hating fascist?'

(e:zobar) - I can't believe you would abuse a photo-editing program for your own political ends, do you think America will tolerate a Alberto Gonzales with googly eyes - let alone on the internet! (e:zobar) you are intolerant!

The real question is if (e:zobar) and his googly eyes are trying to make political science, a science of the arts - using real media techniques to grant meaning to images of Alberto Gonzales with googly eyes that say much more than words - in Buffalo, NY.

I think what would be cool is to make what ever reason they are being mocked or put down as part of the cartoon. So say Bush is shot he would bleed oil and the band Aides would be Haliburton brand. Maybe if it was a picture of Imus he would have black curly hair or something.

You aren't a fascist, you are a communist. Get it right! Easy - only kidding man, only kidding. =P

I'm bored with political commentary lately. Politics is at such a low and despicable state of affairs that I'll take your googly-eyed cartoons over anything said on the news. I insist that you torch Ted Kennedy though.

I have begun a perverse new project which I call Billustrator, a simple drawing program with a familiar interface: 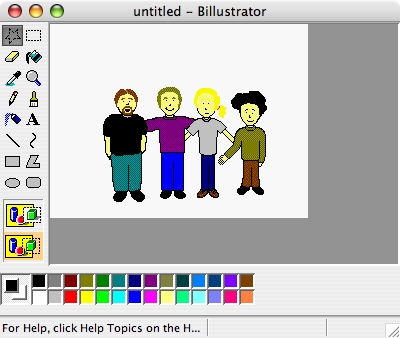 It is written in Java, and thus runs on Mac OS X and Linux as well as Windows. It will be small and lightweight, so that users can do simple editing quickly. The architecture is extensible by design, and so it is not limited by its own assumptions. I think it would be keen to be able to embed it into web pages as an applet, and thus enhance the graphic capabilities of this 'Web 2.0' nonsense. [Along the lines of the (e:strip) chalkboard, only more so.]

(e:dragonlady7) thought I was cracked, until this afternoon when she said she needed to crop & scale an image and had to resort to Photoshop. I guarantee that Billustrator could have had the job done before Photoshop had even finished launching.

The main UI is nearly done, and all the commands and tools are stubbed out. Even the builtins are implemented as plugins, so the plugin architecture is coming along as well and should end up very robust. More details [or not] as they become available [or don't].

Sounds like a cool project! It would be neat to have this as a plugin on estrip.org.

carolinian, have you tried using the Gimp with the X11 program in Mac OS X? It's a really cool open-source image editor that I use all the time on Linux.

Actually it wasn't so much that I needed to crop and scale something (which I can do in iPhoto, but that also takes about eight years to load, now that I have over ten thousand photos in it... Sigh), but that I needed to draw a quick diagram of something to explain a point. More and more I need to draw quick diagrams, and less and less do I have time to crank out Photoshop for it.

Though, as I can't find my tablet or my mouse, it's kind of almost a moot point. I don't know how well I can doodle with a touchpad.

Ordinarily, I'd say you were off-your rocker.

But considering that there's really no simple paint application that comes with OSX, it's perfectly understandable. It's kinda weird that you get lots of software for ripping and editing MP3's from iLife, but the second you need to doodle something, you have to buy an $800 program. I've been using JDraw for several years for such doodles; you may be able to harvest some useful Java code from that.

Of course, you will need to add Bonjour and Flickr support for added geek points. ;)

One of the benefits of working here is that sometimes people will send press releases for their events to me instead of the calendar editor. This came across my desk this morning, and I sincerely want to go: 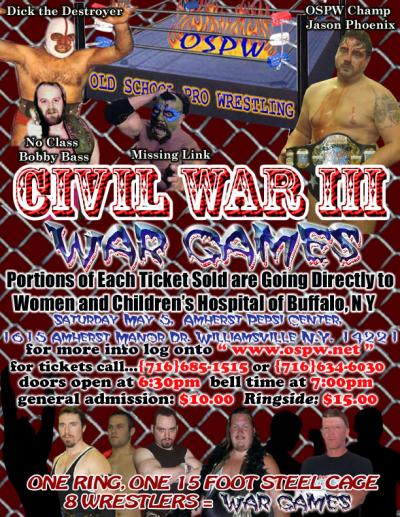 My money's on Dick the Destroyer or Unnamed Wrestler #4 [with the feather boa].

Category: hassled by the man

This dude just tried passing me in the oncoming-traffic lane of Kenmore Ave. After he realized what an idiotic idea that was, at the next red light he got out of his car to yell at me. The light turned green as he was getting out of the car, and I was a block away before he managed to get back in and get his car back in drive.

Next red light I was not so lucky. Homeboy comes charging out of his car and starts slamming on my side window. Reassuring words from the passenger side: 'he's wearing a police badge...' Fine, I roll down the window. Homeboy starts howling about everything under the moon but I think all I did was give him a blank stare. Light turns green and he books down Kenmore 50mph.

Instant poll: DWI off-duty cop with a Napoleon complex? Or a flabby ex-gay-costume-stripper bitter about his long-past glory days?

This is why cops are so intolerable. They think that a badge is akin to some sort of royal seal that grants them all kinds of latitude in how to act when they AREN'T working.

Its too common to be funny anymore.

2. yes, i'd love to hear more from the guy who used to live in qatar!

When I was growing up we were required to spend time in a simulator :::link::: learning how to effectively deal with such situations.

i work for the liberal media

The Liberal Media is totally keeping it a secret. Why else would Maureen Dowd be such a frigid little vixen?

im in ur internets 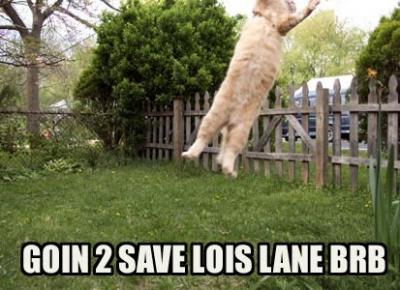 I will admit I didn't look at all the pictures on that site but a lot of the ones I did look at are cute and funny. 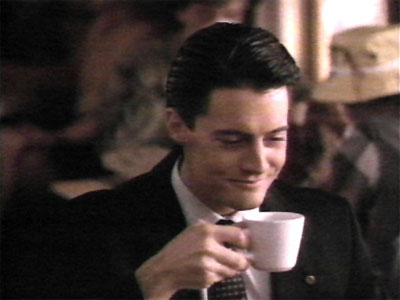 for those of you who already own Season 1. For boneheads like me who were waiting until Season 2 came out to buy both, Season 1 is totally sold out and is fetching around $100 on eBay. I asked some random dude

about it and he said if you don't have Season 1 already he'd recommend waiting for the full box set in October.

wow, that sucks about season 1 being discontinued. i got mine back when it came out.....amazon has some used one for 60..not a bad price. got season 2 today...fire walk with me is going to rereleased later this year in a 2 disc set. i want to get my had on a copy of the pilot....which much to my dissatisfaction is not included in the season one dvd.

I am about half way through season two right now. I downloaded a pirated version that has Swedish subtitles along the bottom. This, however, is much much better.

thanks for the heads up.

for the lamos who lamed out on us 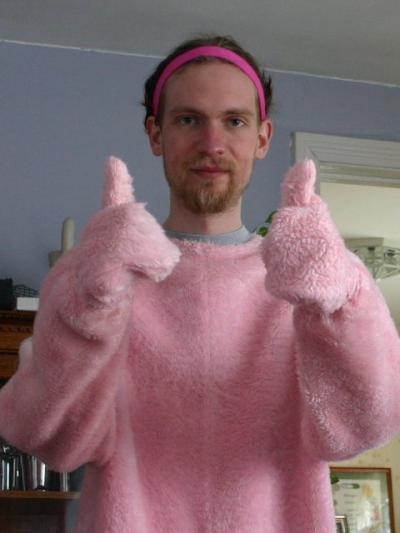 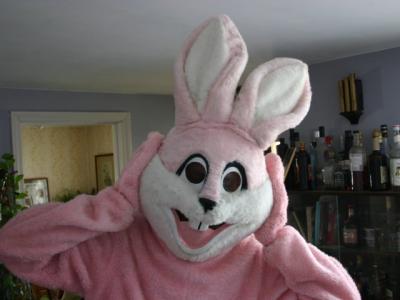 Photos of the game are forthcoming

darn it, I was going to comment both on the pink headband and make a Donny Darko reference. Early bird and the worm and all that I guess.

Haha - the bunny outfit is one thing, but did you really have to wear a matching pink headband? I still think its funny though.

My lame ass was with my husband's lame ass in Hamilton, visiting my mom. We weren't able to see her on her 60th birthday about 2 weeks ago, so we went this weekend. The Queen City Roller girls need to check with our schedule from now on. This isn't the first time it's happened!

I like the pink headband on you. Good look. Nice bunny costume, too. I have an Eeyore costume that's big and fuzzy like that... maybe we can get together and scare some children together.

Do you believe in time travel?