Let's see you try this dance!

How come I have never seen this crazy dance before. So insanely awesome! :)


Looks like the women have the easy parts. hahaha

The footwork is SO fancy!

Insane. I wish I could do just one flip

The Waltz is my most favourite kind of classical music after sonorous abstract cello recitals and baroque orchestral works. Wait till you reach around 3:20, when they give the dance a modern interpretation. :)

hah, I would love to (e:metalpeter) but I need a partner who would be okay with me being bald some months of the year and who won't have trouble seeing my face from far up there. If I get here, the dress won't be an issue at all. :)

This is it! (e:Matthew), you need to enter the AndrÃ© Rieu photography contest! 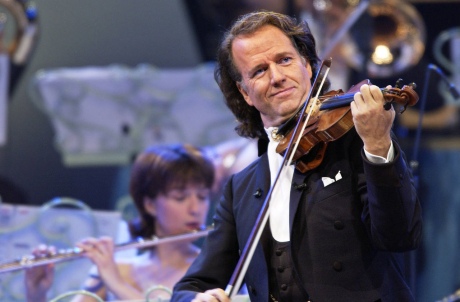 DO it now!!
Think of all the glory if you are picked!!

I needed a hardcore workout today to channel all that excess nervous energy. Quite luckily Kolleen emailed me right when I was thinking about going to her class. 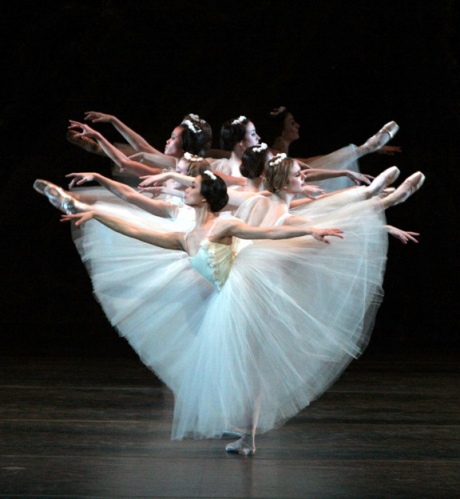 I was soaking wet by the time we were done and far away from anything resembling graceful but I had a bunch of fun.

They have a African Movement Workshop on Wednesday. I know it conflicts with yoga, but is anyone interested in going with me? It's $12.50 for the evening if we turn up to the class together.

Unless there is a lime green one.

She is definately the black swan.

So are you the White Swan or the Black Swan ? Kidding never saw that movie but yeah Ballet is intense (Never done it ) with being on toes and leaps and landing and.........

Break a leg. The keith way.

Oooh, sorry I got in the way, I didn't realize you were filming.

You did great on your bike. When are we biking again?

It was! We missed you! I biked after 3 years and (e:Heidi) was my bike-task-master. She didn't let me get off my bike. It was harrowing to say the least.

Now that's a stripper in the making if I ever saw one.

I finally did it yesterday. I got to the Upward Bow/Wheel pose without sagging on my yoga mat. 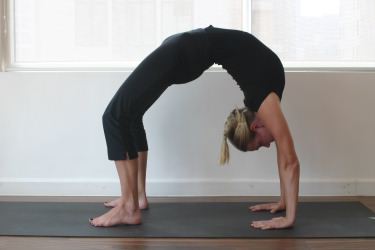 I wasn't expecting to reach the pose at all. But my head was suddenly suspended in mid air and I was looking at (e:Paul) on the nearby mat upside down. It was a very happy moment. Erin's wonderful practice at Hand to Heart yoga has finally started making a positive difference to my upper body strength.

And now for the next yoga frontier... 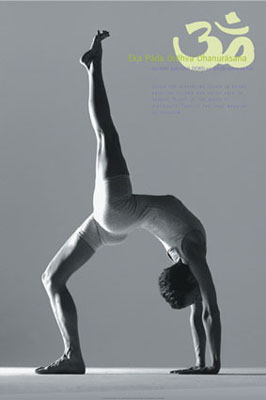 (e:Paul) - not only did Erin say it was the next step, she demonstrated the Eka Pada Urdhva Dhanurasana (the one-legged upward/inverted bow). Those must be some really high-powered specs! I thought I was the blind one because I intentionally don't wear specs.

I am pretty relieved that you are not my yoga teacher, (e:metalpeter)! Last time you were insisting that do all the inversions with tea cups balanced.

LOL, but you are right though. I am not sure I could do it all the time. Maybe yesterday was a fluke... I am going to try and reach the next stage but can't tell when that will be. And (e:Paul) is always messing up gymnastics with yoga. He doesn't see the fine line... ;-)

Now related to that (e:tinypliny) now that you have that down... The next part is to get it mastered so you can all ways do it... Not not sure if they do this in Yoga... But I think the next step would be to start moving your hands in closer to your feet (acrobatics maybe.......Once they are in (from what I have seen) close enough both feet can come off the floor?

Isn't a back hand spring Gymnasitics?

Dammit... yoga was calling me last night and I shoulda just listened. Congrats on the wheel!

(e:Terry) says she said it. I must have not noticed because I didn't have my glasses on.

Oh I can totally do that. I wish she had said that was the next step.

The next step after that is back handspring!

I now think stretching is the key to being fit. Every element of ballet and yoga that make me feel awesome about myself involve stretching in some form. I think this post summarizes the value of stretching:

What if you used every small timespan of just twiddling your thumbs to stretch a muscle instead? How many stretches could you accumulate in a day? How much fitness would you gain? What if you stretched whenever you remembered to throughout the week, throughout the month, pretty much whenever it was feasible? Would it make a difference to your body?

I am going to find out!! Mid-year resolution #1!

She is a trainer that specializes in motivational interviewing, she is doing the stretching as a side thing.

Unlimited summer yoga passes now to Aug. 31 $70!!! :::link::: I already got mine. I am committing myself to one yoga class each week during bar review. Wednesdays are most likely but there's one Tuesday nights that looks like it might be an okay alternative.

They have a PhD for physical trainers? Why am I not doing such a cool PhD programme?!

It was just me and someone else from my office with the PHD trainer they hired, it really did seem helpful to do that this morning. We did it in the short period of time when we get there and when the phone lines open. She is hoping to do this twice a week with a couple people each time.

Unfortunately, no :( I have too much on my mind... I don't think I can afford the 1.5 hour today. I am promising myself that I will go regularly from next week till the end of summer...

Speaking of stretching - are you going tonight?

That is funny, (e:libertad)! Was it for your office alone or for the whole institute?

Well.. stretching is exercise. The best form there is! :)

A couple of those stretches look a lot like a couple exercises....

That's funny you wrote this today. Today at the start of my work day we went outside and did stretches and simple yoga poses. They are testing allowing us to do this a couple of times a week. We shall see how long that lasts. It was a really nice surprise this morning. 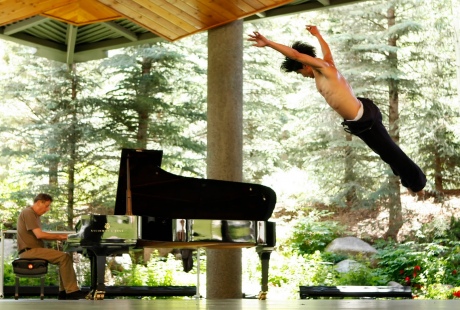 In particular, I loved this sequence from the documentary.


It showcases an intense ballet lesson that Sokvannara "Sy" Sar, a Cambodian who came to NYC to learn ballet, takes with Olga Kostritzky, simply the best beginner ballet teacher there can be.
Notice Sy's perfect form and the controlled leg lifts. I wonder if I will ever get there.

I had no idea Google put whole documentaries online on Youtube. You can watch the entire film here:

After pining for yoga class for a month, I finally made it yesterday. Thanks mainly to a strategically timed phone call from (e:Paul), just as I was getting ready to spend the evening in the office.

In class, Erin gave us the option of trying the Parivrtta Surya Yantrasana (compass or sundial pose) or leg splits. I was secretly interested in going the splits way because of my not-so-secret obsession with ballet. But the sundial/compass pose looked pretty cool so most of the class that had an opinion at that point voted in favour of trying it out. I decided to abandon my secret agenda and went with the class.

And, wow! The Parivrtta Surya Yantrasana was totally worth going with the class chorus. 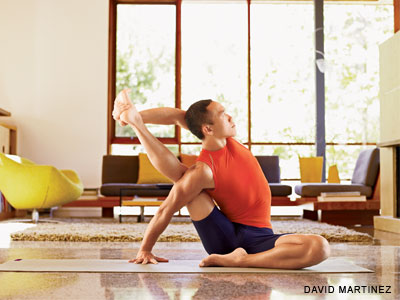 That doesn't mean I reached the full expression of the pose. Far from it. But I ALMOST got there with a yogi's choice scaled-down version. (e:Paul)-Super-Yogi later told me that this pose was tough, even for him. He has a theory that he is only good at asanas that involve upper body strength (but we all know it's just a theory and a flawed one at that, because I did watch him out of the corner of my eyes, and he totally reached the asana!)

After yoga, (e:Paul) and I hung out for dinner. We cooked palak paneer (which, I thought was a slight disaster because our most-probable guess purchase of a "paneer"-like-Italian-basket cheese pulled a meltdown in the frying pan). I should have known better than to have trusted an Italian cheese to behave like paneer or at least have tested it before throwing it all in or just used the most-probably-fry-able Goya Queso Blanco, instead. But I didn't do any of these things.

I guess there is always next time but If you will excuse me, I need to go and bask in my yoga mediocrity and palak-paneer miscalculation now.

Who was Martha Graham?

I am absolutely fascinated with the Google doodle today! It just keeps getting better and better. I followed links and read so much about Martha Graham because of that awesome doodle. 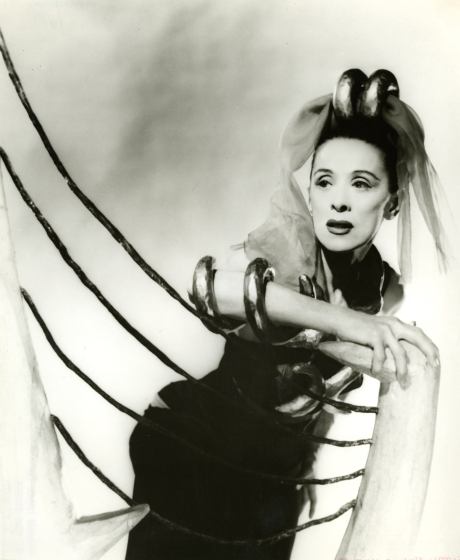 And now, the inevitable. I want to try out Modern dance!!

Saw that animation about say 10 minutes ago on Google and thought of ya but didn't follow any links......