Thinking of starting a freecycle community at Roswell...

I wish Roswell were more responsible about throwing things away in general. I have heard all the arguments about IT security etc. etc. but apart from hard disks, there is really not much security risks in freecycling peripherals. The quantity of IT-related peripherals, non-IT-related reusable "garbage" and other furniture that Roswell throws away into WNY's landfills on a regular basis is ridiculous and environmentally unconscious, especially for a cancer centre.

So I can count on you being the second member of freecycle@roswell? :-)

Ya, I wonder what the hold up is on a program for that. Maybe it just needs someone like you.

Mr. Deadlier to the rescue.

I was having a particularly dead-wall time at work today with the Roswell network dragging its amoeboid appendages, my reference-manager hanging like a choking seaweed, frequent and unexpected power outages that managed to erase my drafts several times in the morning and none of my literature searches going too well.

The straw that broke the frustrated camel's back could well have been the Inter-Library loan request form that refused to submit.

BUT, like all crazily structured bewildering films with indescribably happy endings, an (e:strip) peep came to the rescue and ironed a long-standing 8-month annoyance out.

It is time for an especially loud round of applause for (e:mrdeadlier) :-)

I told you, our team is in the "dreams come true" business here at the Roz. :)

Glad to make someone's life a little easier -- even if it was *my* app that was supplying the original lack of ease to begin with, lol.

Ah! So it was you that sent this strange email.

"(Change Request) send cc argument to sb_email as an array, not a variable"

I pushed the change into production, do I get some applause ;)

Where can I buy one of these?? 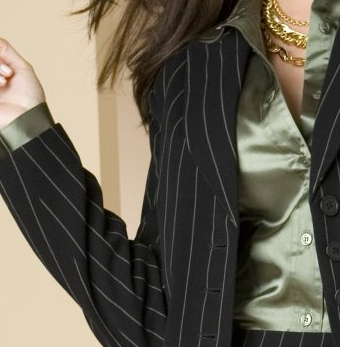 Have you seen this kind of a formal satin/silk button-down no-crazy-ruffle-frill-attachments shirt anywhere? If yes, please rack your brains - and post a clue! All the satin/silk shirts I have seen seem to have some crazy tailoring quirk. I am looking for a plain button-down one in a preferably non-candy muted colour.

Ann Taylor does sell one of those and it's for $90 in the "Clearance" section.

I have a couple like that, from Ann Taylor. And they do have a petites section- may be worth taking a look. They usuall have pretty good stuff on the sale/clearance racks, too.

I now have a blazer and trousers for the defense and almost have a shirt. I just saw this woman online and it reminded me of how well my advisor in Rochester always dresses - then I wondered if I could ever wear this kind of a shirt - because whatever I do, I end up getting dark non-feminine shirts. I am just not enough of a "girly girl" and probably will never be.

I've been pondering your sartorial concerns and have even asked several equally tiny non-plinys where they shop. Our next adventure will include several stops at stores that should have clothes that are both appropriate for dissertation defenses and properly sized. :-) Maybe they'll even have a satiny shirt like this.

A HUMONGOUS blackish dragonfly flew into our office today morning. I had the official freakout of the year. I ran out promptly, slammed the door to the corridor and shut my officemate in the office with the ginormous dragonfly. I am SO not the ideal officemate. He probably hates me now. I couldn't help it!! Metallic loud buzzing coming from a HUGE insect that FLIES is very disconcerting. I believe I was reading about genomic mutations when it made its royal loud entry through the window. I admit that the subject matter may have had some effect on the insanity level of my freakout. 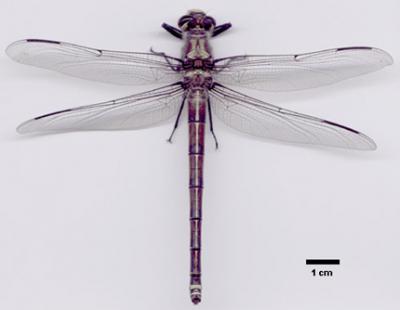 My department administrator was in the corridor for some reason and I dragged her into my office. I think I might have coerced her into climbing the table and chasing the dragonfly out the window using a yoghurt box (that smelled like some very good coffee from Guercio's, in case you were interested.)

After it left, I googled it and initially thought that it might have been the Southern Hawker (Aeshna cyanea), but a friend who saw it up close didn't notice any blue on its body or colourful markings.

OR it could be the Giant Dragonfly - Petalura gigantea. The article says that two species exist in North America. The picture above is from this page:

Or it could be this species from Malaysia - Tetragynacantha plagiata. Do you think someone brought it in their suitcase from somewhere??

It blows my mind on many levels.
a) That could have been an ENDANGERED species we chased out!!
b) It could have been a bonafide Malaysian or Australian insect!!
c) We could have caught it and donated it to the zoo/or the local insect greenhouse!!
d) Damn, that was ONE TOTALLY ridiculous officemate alienating freakout.
e) Yep. I still hate metallic buzzing flying HUGE insects. They can ONLY be one of these adjectives... NOT ALL!! That is just unfair! Arrgh.

LOL. I am so glad you were not around to witness my wimpiness and backstabbing and coercion tactics. :) I am SO not the person you seem to think I am. I am just a good liar and drama queen. Hehehe...

aww man i miss all the fun!

The just grow here. I see them around the campus now and then.

hehe... they are huge, but they don't scare me b/c they don't bite or crawl on me. sorry you were traumatized.