(e:zobar) has finished all the black in his cross-stitch pattern. It's a thing of beauty.
I did NOT get a photo of his whole costume!!! I can't believe it. i brought my camera, and then, I just didn't take it out of the bag, and I just didn't feel like taking pictures. Ugh! I am so dumb.

Anyway. (e:zobar) mentioned that he was hoping I would explain what all the Craft Nite stuff was about. So I'll explain.
My friend L and I went to high school together. I was class of '97, she was class of '98. She has always been very enthusiastically subscribed to the Girly-Girl School of Awesome. She is a fan of unicorns. She is a fan of pink things. She is a fan of glitter. She is a fan of fairies.
She is also a totally badass mathematician.
So she beads, and sews, and knits, and generally crafts her ass off.
Rewinding again-- I went to college and was class of '02. (There's a year missing. I spent it being a lesbian in Europe. Long story. Also I got mono and Bill Clinton got impeached. Not all good times but we gloss that over in memory.)
So a classmate in the Class of '02 was Dave. Not that Dave that is (e:Zobar). No, another Dave. A previous Dave. I met Dave in 1999 on his 18th birthday. He was lying on the floor moaning. "Oh dear," I said, "you poor thing, how much have you had?" I assumed the frat boys whose suite we were in had fed him too much alcohol. I assumed correctly, but in their defense, his answer was true: "Two beers," he moaned.
He's just that clumsy.
Anyway. Dave turned out to be a great friend, all four years of college. Senior year, I lived off-campus, and rented him a room in the house I was renting. L came to visit me. She and Dave decided to start dating.
Eight years later, they still are. He is a doctor. She is a teacher. Together, they do science for fun. But mostly, they craft. He's actually sort if into sewing, except that he's terrible at it. But he likes it.

So we meet up now and then, and craft things. Mostly, Dave is too tired (being a doctor is exhausting), and sits around causing trouble with (e:Zobar). L. actually knits. I bop around hyperactively and get drunk. It's a good time.
Sometimes we have other people get involved too. That's OK too. More alcohol gets consumed. It's a good time.

I was going to upload pictures but it seems not to work in Safari either. Hm. Oh well. At least I can moblog.

I have been instructed to remind (e:james) of our conversation. Just google the words roy orbison clingfilm. You won't believe what comes up. That first result is exactly what you want. And how.

Last time we had a conversation, (e:james) gave us a regrettable Google search term, so I suppose we'll just return the favor. but the really odd and shocking thing about this one is how totally not at all explicit or disturbing the stories generally are. And then there's Roy Orbison. In Clingfilm.
Yeah.

Anyway.
Z informs me that I owe y'all a better post about the Craft Nites, but I have to leave for work in five minutes and am waiting for my jeans to come out of the dryer, so I can't go into it just now.

Also I have a crushing sinus headache this morning, but no flu. Awesome.

Great party last night! I just wish I didn't have to work at 9 am!!
Jesus has not yet risen in this house and I think I won't wake him before I go.

I wish I could remember what I had you google. But Roy tops it all!

That roy orbison in cling film thing is so insane.

i don't have flu after all

So I don't have a costume for me. I figured I'd be so sick I would either have to stay home, or would just curl up in a corner of the party and try not to breathe on anything, while Z went forth and radiated his awesome.
But I woke up this morning and I feel mostly OK. I mean, not fantastic, but OK. So I won't be calling into work and I won't be missing the party.

But I don't have a costume.

Oh well, I'll think of something. :( Not the awesome thing I'd thought of, but something easier. Boo. 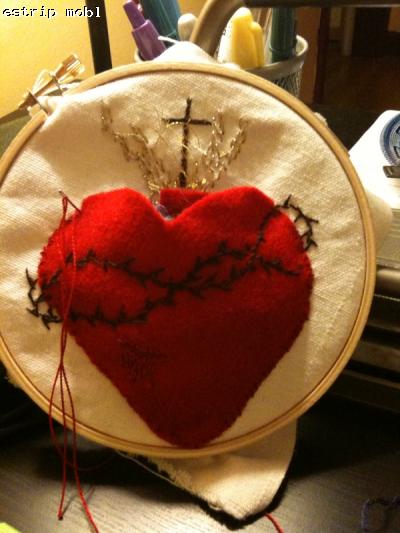 Wow, I missed all of this awesomeness!

Looking forward to it! Congrats on mobl posting!

I know! I know!! I'm the scared dude from Indiana Jones and the Temple of Doom.

I dunno! Can't wait to see. We Nordics grew up Protestant.

Aw come on isn't anybody old-skool Catholic in this piece? Or is (e:zobar) going to be explaining himself all night?
Well, no, once it's in place on the costume I am positive it will make perfect sense. 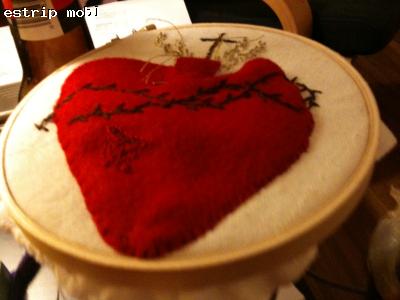 So can you guess what it is? It's a small part of the whole thing, but very labor-intensive. :)

Ooh good one!
But no. The Holy Hand Grenade basically looks like a bottle of Chambord. I should try to get a clearer shot of this one, though-- this isn't showing the shape all that well.

He is a monty-python knight, and that is the holy hand grenade?

My boss's kids had H1N1 last week. His wife had it as well. It made his older daughter (7) pretty sick, and his wife was miserable, but it only slowed the 3-year-old slightly. (The 3-year-old has the attitude and constitution of a Mack truck. She is the kind of child who puts her Tonka trucks onto the coffee table, and then pushes the coffee table around the room making vroom-vroom noises.)
Monday one of the clerks I work with (and indeed had spent Sunday's shift with) came in and was promptly dismissed as too sick to work. His girlfriend had spent the previous week miserable, probably with H1N1. He'd felt under the weather and had been obsessively using hand sanitizer for several days. I'd worked with him for most of those days.
Monday the boss went home at his normal quitting time, which is uncharacteristic. He normally stays at least an hour late, usually two.
Tuesday he came in and instructed everyone to keep their distance, as he certainly was suffering with the flu. He wound up staying several hours, and while he was careful to maintain distance from everyone and sanitize his hands frequently and not use the same telephone as anyone else, he still was there in a small room with everyone.

We expect to lose most of the rest of the store staff at some point, but hopefully not all at the same time. There are only five clerks, so there aren't a lot of people able to cover for one another.

I've just had 2 days off in a row, counting today. I have felt a little under the weather, intermittently, all autumn, but have been able to dismiss it as allergies. But now I really don't feel quite right-- my ability to regulate my body temperature is off, my chest is tight, my head is fuzzy, and my throat is sore. So I'm probably coming down with something.

Should we lay bets on whether it's the H1N1?