If you type "dragonla" into the search box above "Read The Latest" it suggests "visit dragonfire1024's journal". Even if you type my whole name in, it never suggests me; that other dragon person stays there. I am terribly insulted. I guess it's because I am after him alphabetically. (I don't really know this other person so I am not making any comments upon his character.)

I am gearing up for National Novel Writing Month

. It'll be my fourth or fifth year doing it. I win every year, not that it's difficult... I mean, it is, but, a lot of people manage to do it.
I always mean to get to more of the local meetups than I do. I have been meaning for two years now to find a local writing group. I need some kid of feedback on my writing, the closer I get to being publication-ready, and while I know there are several groups like that in Buffalo, I have yet to actually get out and find any.
I blame working nights.


My iSight doesn't seem to be working today. I leave you instead with a better picture of (e:zobar) (not by much), taken with me in a bar one night. Why did I have my laptop in a bar? It is best not to wonder too hard. Trust me, it made sense at the time. 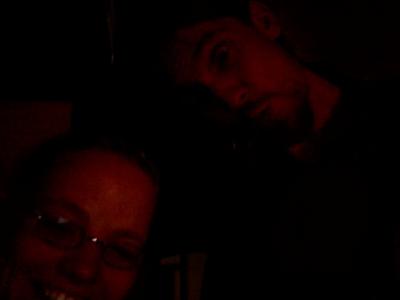 Yesterday after I posted, (e:zobar) and I sat for like an hour in our living room, just instant-messaging photos of ourselves as we sat there taking them with our iSights. It's sort of disgusting that we have twin Macbooks but it's also darned amusing.

He sent me this: 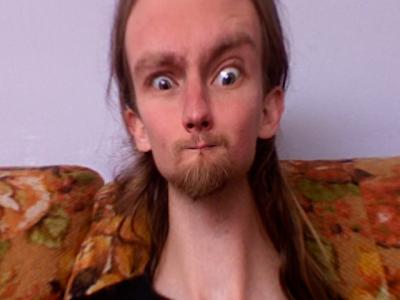 And I retaliated with this: 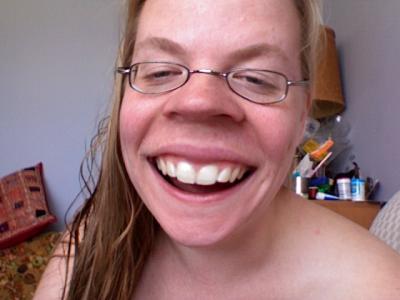 It's good to know that technology is being put to constructive use, making the world a better place and all that.

I also took this picture of myself: I am holding my camera because I took pictures of Z making faces at his laptop. Those are still on the camera, though. 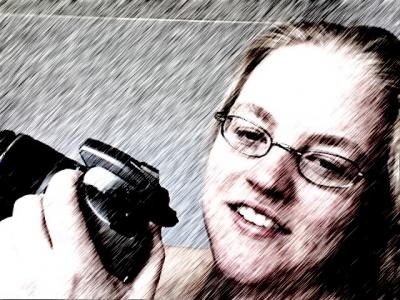 I spent a lot of yesterday laughing so hard that my abdominal muscles hurt today. Which is always a sign of a good weekend.

I really like the built-in webcam on my new Macbook. It's sort of stupid, and sort of vain, but I really like to just take pictures of myself with it. So I was joking that I should start putting them up on my blog. And I thought, hey wait, that would probably be a good way to remind me to update my estrip blog. I can never think of anything to write on here that I haven't already gone on and on about on LJ already, and so instead I'll just do some kind of, er, modern performance art piece by posting the grainy photos of dumb faces I make at my camera every day. :) Good for me.


I also wanted to post to ask if anyone's throwing a Halloween party this year. Because I kind of wanted to host one, but my house is really tiny, and also if someone awesome is having one, I don't want to deny myself the chance to go to their awesome party because I'm too busy hosting my own lame tiny one.

But if nobody's hosting a party, then I'll totally throw one here and we can see how many people (e:zobar) and I can fit into our tiny house.


edit: Duh, I forgot to post the photo of myself that I was talking about. *goes to choose a good one* 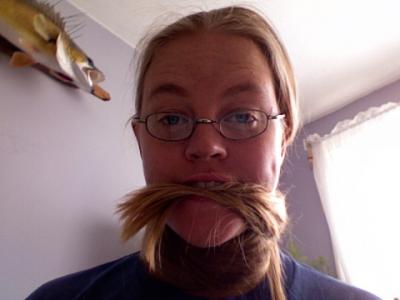 That's me before I got my hair cut on Friday.
And the bonus round:
After my hair cut. :) 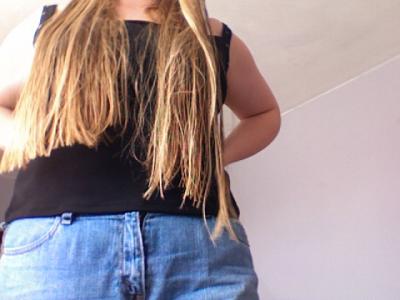 I Know (e:ladycroft) is having a Halloween party on Fri Oct. 27th but other then that I'm not sure if anyone else is having one.

Uhm... did you say the bottom one is AFTER your haircut?? Hmm... if you paid for it, you seriously need to ask for your money back. It's kinda uneven.

Oh dear, I am scatterbrained. I know what i was going to post about. (e:chico) was asking me about my novel/novels etc., and I thought, oh yes, I should link to them from here.

I just posted the opening scene of my current almost-finished novel (it's done, just in the editing process) to my livejournal, so I should link to that. The post is here:

And it's explained there. So if you're curious, that's what I'm writing. :)

Is kooks ok? Why did he go outside? His clothes were all gritty like he'd been rolling around in the dirt. Poor child, I hope he's not completely destroyed this morning.

My brownies were a hit but I lost the baking pan I brought them in... I meant to write my name on it but I didn't. If anyone sees a 9x13" metal baking pan with square corners, I would actually kind of like it back.

I don't envy y'all the mess the kitchen must be. I did do my best to pick up all the beer bottles at least-- I rinsed most of them out, too...

What a party! What a house! I am so thoroughly jealous of your awesome huge house, PMT!
I really am going to ask Jeff from Apollo Construction Co. about solar panels and the like, though. You so totally could pimp out your house with weird eco-friendly features.

(Last night I mentioned to (e:paul) that he could put solar panels up on the roof and he said, Is it sunny enough in Buffalo? Last year about this time I wrote a cover story for Artvoice about energy conservation during heating season, and one of my major sources for the article was a dude named Jeff Brennan who is a contractor specializing in ecologically-friendly renovations-- he was a fascinating fellow and I still harbor the fantasy of making over my house into a much more efficient and fossil-fuel-conserving haven. Anyhow. I digress.)

(The basement totally needs to be the Visco Disco. Also, it needs a foosball table. Where does one find such things?)

(And you should totally make a jungle room upstairs and grow all kinds of plants there. Paul, did the plant I gave you ever get taken out of its box? Poor little guy might be getting claustrophobic in there.)

(e:twisted), it was fun to meet you and you totally reminded me of somebody I can't remember who. Somebody awesome though, so don't worry.

What's really funny, and I think I've observed this before, is that my livejournal entries are always more organized and my (e:strip) ones are always way scattered. Hmm. Perhaps I will go and ease my hangover a bit first.

Shit! I just realized I'm missing the first league meeting for rollergirls! But I was in no state to cope this morning. Oops. I'll have to hope they post the minutes online later. Durr.

Nothing to be embarrassed about, (e:Kookcity) ... you had your wits about you enough to thank me for the bucket i gave you between puking and passing out. You were fortunte enough to not get spanked with the spoon too much... now, that was embarassing!

I return your hijacked journal to you, (e:Dragonlady7) !

Oh good, my baking pan didn't die. I meant to use one of those ones that's disposable just so there wouldn't be a hassle, but I'm not so good with the pre-planning.

Jeff Brennan's company used to be Apollo Construction but now I guess it's called Elmwood Village Remodeling. :::link::: I'm going to shoot him an email, I think. Don't know if I have his number anymore but the contact info's on the webpage as well. :) On the one hand, there's only so much you can do with a house of that size-- it's just going to be expensive to heat no matter what-- but on the other hand, since the house is so big, you can do massive improvements to it and really make a difference. Is what I'm anticipating, anyway. Jeff's a fascinating guy, and is really passionate about both energy conservation and Buffalo's historic buildings.

in re: Kooks: He just got pretty drunk, and was wandering around with this big jug of "grog"-- cider and rum, as far as I could tell. He was offering it to people, and out of concern at his state of intoxication I tried to subtly take the remaining grog away from him, but all I got him to do was pour it out into a saucepan. This worked for a moment, as he wandered off and left the saucepan, but then he came back and started drinking from the saucepan instead, which rather negated the point of taking the jug away. Oh well. He got very drunk, acted very sweet, and then wandered off. After a while of nobody seeing him, we got concerned, because he really was in no state to be by himself. Someone pointed out that he'd gone down towards the basement, and we thought Dear God, he's lost down there. (It's a big basement.). But we found him just outside the back door instead, where he'd lain down in the dirt and gotten very wet. When I asked if he was OK, he said yes, but he was kind of wet and kind of wanted to be less wet. So we took him inside and I think (e:leetee) put him to bed. He may have vomited but only a small amount, and not very messily-- leetee got him a bucket and all was well.

So no, Kook, you didn't misbehave at all. In fact you were very sweet. But very drunk. So I imagine you may have some kind of headache today.

oh that is kind of embarassing

I know he was trashed and walking around with a pan filled with some kind of alcohol on his head. He poured out his personal bottle into the pan and drank from the pan and asking if anyone wanted grog. Here is where the rumors come in I heard someone took him up to bed and laid him down. I heard that he was passed out on the grass not sure I also herd he may have spewed all over the place but I'm not really sure I guess someone should ask him what happendend.

I'm ok but I lost my jug

This morning I was prepared to be embarassed but I guess I didn't do anything bad. (based on what people said)

ditto on the "awesome house/ I'm jealous" bit. But I must have missed some scandal- why all those posts about kook going missing? What happened?! Do tell!

pan is accounted for and currently being "pots and panned" in the dishwasher. It shall sparkle for its eventual homecoming. I spose you must visit again to retrieve it...

Wasn't even involved in the solar panel/eco-friendly construction conversation but am totally interested, please do disclose the number of said contractor.

And thanks for coming.

Thank you all you beautiful people for making my prom night special.