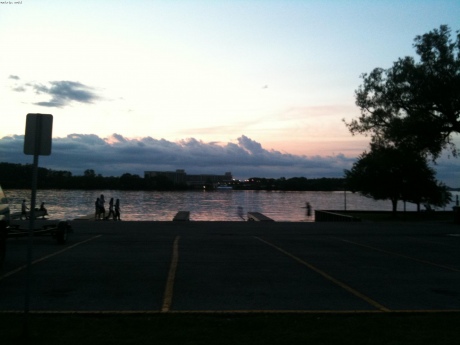 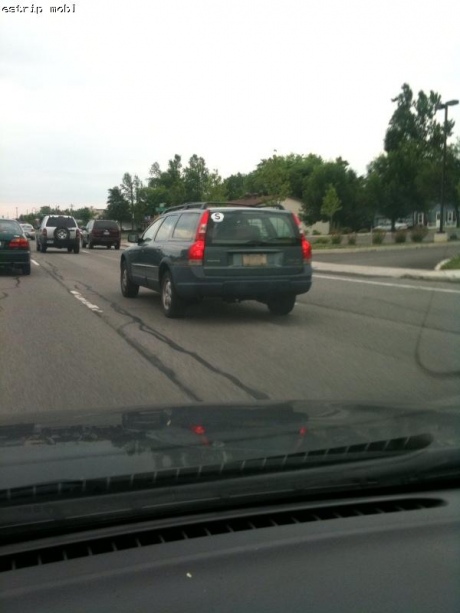 Yes.
This.
This is the stupidest sticker ever.
I know you can't read it. That's why it's so fucking stupid.

Guhh. Phone sort of fixed, we'll see. But that's the picture, which I risked life and limb to get.

Yeah I'm not done with the iPhone but I'm not a huge Apple fangirl either. I'm just glad other people are doing worthwhile things. For a very long time if you cared about things being cool but didn't have the patience to hand-craft it, you kinda had to go with Apple stuff. Now other organizations have kind of caught on to that whole concept, so I'm glad.

I just wish everyone in the world didn't have the same ringtone as me.

I take it the phone is fixed. If nit the moblogging experience on android is better. Maybe it was mother nature telling you to switch.

I killed my iPhone. I don't know how. It's less than a year old. I saw the stupidest sticker ever on a car, and took its picture, risking life and limb I know, but I had to document it. I got to work, and emailed the picture here to moblog it.
Walked away leaving my phone on the counter to finish sending the email. Came back and looked on my computer to see whether the photo had uploaded. It hadn't. Picked up my phone to see if there was a reason why not.
Couldn't wake the phone.
Tried restarting it. Nothing. Tried hooking it up to the computer. Nothing. Nothing. Nothing. It's totally dead. If I plug it into the computer, after about 3 minutes iTunes pops up a message saying that it could not communicate with the iPhoneTM because of an error reading the device.
Fuckers!

Anyway. So i'm non-moblogging, sans picture, the stupidest sticker I've ever seen.
You know those really stupid oval stickers, that have acronyms in them? They come from the EU, right, and you put your country code in them, right, only Americans for some reason think they're so cool that they need to have one for every possible thing. And they don't make any sense-- what the fuck does OBX stand for? What about SJCI? (I see stickers for both of those every day.) So since the codes don't mean anything, they have to defeat their whole purpose by writing, in tiny lettering, at the lower border of the sticker, what the cryptic acronym stands for.
Again, missing the point of the whole exercise.
(It was cool, for like, a second, in 1997, to have the country code sticker of a country you admired. I thought that was kind of neat. Between 8:15:36 and 8:15:37 am on November 13th, 1997. Really. Then I was like, "Actually that's kind of pretentious and stupid. Without even being at least arguably intelligence-requiring like some pretentious things are. So it's the worst of both worlds. Never mind, those things suck and they irritate me." And my opinion hasn't changed in over a decade. Even after having been to the European Union, where they make sense and are functional.)

So this was one of those stickers.
Know what it said?
"S". That's all it said. That was the acronym. One letter.
I was like, "What the fuck does S stand for?" Because it's not a country code. And guess what. This is English. A shit-ton of words start with S. It's one of the more common letters, in fact.
So I drove up a little closer.
Underneath, it said, and I'm not making this up,
"See Europe In A Volvo." Only in block caps, and tiny.

For fucking serious.
That is the dumbest thing I've ever seen in my whole life, I think. And I just had to share it with all of you.
I used to sort of think maybe Volvos were cool. Like, they're functional luxury cars. I can kind of dig that.
But now I've lost patience with them.

Also I think it's about time I stopped working in Williamsville, because people like that are my customers and really????? Ugh.

Yeah, I'm pretty much with you. Like I thought they were cool before they were cool. Now that they're 'cool', I'm way too cool to think they're cool anymore. ;)

I always thought they were 'euro' stickers too, like "IRL" or whatever. But then someone, my brother I think, said they're actually airport codes...

so he thinks he's pretty cool now because instead of having the "NPT" sticker for Newport, RI (that all the tourists have) he has one that says "UUU" which, apparently, is the airport code for newport's little tiny non-commercial airport.

I know what the abbreviations mean, because I read the explanations at the bottom of the sticker. I just think it's totally stupid, because the point is that it's an abbreviation of a universal thing that everyone knows what it is, so you can have a very simple sticker, but then you make one for every goddamn thing under the sun so you have to explain them-- it's like, the entire point is being missed.
If you're so proud of your neighborhood, why not have a sticker that says "Elmwood Village" on it? Or "Outer Banks, South Carolina"!
I stand by my assertion that these stickers are really dumb, and the one I saw yesterday is the dumbest. And then! I saw it again today! Bitch has my same commute! Argh!

It's not a suburban thing, there are tons of people with the EV sticker for the Elmwood Village.

Really at the end of the day it's just people showing civic pride for their neighborhood or vacation spot.