I am now able to confidently go in and make a completely whole wheat improvised bread with whatever without any recipes from scratch. And, more importantly eat the results without cringing or wishing I hadn't made the colossal mess. I know I said this already zillion moons back here: (e:tinypliny,53247) But that was banana bread. This is THE staple everyday bread bread.

I think that is progress.

Only, it's progress in the words of a frog in that arithmetic problem, you know, the one that lives in a slimy well and jumps up 4 steps to fall back 3.

And you can now cite tweets.

I am sorely tempted to include one in my thesis:

For a research Paper... Seems odd but as long as the source was good......

You know your tea addiction has gone a bit far when:

SCOOOOOOORRRREEEEESSSS!
Any 5 and you are one.
Any 7? have you taken the teaddiction test lately?
Any 10? Hmm.. and how does that make you feel?
Any 12? Have you put the kettle on yet?

I would gladly drink tea with you... Make an appearance march 21st-25.

Finally, a balanced meal that took 1/2 hour after weeks of eating 3-4 minute meals. 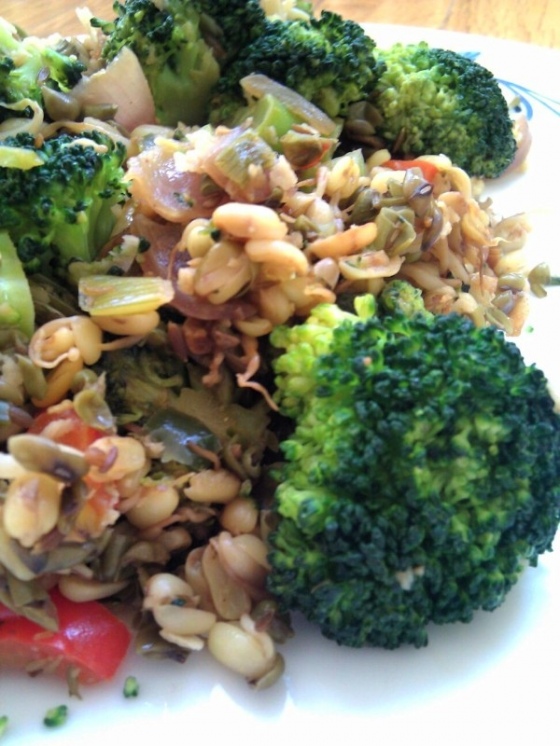 I used to hate that actress who is all teeth.. but not anymore. Tarsem has done it again. Made me want to actually see this movie.

That looks great... Disney Is going to be Pissed!!!!!!!!!!!!!!!! Someone is Changing the story they Made Famous and it isn't Them... WARRRRRRRRRRRRRRRRRRR!!! Well maybe they do have something to do with this... Well the old Disney would hate this... Think now that they own Pixar (yes many can make the claim all there movies are way better then disney Fair Tales).. They don't take them selves so seriously two examples are the Movie Enchanted.... That movie is great if you have never seen it.... And the Series (Not sure if they make it but it is on there net work and it is a different take on the Fairy Tales in real life relm)... Once upon a time... Or maybe it is all The Simpsons and Shrek bashing of Disney ?

There is another snow white movie that I haven't looked into yet called Snow White and the Huntsmen.......

The cherry tree in 3D gory?

I really want the soundtrack!!!!

That is so crazy but I kind of want to see it.

WINNING!!!!!!!!!!!!!!!!!!!!! Kidding couple months back I saw a poster for this at the movies but it was tough finding stuff on line... About the movie if what I remember is correct this was a book and the person whom wrote it worked on the movie with Burton.... Now this could mean it is just like the book and just Burton's Visual style or it could mean it is all Burton and the Author is just there to make sure the facts in book stay the same... AKA the story doesn't change and keeps the heart of the book...?

NSAIDS are not exactly good for you.

I keep hearing about how NSAIDs are projected as the next big thing for preventing cancer in combination with other drugs/supplements. I find it odd that it conflicts so directly with my background information from medicine and actual medical practice.

It's fine and all that we are desperate to find cures for cancer but it's also time to stop and think about what we know from the clinics. Do I think that people should start taking low dose aspirins (an NSAID) willy nilly because it might, at some vague point in the future, reduce their chances of cancer? In all good faith, I cannot support this view.

NSAIDs are no friends of your gastric lining. Doctors have known this for ages. They have the potential to induce gastric lining damage. Late last year, a study threw some light on the prospective dangers of chronic NSAID use (yes, not even abuse. I said, regular use.)

The study has been running for several years and women in the study fill out questionnaires and mail it back at regular intervals. The researchers looked at spans of use and followed up on these women, including who ended up with cancer and who didn't. They found that women who reported taking more NSAIDs in their daily life over several years were more likely to be diagnosed with renal cancer.

Why doesn't this surprise me? All that we know about the "good effects" of NSAIDS come from cross-sectional studies that take a snapshot of a section of population at any given time, ask them what they are eating and what disease they have. They are poor representations of what happens to our bodies over a long time. NSAIDs, among several other drugs are metabolized through our livers and kidneys - two main excretory organ networks in vertebrate living systems. Thus, long term use are more likely to impact these organs.

So short term or acute doses could damage your gastric lining. Long term use impacts your kidneys and livers. Do we still want to push this "golden drug" beyond the very rare as-and-only-when-really-really-needed basis? I think it's short-sighted at best. Sometimes, it's important to make reality-checks with medicine. In this particular situation, I don't see any of that essential precautionary measure.

Maybe you should try that and document the results just in case that is the next big thing to do to prevent cancer.

What if you crush and snort them or just shoot em up? Just kidding.

The constantly dragging workload and grey skies are getting to me. What I need is this happy song from Boney M to pick me up and accelerate on my work so I can clear some more hurdles (read: chapters).


Lay your problems on the floor, clap your hands and sing once more.

For a LOOOOONG boot-up time. Seriously, I could put the kettle on and have it reach a boil, or be halfway on my way to my office by the time the login screen comes up.


Why on earth does the sendmail service need to run? I don't even run a mail server.

hey, I am not messing with anything right now. Some recent updates have not been so great. Gnome Shell keeps consuming memory till it reaches 2GB or more after a few hours and it brings everything to its knees. I found out that my Wacom tablet not functioning is not the fault of the stylus or the tablet but because of some crazy stuff that gnome-shell is doing - probably being a memory whore.

Anyway, the point of all that is rebooting solves several issues. It clears up the memory once more, the stylus works once more, R does not crawl etc. But of course then I have to face a 2 min boot sequence.

I am going to just take your advice and not do anything. But yeah, instead of messing with the system, I actually think I am going back to vanilla ubuntu after I am done for good.

You can turn off sendmail but I wouldn't start messing with your machine services right now. Just live through the 60 seconds boot time until you dissertation is done. Otherwise, you are bound to fuck it up and have way more downtime. Here is a great overview of working with systemd :::link:::

I lied mine says it took 50 seconds, I swear its faster than that. Maybe the last boot was slow, I did have a kernel update.

you can disable whatever services you dont want. This is even more interesting systemd-analyze plot > graph1.svg

That is so crazy. My system boots in like 10 seconds. Maybe its worth investing in an SSD.

And in the category of weird business names, I got this email today:

Like in a wild hyena laugh? What does bargain-hunting have in common with hyenas? Is that supposed to be a riddle? I know I can follow the links on that email and read the back-story and all that in the time it has taken me to write this out here. But really, first impressions are the worst and the most fun.