how can you become a demented zombie?

ok, so this is the stuff that they tell pregnant women about when dealing with cats and kitty litter. apparently this parasite likes to hang out in rat brains, but can only complete it's life cycle in a cat. so when the rat becomes infected with it, it's behavior changes and the rat loses it's natural fear of cats, and starts hanging out in front of cats where it most likely ends up being eaten; allowing the parasite to continue it's life cycle.

here is where it gets weird and kind of scary.

"Given that human and rat brains have a lot of similarities (they share the same basic anatomy and use the same neurotransmitters), a question naturally arose: if Toxoplasma can alter the behavior of a rat, could it alter a human?"

"Parasitologist Jaroslav Flegr of Charles University in Prague administered psychological questionnaires to people infected with Toxoplasma and controls. Those infected, he found, show a small, but statistically significant, tendency to be more self-reproaching and insecure. Paradoxically, infected women, on average, tend to be more outgoing and warmhearted than controls, while infected men tend to be more jealous and suspicious."

"E. Fuller Torrey of the Stanley Medical Research Institute in Bethesda, Maryland. Torrey and his colleagues had noticed some intriguing links between Toxoplasma and schizophrenia. Infection with the parasite has been associated with damage to a certain class of neurons (astrocytes). So has schizophrenia. Pregnant women with high levels of Toxoplasma antibodies in their blood were more likely to give birth to children who would later develop schizophrenia."

"A year later, Torrey and his colleagues discovered one more fascinating link. They raised human cells in Petri dishes and infected them with Toxoplasma. Then they dosed the cells with a variety of drugs used to treat schizophrenia. Several of the drugs--most notably haloperidol--blocked the growth of the parasite."

btw, it is estimated that about 3 billion people around the world are infected with this parasite. i'm guessing the majority in developing countries.

i would like to have a little bit of this parasite, so that i could be a little more warm and fuzzy and talkative without the help of some kind of alcohol or drug.

you can find the entire article here.

are you being mean? why?

I love you so much for posting this. It has made my day, NAY! My life so much richer for reading it.

When I worked for PETsMART (evil) they refused to take back kitty litter pans for return because of the possibility of someone who was pregnant of HIV positive coming into contact with them. At the time they sold these self cleaning ones for $100 and all you had to say was that you ordered one and it didn't work and we would send a new one without taking back the old one. For some customers we sent several $100 units never asking them for the old ones back. This obviously is an attractive policy to scammers. Now you could just do that and sell them on ebay if you were corrupt enough.

First of all I'm glad to see you posting again. Secondly very interesting (but I didn't read the article). 3rd wouldn't having the parasite kinda be the same thing as the drug and you would depend on that just instead of the drug. I'm guessing it wouldn't have the same bad effects drugs can have. In any event I know this post wasn't about the party but it was nice to see you there.

this is what you do when your kid wont stay still..... 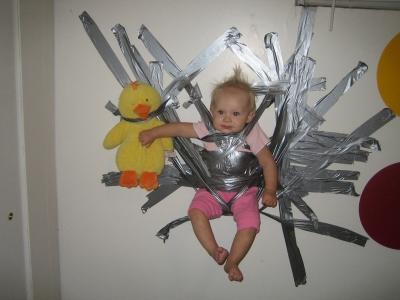 Given all the lead baby items coming out of China, duct tape's probably a lot of safer.

hehe, I wish I had a picture of it, but there's this coathook in my parents' kitchen, where my mom hangs her purse... and my dad would hang us there by our oshkosh straps.

In the role playing world this is known as boffer parenting.

If anyone gets that joke, I love you

Thats great. Its was awful nice to include the ducky for comfort.