When its put in the context that he's just starting his freshman year of college and I've just graduated...to me, is a little weird. Well weird for me, probably not for him. haha.

I also felt bad because my friend I was there with likes him. Therefore, she was trying to talk to him a lot and I was trying to keep it cool and not dominate the conversation. A move that seems to have backfired. crap.

Why is it that the people you don't want to see never seem to really leave your life. I just learned yesterday that this kid I went to college with, a gentleman I am not too fond of, just moved onto my street. Granted, I live on Richmond which is a fairly long street. But knowing my luck with this kid always being in my life, he probably moved in directly across the street. It's a good thing (e:MK)'s friend Lindsay already got the studio in our house, otherwise who knows with my luck, he probably wouldve moved in. Good times. He's not like a terrible guy, he just makes me nervous and he's kind of a D.

My kitty had surgery the other day and the techs at the vet wanted to keep him...basically because he's the cutest and most dog-like cat I've ever met. KITTY!!!

Perching on his balcony harness, leash and all. 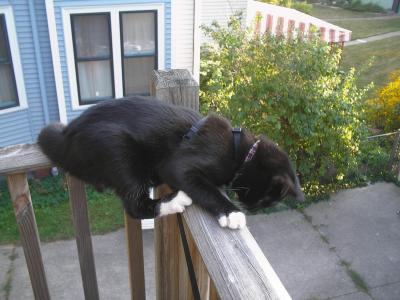 he likes to climb 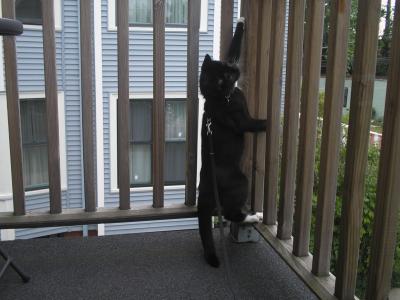 "his"laundry basket that sits next to mommy's computer

A "D" is short for Dick. (e:MK) and I always shorten things to their first letter. We're really C.

Oh and I forgot, this post reminds me to recommend the Michelle Pfeifer movie "I could never be your woman". :)

actually, the whole reason he has the harness is that it only goes around his chest so there's no strain on his neck. his collar is one of those CatSafe ones that come apart if they get caught on something. He has fallen once, but the harness kept him up there so he just climbed back up.

aww cute! he looks like a smaller version of mine. but i must ask, is it necessary he stays on the harness? I understand he is a kitten and perhaps more prone to clumsiness, but both of my (adult) cats go out on our balcony and have shown little to no interest in jumping off, and I am also afraid for your kitty if it were to perhaps do so, and strangle itself :(