I love the song "Just Around the Riverbend". Who's with me?!!

So school is ending soon, I'm not thrilled about this fact. Still have no concrete plan for the fall. There are a few jobs I've applied for but so far nada. That's ok, it should be a sign.

The Stage Managment Grad School thing is not going to happen. Not because I didn't get in anywhere, but because I don't want to do it. I've missed the deadlines for a lot of schools but I've decided what I want to go for. I'm going to get my master's in Theatre Education. I finally feel good about something int he future.

I have a bad habit of denying myself things I know that I will want and will make me happy for shitty reasons. Since I was 10 I knew I wanted to be a teacher and I know I'll be good at it. I don't want to sound conceited, but it's true.

The schools that caught my attention are Boston University at Virginia Commonwealth University. There are a couple others, but those two seem like I'd fit into their program well, apparently SUNY Albany has a program, that's just random.

I almost cracked and broke my "no more shows this semester rule", but then what honestly made me change my mind was the mental image I had of Amie shaking her head in disappointment and I said no. Haha.


I head to 'bama in 3 weeks for my cousin's wedding. She just emailed me while I was writing this entry to ask me to be the guestbook attendant, all I can think about is the episode of Sex & The City where Miranda has that job at someone's wedding. I can't even remember whose, Charlotte's?

I should really start packing my room and cleaning it. Its such a disaster. I've been here 2 years and have accumulated that much junk. Awesome.

Heh - I've actually got a friend who works at VCU.

If you do end up going there, Richmond is a pretty nice town. It's not Boston or anything, but it's not bad.

haha i jsut watched the eddie izzard standup where he talks about kennedy saying that.

you're a donut? i just had this talk with my relatives before i left germany, hahaha. 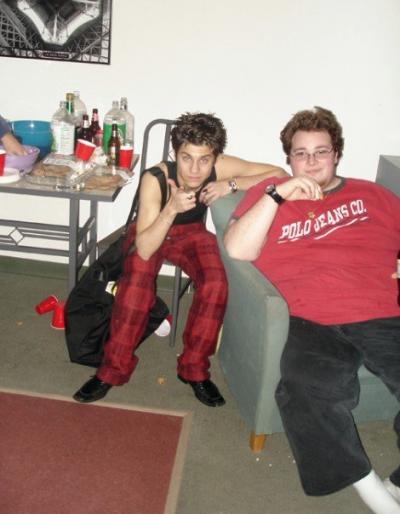