Ok for those who don't know I'm obsessed with the Sabres and hockey in general. I've always liked hockey but this season without shows to work on or homework to do, its reached fanatical status. If I like something I become obsessed. Ok I don't become obsessed with people I meet but teams, celebrities, things and people I will probably not come into contact with. As there is a distinct possibility I could one day meet some of the Sabres, I choose to abstain from becoming obsessed with them as individuals and choose to know their stats and possibly where they were born and thats about it. I don't generally care to know if they're married or have a girlfriend or if they have children.

Ok so we recently beat the Flyers in 2 games in 2 nights. I decided to peruse the Flyers website only to discover this:

Ok so no matter how many times I attempt to link to the video it doesn't work, so if you really feel motivated go to the Flyer's website and find it.

Its just them reading Twas the Night Before Christmas. It's so awkwardly funny and especially Marty Biron (for those who don't know he's the 4th to read and the Sabres former goaltender) He has the greatest accent. And then, because they like dangling him out in front of the media, Daniel Briere gets the very last line of the story. Oh man I laughed a lot at this. Especially the ridiculous santa hats they're all wearing. Enjoy. 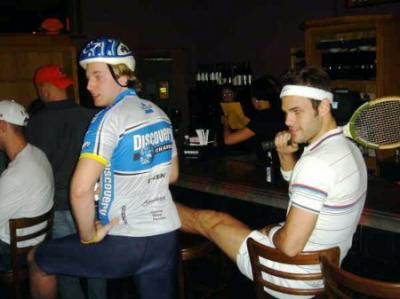 The guy dressed as John McEnroe circa 1981 is Paul Gaustad, highest penalized player on the team thus far and resident SabreHottie, (check out those thigh muscles). The gent on the left is the hope and future of the Buffalo Sabres (as his contract length and amount would indicate). Yes, kiddie bike helmet and all, this is the future of the Buffalo Sabres, #26, Thomas Vanek.

hehe- I just went to my first game this season, and someone held up a sign that said "Don't Panic! Here come Vanek!" I thought it was cute.

Hollywood is really stretching it with these "based on a true story black people against the white people inspirational teacher takes rag-tag group of teens and turns them into lean mean school-sactioned team activity playing machines" the latest one I just saw a commercial for is that highly competitive, all the kids want to be the captain of..........the debate team...in what appears to be the 1940s or 1950s. 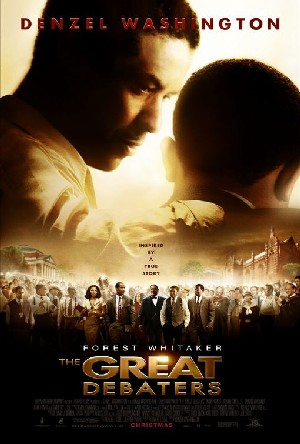 produced by Oprah, staring Denzel and Forest Whitaker. And that girl who played Michelle Tanner's friend Denise on Full House. Hopefully its better than We Are Marshall which bizombed. It also stars Denzel who helmed one of the greatest high school sports team movies of all time "Remember the Titans". Yesssss

Minority students are most often poor students or go to a poorly funded school.

If you want to see the poorest, worst performing school in a district, go to the one named after Dr. Martin Luther King. It is really sad that segregation still exists in this way. And cutesy little stories about some intrepid teacher who inspires a class of poor students to excel just seem maudlin and disingenuous.

HA! I am not 100% sure what this movie is even about. I just read Anne's description and it pushed one of my buttons. ^_^

And Peter, I can't tell if I am being for real or sarcastic most of the time. ^_~

I would assume that (e:james) is very sarcastic if not cynical...not in a bad sense. Anyways, the truth is minorities are at a disadvantage statistically, but by being provided with less from the very start contributes to the historical gap in education and economic status in a profound way. I don't even know if that makes sense. All that being said Anne, that movie looks bad.

First of all (e:james) I can never tell if you are being real or sarcastic in your comments. But that being said I think these movies to try and remind people that instead of having kids in high school, or droping out to sell drugs. Kids should try hard to stay in shcool and make a better life for them selves. The civil rights movement ended and schools got intergrated but things still aren't close to even. The poor not the black or white kids still get the worset education. I think that the Mega rich hold down the poor and if that means most of them are black also, so be it. I did hear a comedian say about the one about the swim team "Don't waste your time watching it they all drown". Seriously though even if the movie is Bad Denzel will do a great job in it like he does in all his movies. I think this one might have a chance to be good cause it won't be about some guy from a bad hood getting a chance. It will be about someone or some people who can talk and argue and are smart and deserve to be taken seriously. That being said I'm skipping it.

I have a feeling rich white men are behind these movies.

They want to tell poor minority students in crumbling underfunded schools that they can do great things if they just try harder. Rather than, you know, giving them the same resources well to do white kids have. If they fail, don't win the big game, don't get into Harvard, well... it is because they didn't try enough.