Whenever the people in the office are irritating you, remember that you saw this -

The pleasure is all mine.

I'm going to burst into tears!!

pretty sure josh posted it...

Jason, I love you for postin that!

She is radicalizing the San Rio work force for revolution comrade! 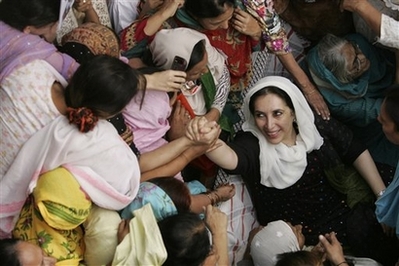 Seeing this sort of thing deeply saddens me. Despite her somewhat seedy and allegedly corrupt past she had the important things right, and for a country that needs an inspirational anchor I'm afraid that they've now lost their anchor. I'm also afraid of a catastrophic, violent, extremely bloody backlash occurring as a result of this assassination. We have a satellite office in Pakistan and I worry about the safety of our colleagues there. This is a terrible event.

I have very mixed feelings about this. It is of course sad that anyone should be murdered (not to mention the other people killed in the attack today and the 100+ at the other assassination attempt a few months ago). But there is so much uncertainty in Pakistan and this just compounds it.

The auditing gods (and my boss) have smiled upon me - three audits popped up within San Fransisco to be completed and the company is going to send me, starting ideally on the 7th of January. Given that everything works in my favor, I'll likely be in San Fransisco starting the weekend after New Year's Day to sample the local flavors before I actually have to work.

If all audits are within San Fran city limits I am wondering if its wise at all to rent a car. I suppose I won't really know until I see the exact location of the facilities I will visit, but if its easier/less of a hassle to get around using public transport I'd really like to know where I could find a resource about the public transportation system. Gimme some pro's/con's. I'm told San Fran is only second to NYC in terms of population density, so I am assuming that taking a car around SF is a major hassle.

In either case I'm looking forward to visiting my friends there, since they just announced their engagement. How sweet of an opportunity is it to be able to congratulate them and take them out for a drink in person?

This site :::link::: will answer your question.

Parking is terrible in the City. Avoid renting a car if you can.

I forgot about the ELF - they strike like shaggy haired ninjas.

If you do rent a car, don't make it an SUV - that mofo may just end up in flames.

Canada has the fucking bomb candy. Before I get into that however, I have to mention something. I had to go to Brampton, aka Bramladesh, on Tuesday for a day trip and before I crossed back over I stopped into the duty free. Guys, if you didn't know, they now sell bottles of absinthe for 69 bucks a liter - I couldn't believe it! I had to know if this was legal so I asked an employee. Apparently this stuff may have less of the wormwood in it, but as always and to sneak in a weed analogy, you better smoke the schwag when you can't get your hands on the sticky shit. In any case, this is apparently a totally legal brand to bring over the border after visiting the duty free... if you are so inclined.

What shouldn't be legal, however, is the ridiculous assortment of alcoholic chocolate that they stock in there. I brought back a 100g Swiss Grand Marnier truffle bar. Its enough to make a grown man cry my friends. This stuff is like individual bits of chocolate glory. If glory could be made into candy, it would be like this. I also saw some Cuervo stuff, various Canadian maple candies, other truffle bars including Mumm, Jack Daniels and a thousand other things. I didn't see any Kinder bars, which was total bullshit. They had a candy bar called Mr. Big, which was literally the size of my forearm. I can't figure out why it is that Canadians don't have teeth rotting out of their mouths en masse. Then again, anybody that ate this stuff on a regular basis would be bowling ball shaped and rotten teeth would be the least of their problems.

The booze seemed a tad expensive, but they had a great set of Johnny Walker ultrapremium blends - 4 separate bottles in a case. $200. If I had $200 to utterly and completely waste I'd be a Johnny Walker Blue Label drinking mofaka! The flavored Smirnoffs were a good deal though - $14 a bottle. It seemed to me that the scotch bottles were $10 more expensive than they should have been, and it had nothing to do with the exchange rate, which incidentally is now slightly back in our favor. The beer selection was poor and too expensive. The only thing I was even remotely tempted to buy was Alexander Keith's - the rest of the selection is commonly available in Buffalo. I think you'd be better off trying one of their government-run beer stores if you wanted a better selection, but remember - the Canadians take it in the pooper and beer is generally more expensive to begin with. You better want that beer bad. Actually, now that I really consider it, screw the beer altogether.

They had a respectable variety of tobacco available. Last week I snuck back a Cuban and enjoyed the everliving hell out of it while watching the Bills crush Miami. Of course, there are no Cubans available at the duty free, but they had a decent variety of cigars at reasonable prices. Where Canada loses the plot are with its cigarettes - I've found that Canadians are proud of their smokes but they are like smoking sawdust wrapped in construction paper. They are horrible... I have no way to be polite about it. They make Indian cigs seem high quality in comparison. Feel free to look and be amused at not only their price but the Canadian penchant for graphic pictures of black lungs, etc. that they put on the labels.

Ahh Jessica... I'm glad I could send a little bit of Buffalo in your direction. Speaking of that, would you like me to box up this snow I just brushed off my car and mail it to you? =D

I so miss the duty free store! Reading that post was a little bit of home..

Wow, Drambuie? I don't even drink that stuff, let alone eat it in chocolate. The Grand Marnier was very good, but the ones with the champagne in them - I was a little skeptical.

A few years back I tried one of those liqueur filled chocolates. All that was left was one filled with Drambuie. It tasted like death.

Mr. Big is my all time favourite, second is Coffee Crisp.

You're right about the government stores, there is so much selection there. Which reminds me that I have to head over to the L.C.B.O and pick up some real vodka coolers for a X-mas present. The redeeming quality is that they are made with REAL VODKA and not the "malt" that is used as the base for the Smirnoff Ice stuff they sell over here.

What I was sick of hearing back in the 90's when I smoked over in Canada was the comment from Canadians, "You're smokes smell like WEED!!!" In all fairness of you were used to smoking say Export 'A' and then some Yank lights up a Marlboro it actually does smell like pot in comparison. I tired them all even the weird Canadian version of Marlboro in a weird white and yellow pack. In the end I usually would smoke a Benson & Hedges in a REGULAR sized pack or a Matinee, which weren't that bad.