End of an era indeed. I can't think of many people that lived a fuller life than Sen. Ted Kennedy. Yes, there were some controversies, but on the other hand I can't think of many people that have lived through more tragedy than Sen. Ted Kennedy either. God Bless him - he is the only Kennedy brother to have died a natural death. He was the best looking Kennedy brother as well.

"We owe respect to the living; to the dead we owe nothing but truth"

He was the most dapper Kennedy by a country mile. There was good and bad in his life, but I hope people don't waste time dwelling on the bad. I hated it when the left did it to Reagan and I won't agree with it now. He's gone, God rest his soul.

I am never phased by celebrity deaths. But while reading his obituary this morning I was choking up. I guess that is why I like Politico better than Tiger Beat.

Indeed, regardless of the controversies he did lay down a map for public service. He was very bi-partisan and endeavored to work with everybody regardless of political affliation. I still remember how he verbally took Jimmy Carter to the woodshed, and then took on the sitting president of his own party. Bet if the controversies weren't there, he might have had em. That would have set up a Kennedy vs. Reagan presidential faceoff. The speeches during that would have been worth the price of admission.

No pictures this time. If you want to see my pictures, go to Carmen Kitchen's Facebook page. I just found out that they "borrowed" two of my pictures from my previous blog entry here and used them for wall photos on FB.

I really don't mind, and in fact I think they should ask people to submit pictures of their food... or even of themselves with the food. But jeez, can't you guys at Carmen's at least say "thanks for promoting us on your blog, we'd love to use your pictures on FB to promote our restaurant?" C'mon y'all! Que tal unos pastelitos? Ustedes necessitan hook a gringo up! :) (solomente una chiste, see you soon).

You know the world is upside down when Obama makes me feel nostalgia for the Clintons. Yes, both of them - the Presidential philanderer and his better half. Actually, I have a lot more esteem for Hillary these days than I used to have. Maybe it is a result of her not being a politician anymore?

I've never really thought much of Bill, although over the years I've always enjoyed his shenanigans and the public's seemingly endless ability to forgive him. Really, let's think of this - Bill Clinton, Rhodes Scholar and brilliant man, arguing about what the meaning of "is" is? Surely we can agree that arguing about the meaning of "is" is preposterous regardless of context.

Which brings us to the present day. Man you've got to love Bill Clinton, riding in like a knight in shining armor, carrying the damsels in distress on his white Hollywood producer/donor funded airliner.

The public is being bamboozled into believing the imagery, that Bill Clinton was the driving force behind the release of the two extraordinarily foolhardy journalists who broke the law in the most despotic country on earth. The real truth? The Administration was much more involved than they want to let on - to suggest that this was a "private humanitarian mission" was a flat out lie. Washington Post, and pretty much every other outlet, made it clear that negotiations went along on the side, involving senior WH and State Dept. personnel, and others.

So again, I'm really, really loving how Bill Clinton is getting all of the credit and soaking up the love on the backs of other people. I miss Slick Willy in action. He's not even paying for the jet! One would think that Al "$100 million fraudulent dollars in mah con man pockets" Gore might have fronted that cost, as he is the founder of Current TV.

My real question is this - what's up with this wholly dishonest and easily debunked assertion that Bill Clinton was on a "private humanitarian mission" and what did we give up? The press has reported that our government, including WH level personnel, were directly involved with negotiations (the piece refers to this as "conversations" but you know better).

There isn't a rational person on earth that believes the North Korean government released these two ladies out of the goodness of their hearts, or for a mere photo op with The Artist Formerly Known As The First Black President. So, what did the North Koreans get in return? We may not know for years, although the underlying irony was not lost on me during Clinton's visit. 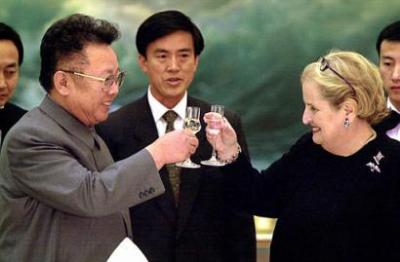 I wonder how many North Koreans starved to death that week!

Pyongyang is in the room...

Ok, I just needed to get a soul coughing lyric out there.

But I totally agree with you, seeing a bit of Bill's old charm did give me a case of the warm fuzzies!

Well I don't know what Kim Jong got I have no clue. Maybe it is one of those now you owe us one type of thing. I'm guessing that what Kim wants is the same thing he has wanted for a long Time. One Korea. I find it odd how he loves our movies and music but not us. I think that is because we get in the way of making Korea one country. I'm sure he would want to be part of the leadership. But from what I hear our buddies want nothing to to with unification. Hey maybe Kim likes bill and Hates Bush, I heard he asked for Bill and Only bill.

Thanks Josh. I will with my homies K-Jong and Mad Dawg

Happy birfday James, by the way. Go get sloshed.

NK wants to be seen as being merciful. They want good PR. We're more than happy to oblige and have been for some time. I read a funny AP article that quipped hopefully that it might lead to more discussions on the nukes. Lol. No, how about the same issues are going to keep on coming up again and again.

North Korea wants one thing and one thing only: attention. This is why they hastily patch together a rocket and fire it over Japan. So Japan and South Korea can flip out, the US can re-think and re-thinking its policy, and China privately tells them to knock it off. They are the runt of the Communist nation bloc. The little boy who misbehaves because Mommy and Daddy aren't giving him enough love.

What did we give up? The view that we are foaming-at-the-mouth dicks who don't know diplomacy from a cocktail weenie.

Now, how about those three Americans detained in Iran?

Clinton has done a lot of personally driven good deeds for medicine so yes, I am a genuine fan.

Is Vlad Putin Telling Us Something?

You be the judge. Vlad Putin barechesting it on horseback -

Yes he wants to come to WWE and Wrestle, HA.

Come on. He has a reputation to keep up. How can a non-bare-chested man loom over Alaska?

maybe he is trying to take fabio's place on the cover of all of those romance novels???

Vladdy has been doing shots like that for years. Photos circulated of him hunting while shirtless when he had his old job.

Russians love their leaders to be 1) Philosopher-Kings and 2) big meaty bears. Czar Alexander III was fairly dim, but was a juggernaut of a man and was loved for it. Nick2 was seen as neither, and Russia ate him alive. That is why Putin is so beloved even though he is an autocrat. He is a big bearish philosopher-king. He will possibly eat Medvedev someday if he gets too close.

He saw Obama's surf shots and want to show he's manly too. Or not