I'd make resolutions, but what is the point? They are only aspirations with mostly feeble commitments behind them... so I suppose I've resolved to admit the pointlessness and tedium behind New Year's resolutions once and for all!

All I'd like is for this next year to be better than the last. I can't wait to see what that all means, but really what I'm hoping for is something good to happen to me that I cannot imagine right now.

Byron Brown Shows Who Is In Charge

And it is not him, but the unions.

This is good news and a step forward, but why did Byron Brown have to ask for the permission of the union?

Why is it that we cannot have any progress, any goodness, any kind of positivity in our city without having to take the first step of kissing the ring of some labor boss asshole? I know I'm missing details so I would absolutely love for somebody to fill me in as to why having to cope with the union as a first step was necessary simply to continue the status quo w/r/t the Conservancy, under the auspices of our uberpoliticized/uberunionized City Hall. Maybe this is a technicality that I shouldn't be worked up over - either way, I'd like to know.

While I feel like I should be happy that it looks like the Conservancy will be managing the parks, to what extent will the union interfere with the management of the parks, seeing as we've just been told that certain county parks workers will be unionized as city workers? Will they have no authority over the handful of parks that the Conservancy manages? To what extent will the city be allowed to interfere with personnel decisions w/r/t the Conservancy? I've got a lot of questions and a lot of suspicions, but not enough information, as you can plainly see.

This is what I want, with no compromises. I want the city to transfer control to the Conservancy and back off, because the only thing the city will do is muddy the waters, interfere and mismanage their position, just like they always have and always will do. I can't think of a single positive development that could come from the city being involved with our parks - after all, it was their incompetence and mismanagement of city finances that contributed to the transfer of control to Erie County five years ago. Somebody please just tell me that the Conservancy will be managed as it has been, just with technical responsibility transferred from the county to the city.

A part of proper management, some say anyway, is the ability to recognize who the best people are for a given task, then empower these enthusiastic individuals to run with it to their utmost. Tell these people that you are counting on their enthusiasm and intelligence to carry the day for a resource that is incredibly important to all of us. Nobody will scramble for resources like people who run not-for-profits and care a hell of a lot about their cause. This caliber of person will always find a way when funds and resources are dry.

I count on the Conservancy to hold these parks in trust for not just us but for our future children, friends and neighbors. I count on their enthusiasm and intelligence to carry the day.

I want to take this opportunity to take the next step, which is to encourage anybody that is reading this to consider volunteering for the Conservancy, or donating money. For $30 you can become a member, although if you would like to donate a smaller amount I know they'd never turn it down. Something like this would make a nice gift for somebody this holiday. I hope this debacle has scared enough citizens into realizing that government will not solve the problems with our parks - it's all down to us. We have to circumvent our government and do this work on our own. When it comes to this issue, we've got to stick together or watch one of the last good things in Buffalo die away.

The Conservancy will always do a better Job on the Parks then the city but it should be the other way around. If you work for the city you should know how important the parks are and make them great. The Problem is that when the city ran them it was a city Job oh and I think I'll go work in the parks department. Hey I can do work at my buddies home in the city truck. Hey I can take my dog a drive slow as a way to walk him. But with the Coseravancy people they are there because the Parks are important to them and that is the priotiry. In terms of the Union, the reason they lost the parks is because of all the messed up budget and money stuff, so if the parks went back to the city it seems like the union would have some say in who gets to be part of the parks department. Hopefully this all works out ok.

The city had an agreement with the unions prior to all of this, so they really did have to kiss the ring a bit.

Sorry that we missed the potluck. I hope that everybody had a great time, as usual! (e:jason) and I were present for his company holiday party, which was a very pleasant experience. See Corporate Josh - 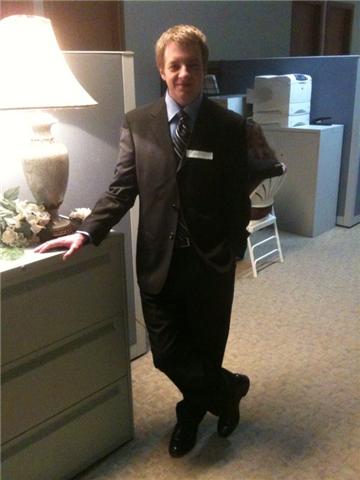 The best part about it, other than the free food and booze (naturally), was seeing that my brother works with some quality people. The bank had their party at their headquarters, which turned out to be a very nice building and a decent work environment.

Banks have a reputation for employing dour, humorless people at the executive level but this is not necessarily true with (e:jason)'s bank. Their VP of Technology was a very nice guy who I had met once before at a card game. The single person at the party that I thought was the most interesting and fun, the one that I could see would be a decent time over a beer, turned out to be the CEO of all people. Not only did he seem cool, but (e:jason) also says that the man is a very smart and capable leader. It's nice to learn that (e:jason) is on a first name basis with these figures at his company, despite the fact that he does not see them on a daily basis.

Interesting discussion re: my most recent journal previous to this one... which I want to expand on soon. Until then I just wanted to write a quick entry about how much I love certain apps on the iPhone.

Remote - the novelty will never wear off for me and I love the idea of laying down on the couch while flipping through albums and playing tunes through the computer. Plus - this forces me to flip through music I haven't listened to lately and it's given me the ability to revisit some old favorites.

Maps - not bad for a default app that comes with the phone. It's been hella useful. If I lived in a bigger city I'd probably get a different app that would allow me to track the public transportation better, but for now this little app serves its purpose.

Last time I was in new york I tried the public transportation feature of Maps- way cool. Unfortunately I found the GPS was often off by a block or so in the super-crowded downtown areas, which made it less helpful.

SnapTell is a cool one- you use the camera to take a picture of a book- and it somehow recognizes the book and submits it to some database- then shows you where you can buy it and who has the best price.

Photogene is a great photo editor
NASA is full of geeky space news and photos
AroundMe lets you look up businesses by type (restaurant, coffee, gas) and it lists them by distance on a map.