I think it's a fair question. Why should the other half of the country that didn't vote for Barack Obama treat him any differently than the way liberals treated George Bush for 8 years and counting?

In the age of "unprecedented transparency" Obama's government is debating on how to give you bad news.

You see, the bank stress tests aren't going very well, and Obama's government is concerned that the bad news is coming at the wrong time, which is why the both the timing and the nature of what will be said about the stress tests is being manipulated. The stress tests will contradict every falsely optimistic word spoken by Barry about the economy this past week. That's a fact - if the stress tests were going well, there would be no need for manipulation of information.

See, they think it is really important to tell you that JP Morgan, Goldman Sachs, et. al. just profited in billions of dollars this past quarter, but you really shouldn't worry yourself with scary information on the horizon such a dozen banks potentially failing. which will make the economy collapse even further.

Among numerous laughable items attributable to the Obama administration, the promise of transparency is perhaps the most frequently broken promises.

I'm telling you this now, and heed this warning - this in particular isn't political and I'm saying this as a friend - with tax increases, several million jobs still to be lost, foreclosures ongoing now not just as a result in poor lending practices but job losses, steeply declining tax receipt projections (especially in NYS) despite punitive tax increases on "the rich," tens of TRILLIONS in future budget commitments with no rational way to pay for it, either with tax increases or future borrowing - I hate saying this to you but we're in deep, deep trouble and we aren't likely coming out of it anytime soon. Some think they will simply monetize the debt, meaning rampant inflation. Oops - that's another topic - our money supply has tripled only in 6 months, it's never been higher. Rampant inflation, maybe hyperinflation, is an inevitability based solely on the extra trillions already in reserve in the banking system. Cheers. :(

Next post - How can New Yorkers get a minimum 4% increase in their take home pay? Get the fuck out of New York State and move to Texas, Florida, or any other state that doesn't have income taxes whatsoever, not to mention a vastly superior quality of life, a vibrant private sector and a government with less of a predilection to treat you with contempt. Did you know that the state of Texas, by itself, accounted for 70% of the nation's private sector job growth last year? It is absolutely insane and a self-inflicted wound to stay in New York.

HA! Yeah, what I meant by "what to do" was really the identification of the best idea. I could go on but I get more upset as I think about it... gay marriage is a topic that makes me mad/sad.

LOL I wasn't actually expecting an answer to my question, I just thought the way you worded it sounded funny. I'm still on the fence with the gay marriage thing. But I agree that under the government the right should be for all or no one.

Matt - the answer was (and is) that marriage should be open to everybody and sex shouldn't even be listable on government forms, etc. - marriage as a civil institution should be available to everybody or nobody. I think it's a rational argument and I've always supported it honestly and whole-heartedly anyway, which is more than I can say for most armchair activists out there.

so joshua, what did you do about gay marriage four years ago?

Then again, the radio mullahs are calling Obama a Marxist. I would like to know how Obama advocates collective production and distribution. I would like to know where the violent uprising went. These comparisons are made for one reason only - to marginalize and attempt to pin evils on people in the most superficial way possible. That's why this shit is always distributed through e-mail chains. Heh.

USCF - the most rational person on (e:strip) - the guy who gave me the best and most rational explanation for what to do about gay marriage.... four years ago. Bravo sir!

(e:Z) - in particular I was referring to people like Peter Orszag, White House Budget Director, who when questioned about our spiraling debt he essentially responded, "What spiraling debt?" :::link::: That can't even be characterized as rose-colored glasses, but blinders. This is Obama's Budget Director - think about it. He has other transgressions on his record, telling people that the chance of a Fannie/Freddie bust was "3,000,000 to 1" and that the cost of a F&F failure would only be $2 million - an episode this article highlights as well.

Of course, his and Obama's answer to the criticism was "well, we inherited a deficit!" and expects that you are too stupid to realize what they are doing, their answer to the deficit is to triple down on the national debt. And, there isn't an economist on earth who thinks the USA will be averaging out 180,000 new jobs per month any time soon. We've already lost over 2,000,000 jobs this year and April isn't over yet, and the job losses are going to continue. THAT is the sort of false optimism coming from Obama's government I'm warning you about.

When I encounter Reductio ad Hitlerum, I usually stop listening. Such comparisons trivalise the suffering and deaths of the millions caused by the Nazis. Also, specifically, I don't think anyone who actually understood what Hitler and Nazis did would honestly compare any U.S. president (not even FDR and his internment camps) to Hitler.

It seems that Godwin's Law is in operation in the political world.

Who was it, Bill Buckley maybe, who said something to the effect of "The left is tolerant of all viewpoints. They're just shocked and appalled when they discover that those viewpoints exist."

The *real* liberals, and by that I mean the ridiculous hard cores like the folks still whining about Bush not being in jail, not the bandwagon fools who just want to fit in, they are skeptical of Obama being just like Bush. However, I really doubt that the intellectually unsupportable arguments concerning Bush being Hitler are going to be applied to him.

It's too bad, because I like President Obama as a man, and although I do think his administration is buffoonish so far I'm not going to start making bullshit nonsense arguments about the guy being Mao. Lol. That makes you no better than the people you rail against. You just fight bad ideas and concepts with good ideas and concepts. You point out how their arguments are unsupportable. I'm not going to be like them.

If this counts as false optimism, I don't think I could handle any pessimism.

Why shouldn't conservatives shit all over Obama like liberals did over Bush 43?

It is the right of every American to criticize the government. So I say "go for it, conservatives, give 'em hell" I find it deeply satisfying for some damn reason when the tactics of the left are effectively used against the left by the right in the political arena. Certainly, the left can't decry the protests since they do the very same thing.

On the other hand, some conservatives have said that it's "unAmerican" to criticize Bush 43 because the country is at war. Has peace broken out? Is the country no longer at war, so it is ok to criticize Obama? I think that by adopting liberal tactics, conservatives might be seen as political hypocrites worshiping at the altar of expediency in name of ideology.

I would love to see massive protests by the conservatives even if I don't agree with their viewpoints.

I think free speech is for everyone. Period. No if's, and's, but's.

Here's a fluff piece, interesting nonetheless, from China Radio International regarding a young American who studied finance in the UC system, but ultimately left to open a bakery in Beijing. It's interesting seeing the Chinese exposed to American culture that has nothing to do with companies, but with real people. His customers love him. WTF - I'm blonde and I studied Finance and Economics. Maybe I should forego it all and open an American bakery in a foreign land as well?

You'll appreciate this - check it out.

UPDATE: I thought I'd show you all the progress being made on my "roll up the rim to win" collection thus far, and a piece of candy with a name I couldn't believe... I bet Ralph Lauren's daughter keeps this in stock at her store in Manhattan. 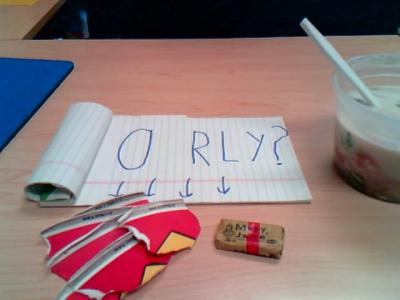 When I was growing up, Mary Janes were always the last hated pieces of Halloween candy.

Oh, and to the right there was my tom kha soup for lunch, quite tasty.

Somebody tell me what I just ate. Please? :(

(e:tiny) - think of all the free stuff people are leaving behind!

haha, you've never had those mary janes before? my dad likes 'em. sort of chewy/peanut buttery if I recall.

Wow. You are first person who I (sort of) know that rolls up those rims.