i just read that some peeps might be looking for housing.

i am living in a new coop on the west side, and we will be looking for some new people to move in withing the next few months.

we share vegan meals a few times a week and share all our food. we all take turns cooking and cleaning. when all the rooms are finished, we will have 11 good people in our house.

i love our ancestors an immense amount. i know we have incredible wisdom that came from all their experiences.

yet i have no idea why on earth any of our ancesters would have ever decided to move to an icebox. it seems near impossible that (relatively) hairless mammals would have evolved in such a cold climate. so, the nomadic peoples MUST have come here and to other cold places. but i can't understand why. i guess there must have been more food, but the earth was not yet full enough of humans to make this necessary.

actually, when the europeans came over, why didn't they all just move to the south? most of the old school colonies were in the north. it really baffles me.

it's 7 degrees right now. feels like -9. that is way, way colder than anyone keeps their freezers. i'd stay inside if i could.

For starters, southern climates tend to have malaria, which is far more deadly than any cold spell. Also, the whole cold thing was kind of forced on the human race already. There was that ice age about 10,000 years ago which we as a species couldn't avoid; the humans that survived probably weren't bothered by Buffalo-like temperatures after enduring such a large freeze.

As for the south (U.S.-wise) they did come to the south. The first English colonies were in NC and Virginia in the late 1500's during the time of Queen Elizabeth.

i think the british settled further north than you'd like because the south was already taken, no? most of south and central america belonged to the spaniards. i think they controlled florida at that time as well.

because humans are capable of manipulating their environments very well, they are able to adapt to the most extreme environments such the arctic or in modernity, poverty. and because they migrated through from asia to north america via the baring straight, it's only natural that they would settle on the northern most parts of the continent first.

but to put it more simply, "man does because he can". why else would we put people in space?

My guess would be that when they got here it was a forgein land. I'm also guessing it wasn't winter yet so they had no idea about it. They didn't know how to survive the winter with out fresh food with out the help of the indians. If that where true then would they really want to take a chance and move down south where there might not be anyone to help them, plus they had homes established. I'm just guessing really. But if you know you are safe here why move. Yeah eventully people did take trips out west but it wasn't easy. Or maybe there where hot sexy little indian girls to keep them warm all winter and they didn't want to give that up.

i made it through what has been the most challenging day of work i've every had.

i gave a sermon yesterday at the unitarian church in jamestown. i talked about my time in new orleans and all the beauty i found there. i don't think it's something that people have heard before. people have only heard the bad things and about the destruction. i spoke more of the work i did there at the soup kitchen and the feeling that we were rising above the ruin. it's true, there was so much love there, it's difficult to put in words.

but wow, i was SO nervous beforehand. i really haven't done too much public speaking, but i knowi'm not nervous about it if i have something that i have perfectly written out and i can just read it. but since i haven't had a computer for a while, i didn't write it all out. that may have been a bit silly for me and caused me unnecessary worry, but even if i had a computer, i really didn't want read everything from a piece of paper. i wanted my message to be a little more personal and heartfelt and i intentionally left some stories to tell off the top of my head because i figured i would use my own words and be given a chance to look around at people while doing it.

nervousness. i practiced in the car on the way to church with my mom, and i started crying at least 5 different times. i am so glad i did this because i made it through my sermon without crying. (i did cry during some of the hymns, though. one of them, which is actually my favorite UU hymn, was so perfect that i couldn't sing it at all because i was crying too much. the words are at the bottom of this post.)

well, even though i messed up once, it went wonderfully. it did come out as heartfelt (according to all the people at church). and i will admit that it gave me a huge rush. i enjoyed giving my message of peace and love and knowing that people got to hear my positive words does make me smile.

one super straight laced guy in his 70's came up to me afterwards and said, "that sounds just like a rainbow gathering--have you ever heard of those?" yes, i assured him, most of us there are rainbow family hippies. i was surprised that he himself had attended three gatherings! you never know about people.


here are the first three verses of my favorite hymn, called "We'll Build a Land" the music for this song is really upbeat, daring you to take action.

(chorus) come build a land where sisters and brothers, annointed by god, can then create peace, where justice can roll down like waters, and peace like an ever-flowing stream.

since i'm going back to school, i guess i need a computer, right? is it even possible to be a student these days without having a computer?

i remember that i even brought one to school when i went the first time. it was an 80/86. i don't know what that means, but even in 1993, everyone laughed at it saying that it was really old. maybe that means it was made in 1980 or something. i used that computer for four years and only really learned how to use a mouse after college.

so does anyone have any advice on how to find a used computer to buy? or is this sketchy and should i only think about getting a new one? if so, is there anything wrong with getting the cheapest one out there? i don't need anything fancy.

wow I love that idea paul. It's also a good way to recycle old computers. Oda, I may have an extra computer in the future but I'm not sure when. Sorry that is so vague. My mother said she would send me her used one and after that I have to transfer my old files to the new computer. It could take me a long time if I don't get it before classes start.

Buy one at COmputers for CHildren on Deleware. It is across the street from where blockbuster used to be, next to the YMCA in buffalo but just after the target plaza. ANyhow, they train innercity youths to to make computers out of parts that were donated from other people computers they didn't want anymore. They are tested and fully suitable for what you need. I think uncutsaniflush has one. Not only will it be cheaper but it will be helping a good cause.

here is the grossest picture of me ever taken. 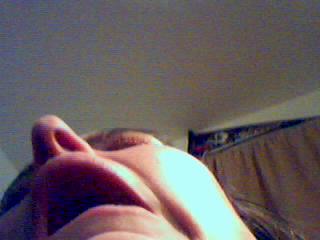 i was making jack-o-lantern mouth faces while i was trying to see if my nose really is that crooked.

i look like i'm in a lot of pain. how sad. but how fun to have a camera to play with!

funny. i like the new user pic. i cant wait to get my camera!

i was told that i made a mistake in posting what i had previously posted about my experience at the new year's party.

i appologize that i was careless and would never, ever want to hurt anyone.

in order to not offend anyone, i have censored my journal entry.


at the party, ALL I COULD DO WAS MEDITATE. i had little desire to join the rest of the party, i just wanted to be quiet and peaceful and enjoy meditating. (although i did enjoy when people came in a couple times to visit for a bit.) it was so peaceful. it was really intense to sit in a room completely still and alone while people all around were enjoying a party. it was enjoyable to me, even if it doesn't necesarily sound it.

but then i realized that i did want to go to a party. and i decided that it was pretty fun.

i realized that there are a lot of drugs in buffalo: yesterday, i went to visit my neighbor and he described all the drugs he did on new years: lsd, k, pot, and various pills that i didn't know. when he was describing his experience of being in a "k hole" i realized that i never want to be that messed up in my life. and i am sure that i never will be.

wow I had no idea that any of that was even going on, interesting.

hmmmm, you and i should be friends!

oh and, everyone, if you look real close at (e:pauls) user pic you can see his cookie monster!

Wow, I just thought you were a crazy spazz. At least it explains a lot. On a side note to someone else - hm, (e:brit) in your luggage, whatever.