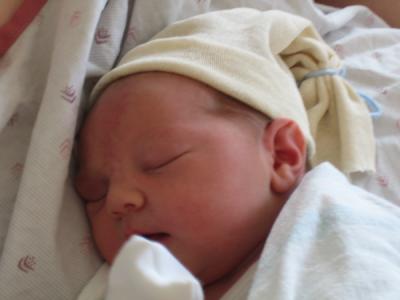 As of last sunday, Mr. Wiggles has been officially named Ari Nachshon.

Ari is Hebrew for Lion. We named him this because it was a name we could agree upon. Nachshon is from (WIKIPEDIA - Nachshon), a biblical figure who I've always admired since my childhood Rabbi gave a sermon about him doing great things even though he had a lowly name that meant "snake".

Congratulations! Looks like a cutie. Despite being demanding I hope he's cuddly sometimes. I like the name too, it was hard enough choosing a name for our new kitties, I'm not looking forward to naming children.

That's a perfect name. I always thought Ari would be a good name for a boy!

He looks awesome. His name sounds awesome as well.(and I mean it! I am just having a word-variety crisis because of (e:jon) viral video). It somehow sounds very much Indian and not Indian at the same time. :)

I was going to make a Joke about if you named him after the Character on Entourage and what is kinda funny is then I read he is loud and Demanding just like the character. On a serious note for a second sometimes people really are like there names or vice versa. I was some place and they had these writings on paper it would say a persons name and then under neath maybe about a page of writing describing the person and a lot of them where right on about people I knew. Of course with things like that you notice the stuff that is spot on and forget the stuff that isn't like them. nice picture by the way.

oh, thanks for posting this- I'd been meaning to ask!
Looks like he has a swollen eye- hope it's ok!!

I have some friends that just named their daughter Aria Madea. I guess I could assume that means lioness?

Trust me, this is the easy part. And welcome to the world, Ari

Cool name. I liked reading about Nachshon (and feel bad that I didn't already know his story.)

Ha! That's babies for you - loud and demanding. :)

Okay, so my first week of fatherhood is past me now.

We took the little guy home on the 17th. It became a little stressful when he had some difficulty feeding, but eventually stuff worked out. Right after he was born, he got jaundice, which he still has but which we're working to lower. Apparently, newborn jaundice is common, but it's a little upsetting seeing your son have yellow eyes.

(e:inscrutable)'s family came up and helped us with stuff, like laundry and keeping sane.

- You really have to watch them every second
- While you want to be gentle with them, they're hardier than they look.
- The "you'll have to change them every several hours" warning is bullshit. You can change them and they'll go in the new diaper thirty seconds later, and another clean one thirty seconds after that.
- Never be more than five feet away from a pacifier if you lack the ability to lactate.
- Not being able to lactate doesn't mean they won't try to get milk from you anways.
- Having a new child is like meeting somebody new whose personality you're trying to figure out.

I think I had neonatal jaundice as well. I was a preemie to boot, by about a month. Apparently, I looked like and weighed as much as a grown rat. My mom's memories of me seem to be very fond, even though I looked like a rodent. :) I am sure you will get through this slightly challenging phase and love it all!

You look very happy being a new father. Congrats!

Congratulations - here's to an even easier second week - although I have no real advice as I don't have kids. I think I had jaundice as a baby too. or maybe mike did, I am pretty sure I remember my mom talking about it.

aww well congrats on making it through your first week of daddyhood! 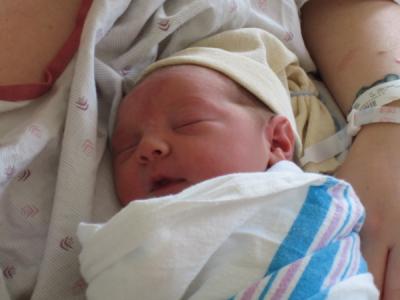 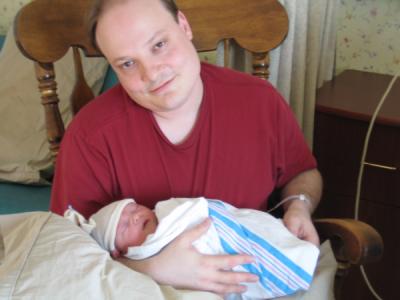 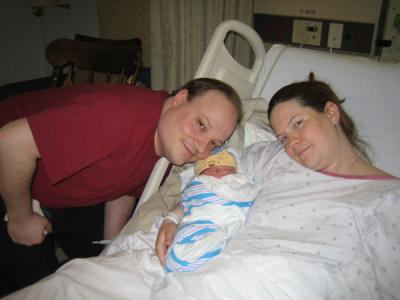 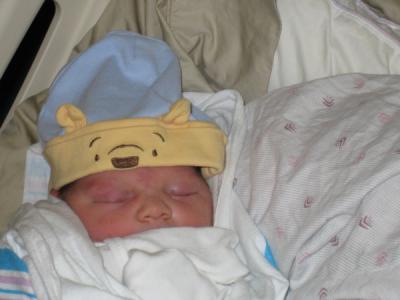 Wow. How did I miss this wonderful post!! Congratulations on the tiny new and such a splendid little heir!!

Congratulations!!!! Your son is adorable, I'm really happy for you!

First of all congratulations and since a few other people said it Happy Birthday.

Now for a little sillynes or maybe it isn't really silly. You said there is a new (e:peeps) and that his nickname is Mr. Wiggles . 1. Does the nick name have any thing to do with the singers/kids show the wiggles? 2. Will Mr. Wiggles also be his (e:strip) user name and if not what will it be? 3. When can we expect to read his first post (maybe in baby language about how he doesn't want a bottle he wants a big boy cup but he can't hold up his head yet so that isn't really an option for me yet). 4. Didn't you two have a cat that posted ? 4a. If that is correct will that cat start posting again and what is the cats view on the new (e:peep)?

In all seriousness congratulations and I wish all of you the best of health and wish you and the family well, I'm sure you will be a good dad. If I smoked I'd some a Cigar for ya so I'll smoke one in my mind.

He's a tax baby and we can't even claim him as a deduction this year. What a ripoff!

Mr. Wiggles is his nickname.

According to tradition, I'm not supposed to announce names until after eight days and the ceremony, to confuse either the Evil Eye or the Angel of Death or something else otherworldy and nasty.

His initials will be A.N.V.

oh wow! this is awesome...congrats.

I don't think that's a name that I would have picked, but if that's what feels right, then that's what you gotta go with. Congrats.

hello new lil (e:peep)! congrats to both of you :)

An updated sonar reading has now been taken, and we have a confirmed penis sighting. We've upgraded the status of The Project from "unspecified gender" to "we're having a boy".

Time to figure out how to be a role model for budding masculine behavior...

Congrats on the news! Keep us posted on how (e:lilcarolinian) is doing. :)

Congratulations on having a boy. I would be so paranoid having a girl that I probably would have to brush up on my 9mm skills at the range.

The first thing a good male role model needs to know is how to throw a football with a tight spiral. A Dad that throws like a girl is not very masculine, obviously, so if you do not have this skill, hit up Dick's and pick up a cheap ball. This should be done pretty much as soon as he is born. When he pops out, give him his first football.

The second thing a good male role model needs to know is how to change a flat tire, something that should be taught before the age of 10. To aid in this process, dislocate one of the tires from his Big Wheel, and let him know he has to hoof it until he can put the tire back on. When it comes time for him to change a girlfriend's tire in the rain, he'll be ready, instead of being helpless and forced to do the un-manly thing, calling up someone else to do it.

The third thing a good male role model needs to know comes from the school of James Brown - "Papa Don't Take No Mess."

Mama said Papa`s smart
Papa got a whole lotta heart
And Papa would do his part
When the game get hard, hit me

Congrats, but don't torture yourself with the role model part. That's a day at a time exercise. You get to mold them and you as you go.

(e:inscrutable) got the sonar today. 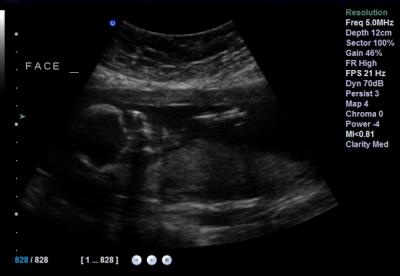 The stubborn kid kept its legs crossed the whole time, so our master plan to choose pink or blue stuff is foiled once again.

wow congrATS! That's awesome. Of course this is like a month late cuz I just am going back and reading journals now.

Wow! There's a whole brand-new person in there. Congratulations!

I had wondered if that's what your news was... congratulations! I think you'll be a terrific dad.

so...i take it this is the big life changing news you had a while back!? congrats :)