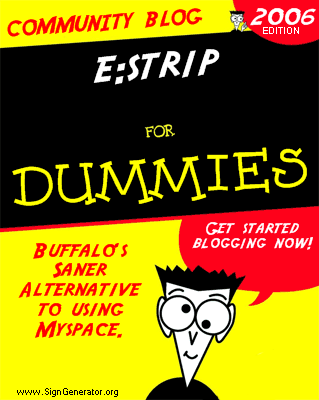 Had a great time on Friday. I'm going to send you my # through the post it.

For some reason, the (e:strip) toolbar in the upper left-hand corner (the one that is used for new post, etc) is missing. I'm using Safari 2.0.3. But if I click my user pic, I get a new compose text box. Weird.

In other news, the electric shortages forced MySpace to close down for a while. In my best Jon Lovitz The Critic voice: "and nothing of value was lost". Any site that gives the error message "sorry, you need to be a member to do that" when you fail to log in as a member is a site that *deserves* to get taken off of the net. "Nielsen twin powers--activate!"

The lasagna recipe I mentioned in a previous post actually turned out pretty decent; definitely worth the money spent on it. The only problem is that I have way too much leftovers, a lot more than I planned for. 6 days of spinach lasagna might just be a bit much.

I will look into it soon. I am not going to get a chance to fix it until I upgrade the site to newest surebert this weekend. In the meantime use Firefox.

Lasagna freezes well. Maybe you can wrap it up with cling film in single serving sizes and zap it in your microwave some day when you don't feel like cooking.

It's so like me to think "ah-ha, I will save some money on eating out by making this

at home" and then end up spending the rough equivalent of four big whopper value meals buying all of the ingrediants at Tops.

It is also like me to be easily deceived into believing that such things as totally fat free ricotta and mozzerella cheese, which I didn't find at Tops, could actually exist in this universe, and that such concoctions if they do exist could plausibly not taste like cardboard. At least I did have the common sense not to try to make the thing for dinner at 9:45PM tonight, as I'd probably still be making it now; it probably means that I'm getting better with sense of time (which is not like me at all).

And all these coffee-related posts by (e:theecarey) during the last several days finally pushed me and my craving over the edge--I took my percolator out of storage, the really nice one with the long snout for pouring, and fired it up with a Starbucks dark roast. I'm probably like that anime cliche of the good guy who carries around a low-tech revolver--drip makers just don't do it for me, I don't care how fucking programmable they are and yes I really do recognize a difference in taste. I'd take a cheap percolator or french press over these latest thing from brookstone any day of the week; at least I know I'm always going to have a reliablly good cup of coffee.

haha... I have the lowest-tech cappuccino maker... I love it. It's like those little metal "moka" italian espresso pots- but it somehow steams the milk too. I must admit that so far every cup I've made has been terrible... but I just like that I can (theoretically) make 'cappuccino' with this dinky little thing, and not the $3000 one (i'm not kidding) from williams-sonoma.

After two days, still waiting for the chalk to dry...

Time to go make some chalk.

In all likelihood, this is probably going to blow up in my face and turn really messy. In fact, I probably should just stick with the target and dollar store suggestions people made in their comments.

But I'm just too dang curious to see if this will actually work.

After an unexpected shortage of chalk at the last (e:strip) chalking and having found sidewalk chalk a whole lot more difficult to come by in your average grocery/office supply store, I've started doing some research into making homemade chalk and found a decent-looking site detailing some of the recipes

I really want to try this, but I'm going to have to wait till the weekend; it seems messy and the last thing I need to being doing is cleaning up chalk residuals at 3AM before work the next day (which, left to my own devicing, I would gravitate towards doing).

A few days ago, (e:Uncutsaniflush) and i got a 4 pack of crayola chalk for 99 cents at the Tops on Grant and Amherst. I keep it in my purse in case of chalk emergencies... used it on the corner of Forrest and Elmwood to quickly scrawl estrip.org....

try the dollar store. they usually have loads of sidewalk chalk.

I hate having to change plans

I really wanted to go to BarCamp is Rochester, but they start the thing on Friday morning (I goofed and thought it was a saturday). By the time I get out of work (~5:00PM) and spend the next 1+ hours driving to Rochester, probably no one's gonna be there; it's such a small group, they'll probably get bored to tears and leave before 11:30AM. Damn, I wish Buffalo could support an unconference.

Luckily, I have a backup thing I want to do this weekend--see "Pirates Of the Carribean II". I looks like a fun movie, and after missing the Black Pearl and getting all these "are you living under a rock" responses from people who saw it (I eventually did see it, a year or more later), I want to be able to keep up to speed with everyone else.

Yeah Johny Depp is a preaty good actor. Yes he is a little weird corky and strange but in a good way. By the way what ever happened to His look alike Skeet Ulrich or what ever his name was.

Not sure if it makes you feel any better, but i didn't see the first Pirates film... well... until last week when it was on Canadian tv. How shameful is that from someone who thinks Johnny Depp is not only pretty, but a pretty good actor?! *hangs head in shame*

I show him my program that downloads all the NCSU online course registration web pages and searches them. The program I stayed up two days straight working on to get finished before he arrived and which caused me to receive an F on my Anthropology paper the following Monday. 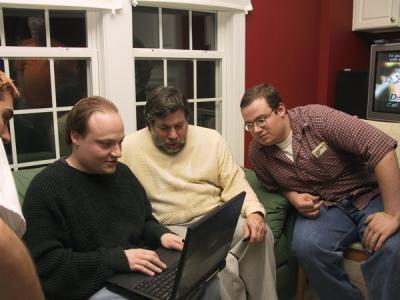 No intercession from Steve whatsoever.

He comes back to visit NCSU again a year later to get his honorary doctorate. I show him my Shakespeare note-taking program. He tells me "that's what computers were meant to do!".

Again, no intercession of any kind.

After reading the posting by (e:Twisted) and the comment by (e:Zobar) , I realize the error of my ways; I was petitioning the wrong Steve. I guess I'll have to e-mail the other Steve if I want a job in Apple's social software division or their super-secret death-ray department.

(p.s. I'm kidding. I'm actually quite happy with the way things turned out, for the most part).

Yeah, see ... if you need a Steve to help you out or loan you a death-ray, you need the one who actually still owns the company.

Taste Of Things To Come

I was all set to go to the Great Blue Heron festival. Then last night, I totally ruin the whole thing by hanging out with a coworker at Goodbar and getting really wasted and waking up late in the afternoon when half the day's Blue Heron acts had already finished.

I suppose that my choice of activity last night was actually more healthy (mentally, not physically) than what I had originally planned. I got a large dose of outside-of-work human contact with people my own age, which isn't something I've had a lot of these past several months. And at the end of the night, I had some of the $20 I withdrew from the ATM left over in my pocket; going to the festival would have cost me at least > $50. Having walked to Goodbar and back got me several miles of walking, too.

To make up for my sin of not seeing the Avett Bros, I went to Taste Of Buffalo to get my local activity fix for the weekend. The food was overpriced, but still tasty. My favorite part was all the Indian food, which IMHO is the bestest kind of food there is (I really need to learn how to make a decent saag paneer).

Tomorrow is going to be "The Mother Of All Housework" days. There will be no sleep till everything is in its appropriate place, all the laundry is done, and every room in the house smells "pine fresh".

didnt i read that tomorrow is house cleaning day, like, 4 journals ago??

India Gate also used to have weekend buffets as well; I say "used to" because the sign that advertises them is no longer displayed. Nevertheless, I really enjoy going there. I also like Indian Diner on Sheridan a lot. They're a bit cheaper than India gate but the food IMHO is almost just as good, and they have dinner buffets every day.

The silly way I usually tell whether the Indian food is good is whether I become really sleepy 20 minutes after eating it. A really good Indian meal will put me out like a light.

I love Indian too, though I'm not sure I can tell "good" indian from "bad" indian. That said- India Gate (next to Goodbar) has a dinner buffet on wed. nights for 9.99 or so. Having that and Saigon Cafe right around the block from me makes me so happy. (and so fat!).

Indian food is delish. That is one area of food I would like to learn how to make and make it very well. yum.

Taking One For The Weekend

I've decided to stay late at work tonight. More done now means the less I have to worry about later. I'm kind of on a roll, and I might just have located a significant show-stopping bug. The way I figure it, if I get something major accomplished tonight, I'll be less stressed over the weekend.

I'm not totally voluntarily giving up tonight, however. The PHP group that I was supposed to hang out with tonight cancelled again for the second time in a row. Given that the Buffalo PHP folks are continually cancelling at the last second and that Buffalo Geeks never got off the ground, I'm gettng the feeling that if I really want to participate in an honeset-to-goodness technology networking organization, I'm gonna have to freakin' start one myself.

I've considered going to the Great Blue Heron Festival, which I've really wanted to catch for the past two weeks since I found out that the Avett brothers were playing there. I really wanted to see them at one of the local venues (e.g. Cat's Cradle) back home but never got the chance to because I came up here. They definitely do some interesting things with bluegrass. If I make significant progress tonight, I could feel a lot more laid back at the festival.