adventures in one dimention...

blessed are the single minded, for they know nothing of their limits.

recently, i have been comparing my (would-be) love life to that of a Möbius strip. being one-dimensional, it is all inclusive and rather limited- although infinite, paradoxically. it spans within its boarders, trailing endlessly. to exist in one dimensional space would allow travel to any time or location.

and here i am. more correctly, we are. i look to the forward me; and i, we, they look back at who i was, am, and shall be. side by side we sit. we always have. the many things outside this space move around the boarders coalescing and forming, but never permeating or sublimating. the actions of the past/present/future have all been within me, change being something matrons whisper to three dimensional offspring. all within me...

eyes shut, the expanse of my will fills the void. consciousness cascading and parsing itself through me, i feel so endless and open. eyes closed- self reigns and the hammer of subjective paradigm holds no sway. its here that my *self* resides, in this limitless/contradictory vessel, free of the simple carbon strands that bind me to that place which will never be real enough. 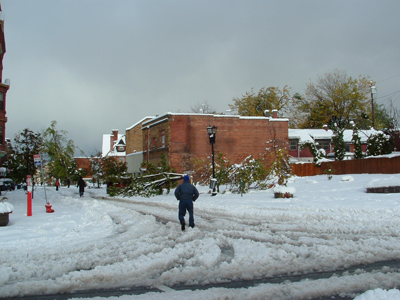 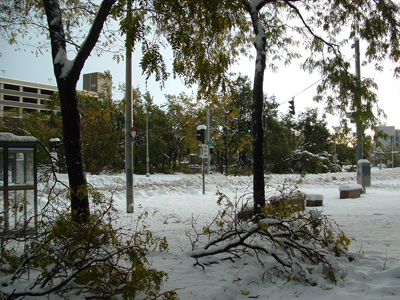 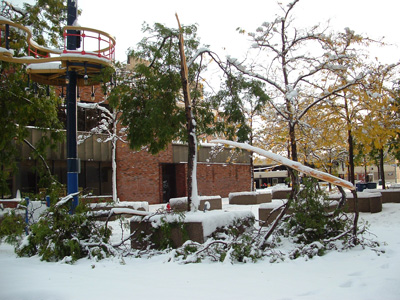 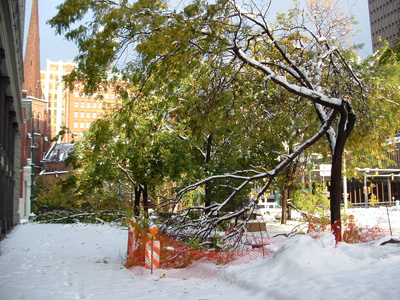 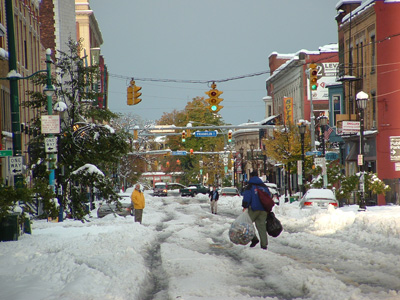 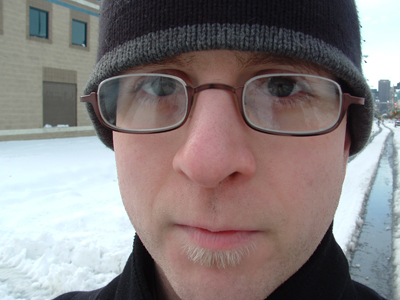 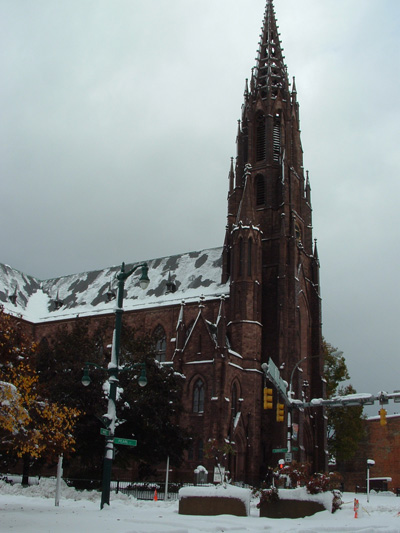 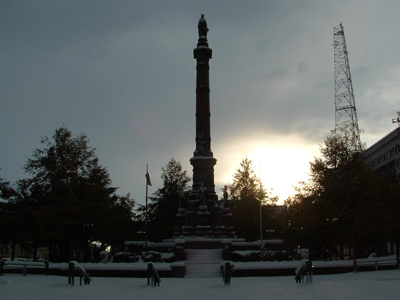 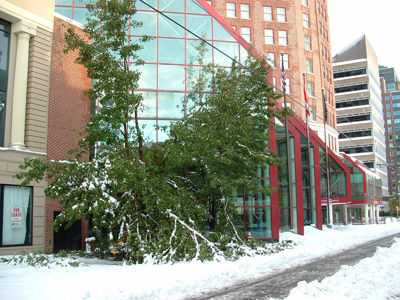 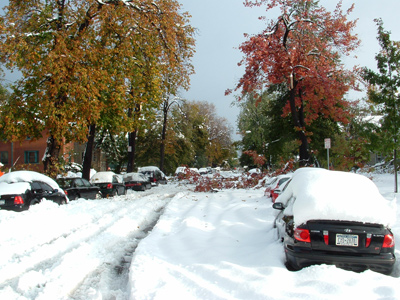 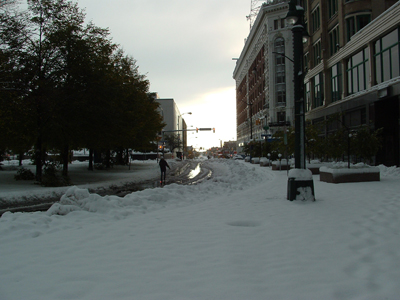 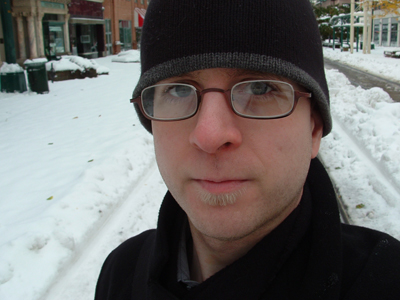 our hero- yours truely 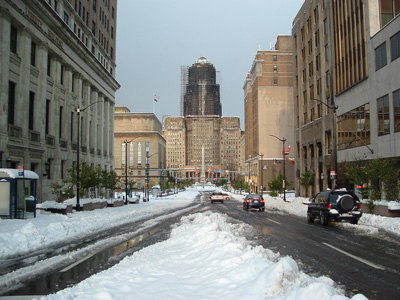 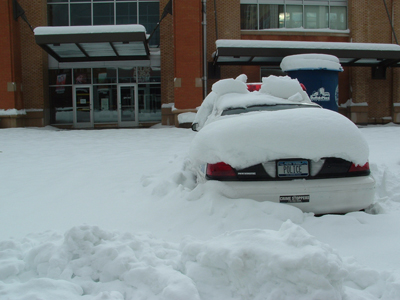 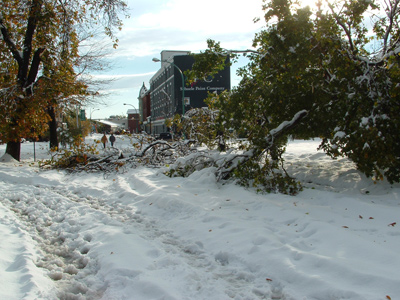 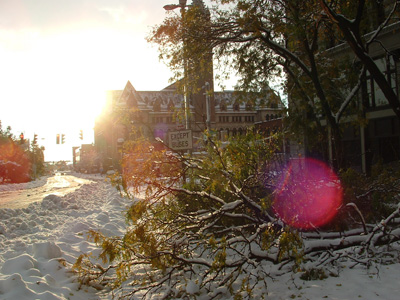 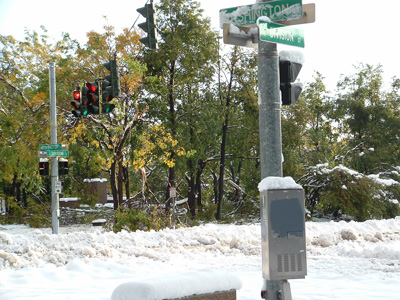 Wow, those are some great pictures of the aftermath. I should probably make a gallery out of all the images people have posted on the site.

took some pics tonight. ill post em tommorow when i have the time.

oh my god. two days later, and im starting to feel the pain of the pound cheeseburger, onion rings/fries, halfa milkshake, and two sodas i had on monday at cheeburgercheeburger. and that was just for lunch. i think i may have some crazy eating disorder where i just can't get full. has anyone ever heard of such a thing? 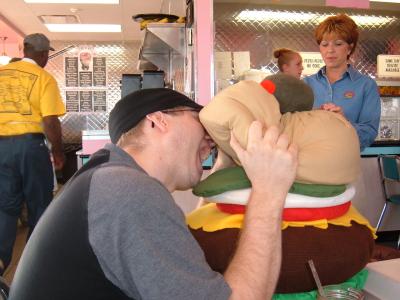 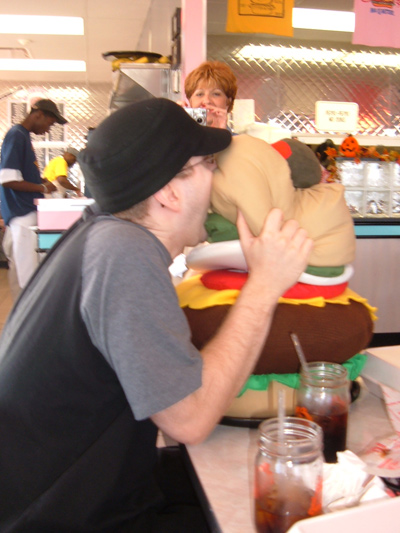 then, after you have gorged yourself on bovine gristle, they come out with aformentioned (in image!) pretend burger. they commence to announce your slothenliness to the rest of the diner. there is clapping and the flashing of camerabulbs.

so yeah. doing that, then eating the leftovers of somone elses meal about an hour later- coupled with playing dodgeball till you are sweaty and then standing out in the cold is apparently enough to make me sick for some reason. muscles are sore from coughing.

so what did i do? i took offa work today. i may not be that sick, but id rather take my chances on getting better before i get worse. my boss is cool enough to let me just change my schedual on the fly like that and come in on another one of my days off. so thats what im doing. no way i would be able to work with the combined acid reflux/coughing/sore throat/sore muscles i have today. i can hardly sleep as it is, but im gonna try.

anyone wanna bring me some chiken soup? :P

I know how much you like babies, and as we all know; babies are covered in disease! I just came back from seeing some nieces and nephews. Gave a couple of them a smooch and now I'm sportin' a cough too. Well just, look at this pic o' mine. I look like a sespool of deadly viruses over there with that goofy smile. It's true. Don't be so quick to blame your ill health on that dead bovine flesh, it's a lot cleaner than you think ('cept for the sponge-a-form, that was a doozy. I mean who saw that comin'?).

How does one start a blog? i suppose in this manner:

Hello world, my name is *not* Vycious. So you can call me that fer now. I have been livin in good 'ole Buffalo fer aboot ohhh, my entire life. The past eight years or so, directly downtown. Currently residing in a crappy little efficiency apt. called the mayflower with my familiar- if he can be called that: 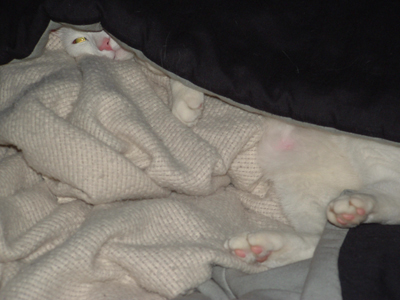 yeah. that's him. yoda. that's what he was named.

now how does someone who is an admitted hater of felines come to live with one? well... the simplest answer is: by default.
don't get me wrong, i love the little shedding machine. but not ever, not once, did i ever consider getting one...

digressions aside, its safe to say there will be more about the little furball, later.

Generally:
Music, Films, Ergodic Literature, videogames, dancing, wine, beer, some forms of journalism, eccentrics and eccentricity, getting my lazy ass back in shape, bike-riding, metaphysics and other dead religions, the futility of altruism, the exaltation of the self, occasionaly drawing/painting/writing. looking for a backdoor outta this trainwreck that the creator left. oh, and my complete and total ascension into Heaven and usurping of the throne.

hrm. i like to read and have read:
Wicked, Kung Fu High School, Fight Club, Good Omens, Fear &; Loathing, Zen &; the Art of Motorcycle Maintenance, All of the CORE Dragonlance Saga, Lord of the Rings Trilogy, anything written by Rollins, the fountianhead, trainspotting, 1984, brave new world, war of the worlds, American Gods, the illuminatus trillogy!, house of leaves, revelations, neverwhere, the necronomicon, the season of passage, the hitchhiker's guide to the galaxy, the restaurant at the end of the universe, life the universe and everything, solong and thanks for all the fish, young zaphod plays it safe, mostly harmless, and many more...

currently, im forging the world biggest migrane trying to teach myself programming- with the help of enknot. so right now, im reading a quickstart guide to (x)html and css. good times.

but as of right now, im recollecting the music i lost in a recent hard drive crash. when i refer to this music, i mean almost all of it. roughly 40 gigs worth. remember- internet filesharing supports terrorism and is completely anti-american. Dont forget to back up your files, kids!

for those of you who already have seen my creepy ass on myspace: good for you. and yes, i just copied and pasted all that junk here- but it makes introductions to would be stalkers so much easier, dosent it? i would rather not, but if you must- its here:


anyhoo... thats me atta glance. introductions said, perhaps a comfort zone has been established in my wary-ness of blog drama.
more to come when my life gets a little more interesting? maybe some of you could help, eh? im currently looking for some new peeps with positive outlooks on life to influence and inspire me, greatly. any takers?

i used to work with a guy in his 70s when I lived in North Carolina.

finally, I asked him what the hell he was talking about.

and he said, every morning I wake up and don't it make my day.

and, if that ain't positive, nothing is.

My husband, (e:Uncutsaniflush) and i lived in the Mayflower when we first moved to Buffalo, just under 2 years ago. Not a crappy efficency for us, no sir. We had an overpriced underheated 2 bedroom 2 bath.

Like, love, and have some of the same musical interests as you. Adore the fact that Morrissey is in there twice... as would he, i am sure!

Hi and welcome!! I think I might know you from The Continental.