Damn Skippy at the Auto Bureau

My U.S. passport is going to expire next month. In New York State, you can get an Enhanced Driver's License (EDL) that serves as proof of Citizenship for the U.S./Canadian border so you don't need a passport. So I figured what the hell, I'll get an EDL.

Yesterday, the Lovely Lettuce ((e:leetee)) and I went to the Erie Auto Bureau on George Urban. And believe it or not, it was a damn skippy time!!

We were in and out of there in under 20 minutes.

It was very organised. The "maze" that made me feel like I was a cow being led to the slaughter was gone.

People were issued numbers and could sit until their numbers were called. My number was called before I could sit down.

The clerks were pleasant, professional and efficient. It was a huge contrast to the horrific nightmare that was the DMV in lower Manhattan in the 1980s. (At the time, there were people would hire themselves out to wait in line for you and call/page you when it was almost your turn. It was worse than it sounds. 'nuff said.)

Good work, Kathy Hochul. I hear that she's running for something and I don't want anyone to think that this is some sort of political endorsement. For all I know, I may hate her politics but she made my time at the Auto Bureau damn skippy.

(e:metalpeter) - for air travel to Canada (and every other country) you need a passport. The Enhanced Driver's License and the passport card are good for land and sea travel in North America and some Carribean counties.

I have no Passport and Have no enhanced ID so this may be incorrect the form you got is good for land travel only not flights To Canada and Mexico ? It gets confusing cause there is also what they call a passport card......

This is the error message that I get when I try to upload an ogg file using drag and drop. Also, I don't think that ogg is recognised file type for the "upload files" button method. 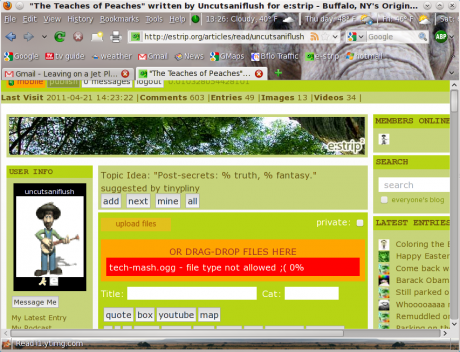 I reckoned that it was you, (e:paul) and not (e:terry). Terry has many talents but I'm fairly certain that coding (e:estrip) isn't one of them.

Oops I wrote that not (e:terry). I was on his computer and forgot to log out.

Thanks for taking care of this so fast. Hopefully it didn't take you away from other stuff that you needed to do. Thanks again.

It should be allowed now. Its using the HTML 5 audio tag, not sure what the support for that will be. Either way it adds a download link.

I will add it tonight.

The Teaches of Peaches

Miss Piggy and "Fuck the Pain Away"!!! The teaches of Peaches, indeed.

I can't stop watching this... why did you do that to me?

The Doctor Says No

A reminder about the triumph ofï»¿ intellect and romance over brute force and cynicism.

"But youï»¿ have no weapons, no defenses, no plan!"

"Yeah. And doesn't that scare you to death?"

union says no too. how interesting.... :D

Better than when the computer says no...http://www.youtube.com/watch?v=_3mswfndknU