My friend Mary got very exciting results at her last doctor's appointment. She found that the cancer in her pancreas shrunk to a &frac14; of the original size. I was so relieved because if she didn't get good news she was going to stop all treatments; the side effects have really decreased her quality of life. Anyway, I have felt a little lighter ever since then and I know it has given her so much more motivation. It's been on my mind so much these past couple months that I can't imagine how she can be so strong. In any event, we were ready and thankful for the good news.

In other news, the past two weeks have been very enjoyable and productive. Since I finished my finals I've done so many things I've wanted to do for a long time. Here are a couple of the things I've done:

-When I'm in school the last thing I want to do is read for pleasure because I get so sick of reading for class. In the past two weeks I've read three really interesting books (I'd recommend them but they're so specific that I really don't think anyone's interested).

-I'm also a documentary fanatic so I planned on rewarding myself for getting through this semester by renting a bunch of movies that I've wanted to see. To do that, I had to get up enough courage to rent movies by myself (I don't know why but it always made me feel really self-conscious before). I've watched at least 4 in the past two weeks and I would definitely recommend at least two of them. One, The Weather Underground, was about a protest group in the 60s and 70s called the Weathermen (a la Bob Dylan's lyrics). The other, which I watched with (e:Jessbob), was called One Day in September, and was about the Munich hostages. Now, I've seen a bunch of movies I've wanted to see and also conquered my weird fear of renting movies alone.

-I made a scrapbook for Mary. It was such an ordeal because I had to have people send me pictures and write letters. Plus, I kind of despise scrap-booking (I don't have the patience to cut all those little tiny pieces of paper and make my very own 3-D beach chair on each page). I think it turned out well and I know she will really enjoy all the old pictures. I had the best time looking through all of them!

-I FINALLY made my mosaic. I have been talking about making a mosaic table with my mom for years. I saw a mother and daughter do it in a movie and I kind of became obsessed. Unfortunately, my mother, the woman who majored in art, had no interest in making a mosaic with me. I even bought the table a couple years ago and she threw it out! So, I decided to make it on my own. I bought some glass and mirrors, broke them up, glued them to the top of a bookshelf, grouted it, glazed it, and voila, a mosaic bookshelf. I'm really happy with it. My mom wants me to do the entire wall in our spa room. We'll see about that one, since this took me two days for like 3 square feet. 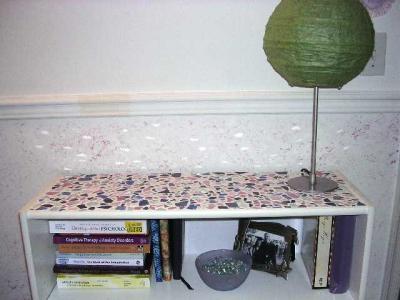 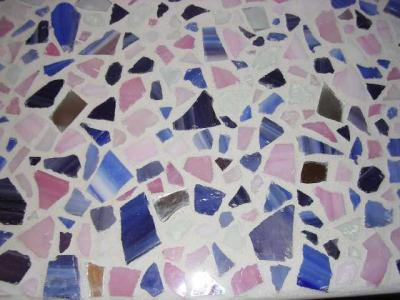 -I bought a chair at the Salvation Army, made a slip cover, dyed it a now I have a comfy purple chair in my room. I still need to fix all the seams because my sewing machine is at school, but it looks nice for now.

-Finally, this is not a crafty thing, but I feel good because I got up the courage to stick up for myself to a couple people recently. I usually let things go pretty easily. I don't like to fight or complain to people too much. I can be really critical, but I know that about myself, so I try to keep it in check most of the time. Recently, though, I realized I have become a total doormat. It felt good to be honest about how I was feeling. Of course I got apologies and promises of change, but I guess I'll see what really happens. I don't want to lose any friendships, but hopefully I didn't wait too long and things can still be fixed.

Well that was a lot. Unfortunately the party is almost over and I will be going back to school on Saturday. I'm going to try to enjoy my last week home and see everyone I can. School seems so far away.

Thanks to both of youy for the support. I really believe that every single person who thinks kind thoughts about Mary has helped her come this far. I can't thank you enough.

(e:codypomeray), the pieces are all glass. I would like to use beach glass I'm sure that would be very elegant. Also, I thought The Weather Underground was really good. It showed how protests for peace turned into terrorism. I was shocked but it's one movie that I think everyone should see. (Another is called Blindspot, an interview with Hitler's secretary. It's amazing what people can take part in if they don't ask questions!)

Very glad to hear about your friend, Mary's test results. That is such good news. I hope she continues to do well.

Your mosaic looks really nice. I say if your mom wants you to do more, she has to help this time. It has to really be a mother daughter thing. :O)

Congrats on being brave and telling people how you are feeling. If you felt like you were being a doormat, and you stood up for yourself, then i say bravo to that!

oh and that is great news about your friend mary. hopefully she will continue to get better and regain alot of her strength that the treatments have more than likely zapped from her. best wishes, and thoughts.

WOW, I love your table. looks really really cool. a friend of mine is making a table she found out to the garbage into a Georgia O'Keiffe painting. I am not sure which one she is painting on to the table top, but she does amazing work. Is that blue glass on the table? If you plan on doing that again, try using beach glass! great job! Was the weather undergound good?

Tomorrow night John Stossell is doing a special on education in America (10pm on 20/20, I think it's on abc?) . It looks really interesting but really slanted. Apparently he is arguing for a voucher system for all schools, not just private. The fact is, the longer American students stay in our schools the more they fall behind students in other countries. In fourth grade our kids match up with kids in Belgium and by high school we are years behind. It's scary when you think about it, and since I started grad school that's all I've been thinking about. There is no simple answer to fixing our schools. The inequalities of our educational system are really appalling (for anyone interested an amazing book came out recently on the issue by Jonathan Kozol called The Shame of the Nation). I have great respect for teachers, but the profession is really not set up for quality control at all. Furthermore, schools do not implement research findings that could improve student achievement. Developing literacy programs has become a business and marketing agencies have better success at getting districts to buy their packaged programs that education schools. And don't get me started on the enormous mess that is No Child Left Behind (this statement is purely from an educational researcher's point of view, and not based on politics). Of all of the government services provided, it is my (biased) view that education is the most important AND least successful. In any event, I will be watching, or at least taping, the special tomorrow night.

I watched it last night and it was very interesting. However there are a couple things that they didn't touch on that if they had more time should have been mentioned. The first is the importance of schooling. It is my belief that it is taken much more seriously in other countries then here, that is one big factor to why they are so far ahead. I think competion between schools is a good idea. But I don't understand vochers. You give a kid money so that they can go to another school. But shouldn't all kids get them and be able to go to better schools. But if you did that for everyone why not just improve the schools they are at. In any event it was verry interesting.

I'm watching the Stossel piece while sitting here in my hotel in Seattle. The bottom line is that he's right about the system as it is. To say that its a system that works is an absolute joke.

I tend to agree with Ajay's outlook on the solution to the problem, although it really isn't a political issue. Ultimately money isn't going to solve the problem, and I think that our schools could learn alot about improving education by looking at what schools that outperform ours are doing.

Theres a reason why teachers unions and public education officials are afraid of competition.

City school districts tend get stuck with the most expensive students. Special needs, medical services, kids with serious disabilites. The average for the district is $10k per child, but the median is ridiculously lower. The vast majority of students aren't getting anywhere near $10k worth of education.

Over the years, two things have happened.

On the left side, the teachers have unionized and are always bitching about explicit or perceived slights (and yes, the pay isn't that great either; but blame the unions for that, AFAIK).

On the right side, the Religious Right has been hacking away at the roots of the educational system, upset by the fact that their kids could be taught about scary things like Evolution and Birth Control.

We need a middle ground. There's no lack of funds. City of Buffalo spends $10K/year per child. That is a _lot_ of money. I say they should give the teachers raises while firing the unqualified/unmotivated ones; and pay for this by cutting back on the administrative overheads. There are just too many layers of bureaucracy. Also, teachers need to realise that they have to work with the kids that they get. If the kids are coming from broken families and are lacking, then they just have to work harder.

The educational system is a mess, but its not for a lack of funding. Washington, D.C. spends approximately $10,000 per student per year, but consistently ranks as one of the poorest systems in the nation.

I think the solution is to actually enforce stringent standards - in the USA right now the &quot;feel good crowd&quot; is in. Its easy to see that standards are secondary to self-esteem.