Man With A Plan...of the Week!

Haha! Guess who's been AWOL lately? Yup, me! I'll take another stab at this. I know I sort of just dumped food concoctions here in the past (and I'll probably do it still to some extent), but I'll stick some more meaningful stuff here as well.

I'd like to just outright cross-dump from my blog, but since I'm writing my posts (in MarsEdit) in HTML, I don't think estrip will like that very much when it comes to parsing this text-box out. I should probably adopt estrip more-so for a mobile-blogging platform. Didn't (e:paul) make an Android app or something for this?

Anyhoo, so I'm plotting out weekly agendas for dinner. This has epically failed every time in the past, but I'm trying to go easier on myself this time. I'm also making it a goal to cook out of The Silver Spoon at least once a month. Finally, I'm trying to use this as a way to better learn to scale recipes for one (while I'm still single, as my roommate doesn't partake in my dishes too often). Anyhoo, here's a list of what I'm planning for the week so far:

Tuesday: Crockpot ranch turkey tossed with green peas and rotini, and an Indian sweet dish of sorts (It is some sort of sweet carrot and cashew dish that Siva, our current rotation student in the laboratory, described and encouraged me to try. I am going to tweak the dish a little bit and add in some shredded coconut at the end to add even more deliciousness to it!).
Wednesday: Cream of garbanzo bean au gratin, followed by pork chops with blueberry sauce (this should intrigue (e:janelle) I would imagine, if she sees this).
Thursday: Homemade pizza, predominantly onion, tomato, and mushrooms. Maybe some meat if I have leftovers from either of the above two dinners.
Friday: My awesomesauce spaghetti (hah! punny!), with broiled garlic cheese bread or sage and rosemary bread.

I'll sneak some photos in as they come to be!

If you're bored, you can go read the slew of reverb10 posts I dumped in my blog for the month of December.

xposted over at my personal blog

There is a mobile app for android. Just search estrip in the market place. Its free. I post like 80% of my entries that way.

I get stressed, I cook. Here I am at it again! 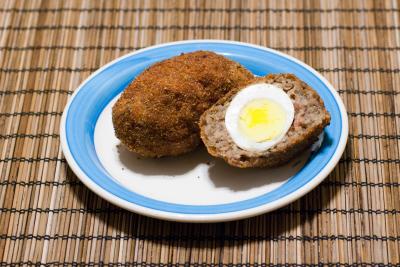 I need to find a way to firm up the sausage and make it thinner to wrap around the eggs. It's tasty as it is, but it's a little heavy on the meat. Uffda.

I didn't even realize they were wrapped in anything but a thin breading; it looked pretty thin when I had it, and didn't pay that much attention to whether or not there was something in between the breading and egg.

And now that I know what the sauce is, I can make that too! Thanks (e:jbeatty)!

Mortadella? That stuff makes ham look like health food. I need to get it now.

The sauce is basically garlic Mayonnaise. Or Aoili if you want to give it a fancy name.

Sorry to be a downer but the scotch eggs at Europa are surrounded in Mortadella. They are my favorite treat there.

I don't think something all gussied up at Europa would really give you the essence of hard-boiled eggs.

@(e:jason): I have seen chervil @ Pricerite.

No meat-versions at Europa? I'd be interested. Anyway, I need to find out if I really like hardboiled eggs or not. Do they taste very eggy? I think the eggy-ness puts me off in any egg dish.

BTW, where the hell do you get chervil??

Scotch Eggs have to be unbelievable. I looked them up the other day. Eggs, coated in sausage??? Breaded, right? That has to be the best breakfast on the go. I'm definitely in.

The ones at Europa are just hardboiled eggs with a light breading and fried, no meat involved. They do serve it with some mild sauce that reminds me of BÃ©arnaise, that does go well on them.

Are hipsters eating scotch eggs? I will never understand them.

That is a food I have only ever admired from afar. It looks like... so much.

How does one know when to say, "No, that's enough, I've spent enough time doing this?"

I am chronically wondering if I could have tried harder, despite the futile energy it feels it is taking up. I mean really, how much is too much?

I am also driven by the concern that what if it really has not been hard enough? Physical energy can be quatitatively estimated. Emotional energy can only be evaluated qualitatively, and thereby is looked upon by others arbitrarily, and can be judged as such. I know I shouldn't be concerned what people think about that, but hello, that's me!

Worse yet, how do you know when to come back to it with a fresh mind and try again? I can't help but feel that this emotional/mental fatigue is a consequence of taking a break, and then feeling personally guilted into resuming the battle as opposed to really having cleansed the original incident from myself.

Just feeling mentally/emotionally discouraged (although physically I'm quite wiped as well, but that's another story). I'll get over it. However, I really hate feeling torn between what is enough and what isn't.

*Cross-posted over at my normal blog as well.

(e:paul): Then I probably got it about the way I wanted it worded. It's a handful of things in my life (work and relationships primarily) that seem to just be wearing me out, and they're all a similar situation of "do I keep working/dealing with it," or do I "just start ignoring it/them."

(e:tinypliny): Unfortunately, my subconscious assertiveness doesn't kick in until sometime after the situation has been dealt with. I've got remarkable after-the-fact reasoning and reactions, but some part of myself doesn't pull it into focus quickly enough in the situation as it's happening. I'm slowly bringing those two together, but frustration quickly sets me back; it's hard to keep my cool together when I need a quick resolve before things make themselves worse.5

Maybe you like repairing your house, Paul? :) Maybe it's like this interest-on-the-backburner that you like but can't justify the time being spent on it and the returns that you are getting.

I have no idea what the focus of your issue is but I could take this entire journal word for word and be talking about trying to repair my house and it would apply perfectly.

You should listen to the small subconscious assertive voice that definitely sounds like the right thing to do.

Now, for some biased answers to your abnormal blog here.

Depends. If you like what you are doing and expect promising results on the horizon, chase it with more positivity. If not, just wrap it up, make the best of it, hunt for more fertile pastures.

If you feel its draining your energy, then you definitely don't like it. Stop. Reevaluate. Wrap up. Start anew.

It's hard enough when you feel out of energy - any kind of energy. Time to step away.

You can't force a fresh mind. If you feel something is promising enough, fresh ideas and way to get them will suggest themselves to you in time - because you believe in the potential of the idea.

Can you tell I'm enjoying myself today? 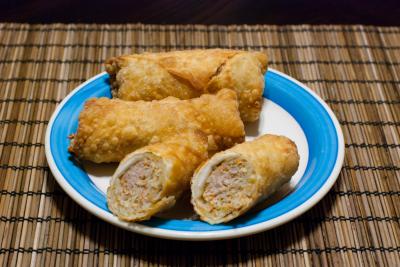 QlinArt
These Vietnamese imperial rolls need a little work. I cheaped out and used typical egg rolls wrappers in lieu of the rice wrappers, which I don't mind too much. However, they definitely need some zing, pizazz, something! I think round 2 will involve introduction of some garlic or oyster sauce, and some chilis.

Between the two dishes today, I have leftovers for virtually the entire week. At least for all my lunches this week!

Man, I'm not even sure if I'll be able to squeeze in some tater tot casserole at this rate before making Scotch eggs this weekend.

Thanks for the link! I love Vietnamese food and her blog with recipes looks great! 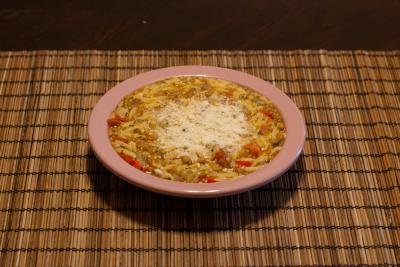 Lentil & pasta soup, actually!
(Passions to pastry)
Very delicious. This was my second run making this recipe. I was intending to swap half of the orzo in it for barley, but I realized at the last second that I no longer possessed any barley. However, I've been exchanging the lemon juice (which I do not have presently) for lime juice (which I do), and it has tasted just fine as such.

I've recently gained a striking interest in lentils, having tried them for the first time at Amy's Place a couple weeks ago. I cannot believe I haven't tried them before, for as tasty as they are. Regardless, I've lined up a slew of recipes with which to eat them, so I'm hoping they will all be delicious!

P.S. Here's the reference to my introduction (if you didn't already catch it).

Red lentils are different from the lentils you probably made. They start out looking pink/red, but cook down into this soft orange mush. I was completely shocked the first time I cooked them and had to check to see if I had done it right. And they have a different flavor than other lentils.

Re: (e:janelle) - I can't say that I have. This is my first time really taking a stab at anything "lentils." Is there a pretty distinct difference between some of them?

Re: (e:tinypliny) - I've yet to make it over there, despite my friend's recommendation to check it out. However, I'm quite impressed by the Lexington Co-op's big bulk-pouring containers of them1. I never really checked it out much before, but lentils were one of the items I was not expecting to see!

Have you tried red lentils, yet? I cook up a batch of red lentils and then eat with a dollop of yogurt and some caramelized onions.

That looks good. I think I will try it.

You tried lentils for the FIRST TIME a couple weeks back?!! You are not really from this planet, are you?

(hehehe... Check out spice market/super bazaar someday. They have a minimum of 25 different kinds of lentils and dried legumes.