I have decided to quit smoking. I have not bought a pack of ciggs since Wednesday.

I thught I was going to get past the being depressed and stuff part, but today, it hit me. I have taken a drag or 2 from a ciggarette here and there, but have not had a full one in days.

Quitting is easier said than done. I have patches, but its just not enough. When I get bored, I want to smoke. After a few hours of working, I want to smoke. If I am on the computer, I want to smoke. Its really hard and today, just not too long ago, it hit me and I am now startig to know what withdrawls feel like. I hate it and it feels as if I was a heroin addict, and have not shot up in 4 days. I don't like it, but I hoipe it will pass soon.

I don't have much in the way of words of wisdom for you. I quit smoking about a year and a half ago after smoking for 25 years. I didn't do it in a typical way and i hate hate hate to exercise. All i have to say to you is... good luck and don't give up, you can do it!!! :O)

I used the gym for two months or so then broke myself from the gum. I think I increased my narcotics intake too. I took me six months to stop constantly thinking about it but maybe you'll be lucky and won't have an obsessive complex about it.

It will get easier everyday and just tell yourself every month that you have to make it to next month and so on.

Now that I have broken the addiction I do my damdest to stay away from them cause it is so easy to become addicted again.... Although when I was in Vegas I had a couple and when I was in Florida I bought a pack or two. Nevermind that part!

I know it's hard, but it gets easier. I agree with (e:paul), excercise is key. It has been two months since my last smoke and the days I work out are so much easier. You eventually stop thinking about it less and less. If you were a heavy smoker like me, you will always be addicted. I quit for two years before and I started up again like I had never stopped. Keep us posted.

I quit smoking in december (after like 10 years) and never had another cigarette. Lots of pictures of diseased lungs worked fo me. I mean I know its gross but just start looking them up whenever you crave cigarettes. Also, the gym helps or some other form of intense exercise.

Th other most important thing was not hanging with my smoker friends for a bit.

what you described is not really the craving for the nicotine, but the behavior. when you're bored, on the computer....you must find something little you can do to replace the old one, perhaps a squishy ball. you can do it!

Good luck! I agree with (e:jenks), it's better than smoking. Your lungs will thank you in a few weeks :o)

good luck to you... the gum worked well for my mom b/c you can chew it when you have a craving, unlike the patch. Two years later she still chews a lot of it, but I guess it's still better than smoking.

Yesterday, the Department of Justice released the video from a security camera of American Airlines flight 77 hitting the pentagon.

JudicialWatch.org Filed a lawsuit in Deceber of 2004 to request that security footage be released through the Freedom of Information Act. Although the DOD released the security tapes from the Pentagon, Officials stated that other tapes from the Citgo Gas station, the Sheriden Hotel "DO NOT EXIST"

What a load of crap. you mean to tell me out of all the what 100 cameras pointed at the Pentagon (the same exact spot where the plane hit) that only 2 cameras recorded te event? I highly doubt it.

Judicial Watch has posted the new video released yesterday and the other video that has recently been featured in the Google Video: Loose Change.

What is different from these videos? Any comments are welcome.

What I don't understand is: why the need to keep this video secret? It's not like people didn't see what happened? Honestly: what possible reason was there to hide these tapes?

There were many other cameras which captured events in that neighborhood. Why haven't their contents been released? Cameras like the one on the Shell station nearby, the hotel security cameras, etc. (all of the tapes were seized immediately, so they haven't been erased).

The cynical answer is: this release is timed to fan the flames of 9/11 to boost someone's sagging ratings.

From what I can see the released videos do not disprove the conspiracy theories. Certainly numerous events of 9/11 seem fishy, but I just don't understand why it would be necessary for the government to damage the Pentagon themselves? I can't see what their motivation would be. I mean when most people think of 9/11 they think of the World Trade Centers, not the Pentagon. The attack on NYC alone was enough to scare the people into blindly following their government. My big question is this...why do so many people in this country think Bush is tough on terrorism? I believe they had enough info to thwart these attacks, but didn't (I don't know why). Yet Bush gets to go around with this wierd reputation of being tough on terrorism? I just don't get any of this mess. 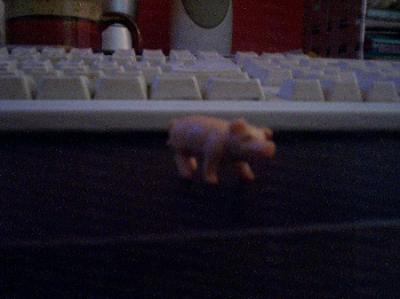 Actually its a tiny rubber pig about the size of a quarter or smaller :) If you lost a pig let me know ;)

Well the Sabres are doing great. Its about time a Major Buffalo tem does well :)

Sorry I am not around much. I work a lot and am writing a lot too.

Drunk people suck. Especially when they steal a bopttle of wine from the resturaunt and then get cought by the cops :) That happened last night among a near fight that also required the police. I a so glad I am not working tonight, because if the Sabres win, I do not want to be in that resturaunt when they do :)

Not much has been going on with me. As I said, my sis will br fine. Thats a relief. My Mom just had her birthday and I am loving this sunny warm weather. Boy have I missed it.

I noticed a news feed now. Sweet. How about adding Wikinews to it ;)

Anyone going to Dunn Tire park today, or to the Sabres party? let me know, I want to tag along :)