My (sort of ) brother-in-law made this funny short film about George W. Check it out. 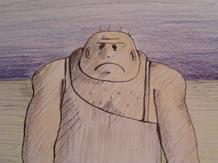 Sign up for the next Green Party Meet-Up at

and vote for a venue.

It's so beautiful out and I'm stuck inside, not even accomplishing anything. Today isn't a day to be productive. It should be spent laying in the grass. Alas...

I received this email from a former co-worker yesterday.

"Apparently there is only one company in the US that is certified to inspect
and approve electronic voting hardware (which is how >50 million people will
vote in November)."

The company is Wyle Labs, a subcontractor that my company has been forced to work with. They are the MOST INCOMPETENT people with whom I have ever interacted. They are responsible for providing us with data for some of our Navy projects, and have f**d it up every single time. Sometimes they give us the wrong data format (even though we've worked with them for 3 years), sometimes they give us data months late, and in one recent experience, the IT person could not understand how to place files on our ftp site.

For more info on electronic voting, check out this link

Silly stuff-
I had an argument with someone over art bombs. Maybe some of you can guess who it was. What is the problem??? How can you be anti art bomb? Why don't you argue with people about real bombs?

Political stuff-
What is the point of having a 9/11 commission interview without any kind of formal record? Enough said.

And finally-
I'm leaving for California today. I hope some of you will take care of my Desi for me while I'm gone.

Where do I start? Great wedding and reception at Fat Bob's. Crazy night with flacidness.

And then the party. Fireworks getting shot at cars and houses. Drunk girls falling all over the place.

A couple interesting emails and links

Check out this site about the rigged elections in Florida!

...my brother Jeff sent me the link to an interesting and provocative mosaic of Bush made up of images of all the American soldiers who have died in Iraq. ...you decide!

excerpts from posts at the site...

"...Since you bring up the Saddam’s chemical attack on his own people, as a way of deflecting criticism of our moronic President, let me pose some questions:

1) What did Ronald Reagan, as President in 1988, do following Saddam’s gas attack on Halabja? (Answer: He vetoed a bill (The Prevention of Genocide Act of 1988) to impose sanctions on Iraq for its use of chemical weapons.

2) What was Collin Powell (then National Security Adviser) and Dick Cheney (then a Republican congressmen’s reaction? (Answer: Secretary of State Colin Powell orchestrated Ronald Reagan’s decision to give Hussein a pass for gassing the Kurds. Dick Cheney could have helped push the sanctions legislation but did not.)

3) Did George H.W. Bush as Vice President, or as President cut support for Saddam after the chemical attack, and before Iraq invaded Kuwait in 1990? (Answer: Classified documents obtained by The New York Times show a long-secret pattern of personal efforts by Bush to support and placate the Iraqi dictator. Repeatedly, when serious objections to helping Hussein arose within the government, Bush and aides following his directives intervened to suppress the resistance. [Frantz and Waas, “Bush Secret Effort Helped Iraq Build its War Machine,” Los Angeles Times, February 23, 1992] .

4) Where was the public outrage of George W. Bush (the current President) at that time (Answer: He wasn’t outraged, because Saddam was our ALLY at that time).

5) Why use these chemical attacks as a justification for war FIFTEEN YEARS AFTER IT OCCURRED? (Answer: because you need a rationalization to send hundreds of Americans to their deaths)

6) Where was George H.W. Bush’s outrage over the use of chemical weapons against Iranian forces during early 1986? (Answer: He wasn’t outraged).

8) Why don’t you mention this in your excoriation of Saddam? (Answer: You probably weren’t even aware of it).

The next Green Party Meet-Up is scheduled for Tuesday May 4 at 7:00 pm. It looks like the potential venues are all in suburbia, but I can give people rides if they are interested.

There are currently 4 members, and we need at least 5 to have a meet-up. Join! Join! Join!

My roommate Desi returns from the Dominican Republic today. It will be good to have the wifey back.

I went to a certain restaurant on Transit for lunch yesterday. To my shock and dismay, the original text of the below lie-infested email was hanging up at the restaurant. I was so enraged that I googled "Bush Took Care Of It" to see if there was a site where I could post a response. Fortunately, on the first site I hit, I found several responses correcting this piece of trash. I've marked the respondent's comments with ****.


After the 1993 World Trade Center bombing, which killed six
and injured 1000; President Clinton promised that those
responsible would be hunted down and punished.

After the 1995 bombing in Saudi Arabia, which killed five U.S. military personnel; Clinton promised that those responsible would be hunted down and punished.

After the 1996 Khobar Towers bombing in Saudi Arabia, which killed 19 and injured 200 U.S. military personnel; Clinton promised that those responsible would be hunted down and punished.

After the 1998 bombing of U.S. embassies in Africa, which killed 224 and injured 5,000; Clinton promised that those responsible! would be hunted down and punished.

After the 2000 bombing of the USS Cole, which killed 17 and injured 39 U.S. sailors; Clinton promised that those responsible would be hunted down and punished.

Maybe if Clinton had kept his promise, an estimated 3,000 people in New York and Washington, D.C., that are now dead would be alive today.

That being the case, why was it that the Clinton
administration spent more money chasing down Bill Gates
over the past eight years than Osama bin Laden?