Paul - I am all for a Flash primer. It's one of those things I could learn on my own, but a class would provide some motivation - something I've been lacking lately.

You Can't Read A Book By Its Cover

Can you believe this guy was the head of a group that is responsible for killing 377 people? 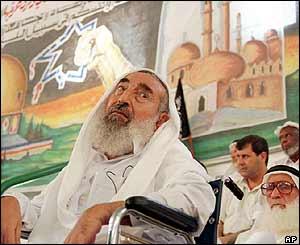 I know for a fact that I am not the biggest Dylan fan in the world. I'm probably not even the biggest fan on my street. Which is why I was so unbelievably lucky to see two great shows last weekend.

I'll leave the music review to the pros. But I will say that during "All Along the Watchtower," I had to pinch myself a few times to make sure I hadn't gone to heaven.

Thanks to Jeff, Kim, Dave, Dave, Connie, & John for being such great trip companions.

And special thanks to jw for the best cookies ever.

I hate to tell you, but you do have friends.

In any event, you celebrate it (or don't) any way you want!

Nevertheless, if you're going to celebrate any Christian holidays, you may as well celebrate this one. Although we don't know too much about St. Patrick, we do know that he was one of the first Christians to speak of women with respect. And Thomas Cahill writes:

"For a decade, gay and lesbian Irish-Americans have sought permission to march in New York's St. Patrick's Day Parade, and for a decade they have lost in court. Cahill, among others, has allied Patrick with gays and lesbians. Cahill's Patrick is a muscular progressive. He was a proto-feminist who valued women in an age when the church ignored them. He always sided with the downtrodden and the excluded, whether they were slaves or the pagan Irish. If Patrick were around today, Cahill says, he would join the gay marchers. "

So, in the spirit of celebrating progressive saints, as well as the vernal equinox, I'm heading to Mixer's tonight, where my roommate is bartending. If anyone wants to come, it's located at 1797 Niagara Street. If you've never been there, don't expect too much.

Happy Birthday Jill! And make sure you go out and celebrate!

For those of you that know our friend Sheleigh, she is moving to Long Island. She is having a going away party on Friday and would like to have as many peeps as possible. Unfortunately, I will be out of town, but if anyone is interested, call Desi for details.

I love the new banners (especially because there are maps involved)! I also really like the "latest updates list" and the "email a journal" functionality. Go webmaster!

Rep. Henry A. Waxman has sponsored a searchable database of misleading statements made by the Bush Administration regarding Iraq

. It includes 237 statements made by the Administration on 125 separate occasions. My favorite:

"QUESTION: When I was in Iraq, some of the soldiers said they believed they were fighting because of the Sept. 11 attacks and because they thought Saddam Hussein had ties to al Qaida. You've repeatedly cited such links. . . . I wanted to ask you what you'd say to those soldiers, and were those soldiers misled at all? VICE PRESIDENT CHENEY: . . . . With respect to . . . the general relationship. . . . One place you ought to go look is an article that Stephen Hayes did in the Weekly Standard . . . That goes through and lays out in some detail, based on an assessment that was done by the Department of Defense and forwarded to the Senate Intelligence Committee some weeks ago. That's your best source of information. I can give you a few quick for instances, one the first World Trade Center bombing in 1993. QUESTION: Yes, sir . . . . VICE PRESIDENT CHENEY: The main perpetrator was a man named Ramzi Yousef. He's now in prison in Colorado. His sidekick in the exercise was a man named Abdul Rahman Yasin. . . Ahman Rahman . . . Yasin is his last name anyway. I can't remember his earlier first names. He fled the United States after the attack, the 1993 attack, went to Iraq, and we know now based on documents that we've captured since we took Baghdad, that they put him on the payroll, gave him a monthly stipend and provided him with a house, sanctuary, in effect, in Iraq, in the aftermath of nine-ele (sic) . . . the 93' attack on the World Trade Center. QUESTION: So you stand by the statements? VICE PRESIDENT CHENEY: Absolutely. Absolutely. And you can look at Zarkawi, (Abu Mussab) al-Zarkawi . . . Who was an al-Qaida associate, who was wounded in Afghanistan, took refuge in Baghdad, working out of Baghdad, worked with the Ansar al Islam group up in northeastern Iraq, that produced a so-called poison factory, a group that we hit when we went into Iraq. . . . We'll find ample evidence confirming the link, that is the connection if you will between al Qaida and the Iraqi intelligence services. They have worked together on a number of occasions."
Source: Transcript of interview with Vice President Dick Cheney, Rocky Mountain News (1/9/2004).

Explanation This statement was misleading because it asserted that Iraq was providing support to al Qaeda. In fact, the U.S. intelligence community had conflicting evidence on this issue and was divided regarding whether there was an operational relationship. The statement also refers to the Ansar al Islam group in Northeastern Iraq without acknowledging that this area was not controlled by Saddam Hussein.

It seems like nobody really knows much about St. Patrick other than that he "drove the snakes out of Ireland." He actually converted a lot of people to Christianity, and the shamrock is a symbol for the holy trnity.

If you go to this site, you can email him.

Yes, that's right, you can email St. Patrick. I notice that the site sells a lot of Catholic paraphanalia. I have a sneaky suspicion that if you email a saint, which requires you to provide your own email address, you may get solicitations from the Catholics. I'm not willing to experiment, but if it's true, that's pretty rotten.

Experience:
- 15 minutes bartending at an upscale establishment in the vicinity of the beautiful Niagara River

Qualifications:
- Willing to mix crazy concoctions
- Able to turn a bar into utter chaos
- Free drinks for everyone because we don't know how to use the register

Lilho - I'm sorry he turned out to be a pig. We'll find you a good one.