Wishing you all a peaceful, joyous holiday
shared with someone you love.

Wishing you the best of everything this holiday season and for the new year! :)

While I'm trying not to let this stuff make me crazy, this is the third incident of this type reported in the news in as many days. I can say that I won't be staying late at work anymore unless there is at least one other person staying who plans to leave when I do - a sensible position no matter the circumstance.

Reported in the Buffalo News

A man was attacked and robbed Monday night on Niagara Street after he was approached by a group of about 15 males, according to Buffalo police.

The victim, whose age was not immediately available, told Central District police the incident happened at about 8:15 p. m. between Carolina and Virginia streets.

He told police he was punched in the face at least eight times, including once with brass knuckles.

The victim also said he was kicked in the back, and his cell phone and baseball cap were taken.

He may have fractured his right ankle while running from the suspects, who fled east on Carolina on foot, according to the report.

Exactly! :( How *does* one respond to this? Mass panic is foolish. Total disregard is unwise. We need some kind of "suggestion-box-response" outlet where the police let residents know what is the actual situation and what their information status is. Does such a thing exist for Buffalo?

I understand feeling funny about attacks at the same places where you go. I know I feel funny when I hear of things happening near where I live, because (e:Drew) and I tend to walk our neighborhood a lot.

And there have been day time attacks around my building where I work and I'm in and out of the building to go places throughout the day.

I don't want to sound too crazy here, but I have what I like to call the "crime watch triage". It's around half-hour of intensive crime news reading and decisions every friday night/saturday morning.

I don't do this everyday because that would be totally insane. But the objective is to be aware of all reported crime, map it and adopt safer ways. Just to make it clear, it's not really Buffalo specific. Buffalo is actually a safe haven compared to some of the other places I have lived and worked.

The triage consists of a quick scan, map and time of the incident, assessment of whether I am likely to be next, and future precautions to make that unlikely. Some of the things that have come out of this (specific for Buffalo) have been:

- I don't walk in the south-side pavement in front of my building after dark.
- I don't go shopping at Guercio's weekday evenings.
- I don't wait at bus stops more than 10 minutes and time my transfers very close.
- I avoid main-street as far as I can and walk on residential side-streets.
- 75% of my path from home to office and back is covered by some kind of surveillance.
- I don't wait at the tube station at lean/non-rush hour times.
- I don't go walking downtown weekdays after dark.

That's a lot of restrictions on my "lifestyle" but I accept these as decisions from the triage. These gang violence reports have been out of the ordinary and I am not sure how to respond to them. They are not crimes committed by one individual against another in an opportunistic environment. They really smell of some disturbing mob mentality that I have witnessed first hand in the walled city of Old Delhi.

As (e:libertad) says in his journal -> (e:libertad,47100) I have been at these very spots at those very times in the past. I am not really a street-fighter so yes, I am concerned about these particular reports. :(

If you read the Buffalo News crime section, there's usually some act of violence or incidence that takes place in this city everyday.

The City's Civil Service website has some exams posted (filing deadline is Wed.). Also, at the bottom of the page that this link takes you to, there are some provisional jobs posted. For anyone not familiar with the city lingo - that means there is no existing hiring list for the position and that people get the job until the exams come up again. They then have to pass the exam at the top to keep the position. Someone can potentially be in a provisional job for a couple of years before the exam comes around though.

Also, though it's not on the website, my understanding is that the school district is hiring teacher aids/assistants and I think they may have some clerical positions available either provisionally or temporarily. The HR dept. for the Board is on the 7th floor of City Hall - rooms 719 & 720.

Well, Iâ€™m almost done with my Christmas shopping. I have a few gift certificates and a few books still to pick up, and Iâ€™m waiting for several things to be delivered; otherwise, Iâ€™m pretty much done. Yea!!! I even spent some time this weekend wrapping and got almost all my family stuff wrapped. I still have friend-of-the-family gifts to wrap, but thatâ€™s not too bad. My house looks like the Christmas wrapping bomb went off, and of course I still have baking to do, but I at least feel like Iâ€™m making some real progress and that I may actually come out the other side of this someday. Of course, I canâ€™t help but wonder if Iâ€™m sort of kidding myself about how close to being done I am, because, every time I turn around, thereâ€™s someone else I have to get something for - co-worker, daughterâ€™s teachers... Oh well, for now, I feel good.

Christmas bomb went off in my house 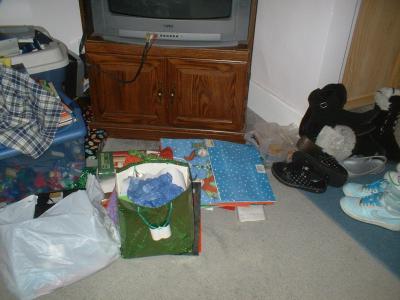 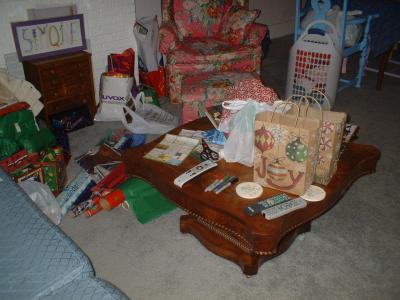 Also, had lunch over the weekend with my granddaughter. All she wants for Christmas... 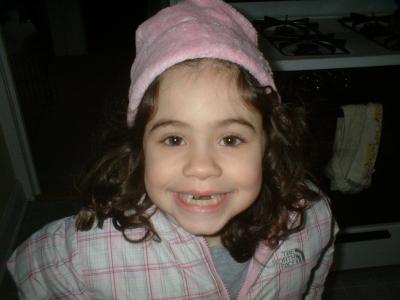 ...is her two front teeth! Hahahaha

awww! when I was little I was also missing my two front teeth and people would sing that song to me ALLLLL the time :)

Still fumbling along....wishing sort of a leap could be taken to NYE in a way. Would feel like a sizeable monkey was off the collective backside.

I'm so jealous... I want to be xmas shopping and wrapping presents and baking cookies and making candy. *pout*

Great picture of the granddaughter!!

I just saw a story on channel 2 news about a number of places in WNY with job openings. Don't know if anyone is interested, but these are hard times for many - hoping maybe someone can use this info. Here's a link to the channel 2 news story which has info on the jobs/companies hiring and some of the details.

Thank you very much Ms.Mama!

It's really crappy outside. This kind of reminds me of the just before Thanksgiving storm we had in 2000 when so many people got stuck all over the city. First, it was the thunder storm (which we just had) then came the snow/wet rain - which we're having now. Now I'm really wishing I were in for the evening but still have to go out in a little while - I have to start planning better and pay more attention to the weather.

I really don't ever want to see one like this again... it was kind of creepy weird.
(2000 Storm pic) 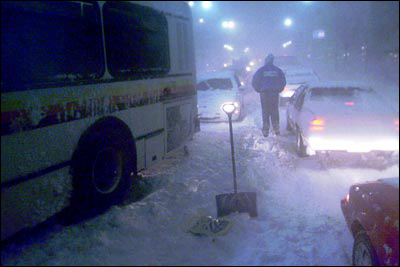 As fast as it came, it went. Was actually a pretty nice night a little later. Gotta love it.

Nice to see you out at the Battle again by the way.

I remember that. I've never been in snow so bad.