Why do I always manage to hurt the people I love?

Maybe tonight that's up for discussion...
I don't want him to think I'm a mistake.
That we shouldn't happen.
Because if anyone knows how perfect we are for each other, it's him :P

It's just that my life is disgustingly dramatic. It's a lot like high school but the drama is so much more grown up.
Instead of the boy in your AP US class, it's the boy from the sketchy fraternity that you *just* realized is the the most disgusting person alive.
Instead of your parents preventing you from having sex in your house, it's your roomate, your dog, your cats...

I'm sorry.
I love you.
This summer I am nothing but yours :*

All I will say is that Having your roomate there shouldn't stop you from having sex and neither should your pets. If the roomate is in the bedroom use the couch or vise versa. I wish you two the best of luck.

I got a new laptop today! :D
It's a Dell XPS... very pretty and fast...
I have a bad history with laptops though. This is my third in three years, even though the first one going wasn't really my fault. I blame it on my freshman year roomate, who spilled pepsi all over it. The second one might be my fault, but only because I'm klutzy. And very hard on technology :P
Hopefully this one lasts longer than the other two combined. If it doesn't, I'll be upset, mostly because it would only prove that I'm a failure at life.

The end of the semester always makes me giddy. Giddy in a "wow-i-can't-believe-it's-almost-over" kind of way. Then there's the stress that follows the giddyness. In my stupidity, I took 22 credits this semester. It probably wasn't the best move, but I wanted to get some of the credits I'd lost in transferring back. Now I have all this work that somehow piled up in the last week (Yes, I procrastinate but all of except one paper only got assigned within the last 4 days). And my poor little blonde head might just explode.

Speaking of my poor little blonde head, now that I'm in pharmacy school the color of it gets me in more trouble than it used to. My physics II lab group thought I was the dumbest person in the world at the beginning of the semester, and once i proved them wrong, they proceeded to kiss my ass. Just because I'm blonde, wear letters occasionally, and like the color pink does not make me stupid. But it does make you LOOK stupid for thinking that I was :)


And because pictures make everything more fun, and no one really knows what I look like, here are two of me :)

me in a playground tunnel (and yes, I'm a red sox fan) 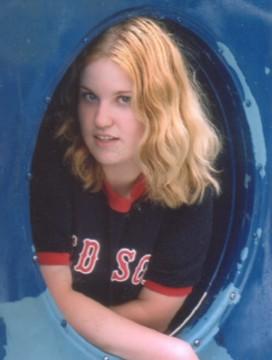 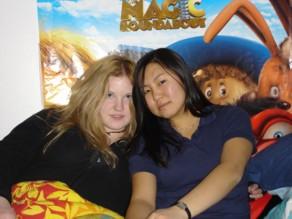 You are so cute! I love the movie Legally Blonde. Found one of my favorite quotes:

I was trying to think of a title for a movie that was about you (being blonde) going to school to be a pharmacist, but I can't think of any. Oh well.

This is going to be the typical "hi... this is my journal" entry.
Sorry to dissapoint :P

My name's Liz.
I'm 19 (I'll be 20 on May 12th, which is making me feel like the years where I can get away with being childish are gone).
I live in South Buffalo, with a roomate, and my extremely fun old english sheepdog (who my neighbor calls the monster that lives on our backyard). I grew up here, and even though most of my upbringing screams private school princess, I don't enjoy the stereotype and will fight anyone who tries to use it.
I'm a pharm D candidate at UB, and I work at Frederick's of Hollywood. It's a great job, just a little too personal for me sometimes.


Hm.
I think that's it for now.
I'll be more interesting later, I promise :) 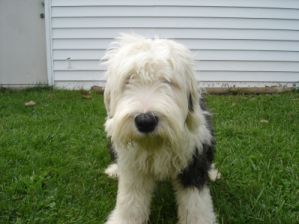 Welcome to the strip. That dog reminds me of that dog from the cartoons that can't see anything kinda funny sorry.

In terms of Fredicks of Hollywood I think that would be a great place to work (but I'm a guy). I hope you get a discount I'm sure you must. Do they sell guy stuff like Boxers? Being a single guy I don't want to be the creppy guy and then find out that they don't sell them.

Nice meeting you! Your dog is adorable.

please, I'm 28 and get away with acting childish all the time.

Lots of people post pics of their adorable puppies to the site - thank you for adding yours (and check out some of mine!)

Welcome to the site!